Coming Out of Your (World’s) Shell: Growing Up and Breaking Free with Cocona and Utena

As I’ve noted before, adolescence is weird. This is why, I think, we’re so fascinated by coming-of-age stories, and why we so enjoy framing them through magic, adventure, and metaphor, to make sense of this strange time of life while also exploring it in fun and interesting ways. The growth from the familiarity of childhood to the strange new realm of adulthood is often portrayed as a physical journey, but today I want to discuss when that growth is portrayed as an escape. The young heroes of these stories are trapped in false worlds that are comforting but somehow wrong, and revealed with the right self-awareness to be magic-laced and malign—places that the heroes ultimately must break free from if they wish to grow, progress, and find their true place in the world (and kiss the girls they want to kiss).

The “escape from Yuri Hell” episode of Flip Flappers is a pretty neat embodiment of this motif. Cocona, our young hero, travels to a magical otherworld with partner Papika on a routine magical girl mission, where the two of them find themselves trapped in a strange and haunted school. Both girls are initially horrified by the faceless students and the overall ghostly atmosphere, and attempt to escape… only to seemingly die and wake up the next day hypnotised into complacency. Cocona becomes part of the dreamworld, contentedly going through the motions of a day at the school in an endless loop.

With a little help and a little intuition, Cocona eventually re-realises that something about this place is off. There’s an intermediate period before she decides to escape where she’s kind of aware that she’s caught in an artificial and possibly harmful world, but also is kind of okay with that. Cocona has up to this point been primarily characterised by her inability—or perhaps reluctance is a better word—to make big decisions. She’s uncomfortable with change and feels ill-prepared for becoming an adult, so there’s no doubt that something about a never-ending loop of refined, quiet school life appeals to her. Here, she can continually and comfortably go through familiar motions… while at the same time getting closer to her magical girl partner Papika, testing the waters of her romantic feelings for her, but in a static world where there are no consequences. 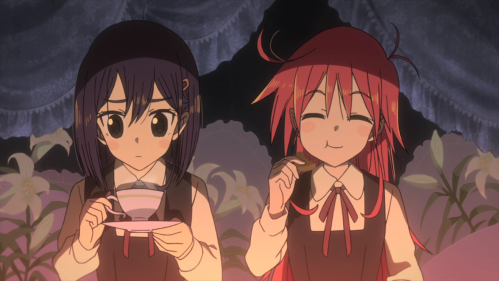 But Cocona does decide to break out—the subtext there being that she does want more from her relationship with Papika than the stasis of this dreamworld (which is tangled up with meta-critique of the yuri genre, but you can read all about that in my other post), and that she acknowledges that change is good even if she’s frightened of it. It’s a hard and spooky battle to break out of the otherworld, but Cocona does it. It’s understated and wrapped up in the madcap magical antics of the whole episode, but it’s one of the first big character development moments for Cocona: she’s faced with a sort of ideal world that protects her from her insecurities about change rather than pushing her forward, and she realises that it’s no way to live. She must gather her courage and grow, and break out of this false, frozen apparition of girlhood.

So, youth as a physical place that our heroes must escape from in order to grow. You can see the same motif in Revolutionary Girl Utena, both the series and to a more pointed extent in the movie, Adolescence of Utena. The academy that the characters attend is a false world, an illusion constructed by the villainous Akio—to the point where you can reasonably theorise that maybe Akio, Anthy, and Utena are the only “real” people in there, but let’s save the deep dive into those possibilities for another post. The most important thing is that Utena disappears from this world at the end of the series, the implication being that in rejecting the system it was built on, she could simply no longer exist within it, and so it spat her out. Anthy then willingly steps outside the boundaries of the school to try and find her, and so the series ends with the two girls freed from the stagnant and harmful confines of Akio’s dreamworld.

This idea of Ohtori Academy as a false world that the characters must escape from to grow is served up in concentrated form in Adolescence of Utena. Adolescence is a tricky beastie, since it remains ambiguous whether it’s a sequel, a reboot, an alternate timeline, or something in between. I, personally, like the idea that the new, surreal version of Ohtori that Utena wanders into is where she went after she disappeared at the end of the main series, and where Anthy in turn has tracked her to. It’s a muddle of memories and magic and metaphors, even more so than the original Ohtori we saw in the series (and that’s saying something) but the two girls come to the same conclusion at the end: it’s somewhere they need to get out of if they want a better life.

This is where that infamous scene where Utena turns into a car comes in. And yes, it does make sense in context—I choose to believe that Utena voluntarily makes the transformation, having embraced the fact that the world she’s in isn’t real, in a sort of Inception-esque “dream a little bigger, darling” moment. More importantly, though, is what the car symbolises, or rather, the theme it gives physical form to. At the end of the series, Utena helped give Anthy the strength to leave Ohtori of her own volition. What appeared as Anthy simply stepping over the threshold of the academy in the final episode, appears in the movie as Anthy driving beyond the academy in the car Utena turns into. Utena is the vessel in which she escapes, but she can’t go anywhere unless Anthy puts the key in the ignition. It’s a two-person process, this terrifying journey out of the nasty—but familiar, and safe, in a “better the Devil you know” kind of way—confines of Akio’s world.

Both Adolescence of Utena and the Yuri Hell episode of Flip Flappers ride on this theme of gaining self-awareness, seeing beyond the edges of your current worldview, and making the decision to escape… something that the chaperones of the world itself are not happy with. This would be a super neat motif on its own, but the fact that both these escape stories are about young queer women makes it even more poignant. Cocona and Utena are girls growing up surrounded by societal norms, those of princes and princesses, of intimate female relationships never expected to last beyond youth, and other heteronormative narratives… and they realise that these narratives don’t apply to them, that they are “false” from their perspective.

Hence, the world they’re currently living in is a false one, and one that reveals itself as malevolent when they try to tweak its rules. They realise there is another world out there apart from the one they’ve always known, one that might offer more hope and freedom… but breaking out and trying to find it means leaving the comforting familiarity of their childhood behind. Again, better the Devil you know, especially in Anthy’s case, where her horrid abusive relationship with her brother is all she’s ever had to call home. It’s a tough decision to make, whether it involves fantastical car chases or not.

The Great Escape is something neither hero can do alone—Utena helps Anthy find the strength within herself to leave her toxic situation behind (and turns into the vehicle in which she makes the physical escape), and it’s only when Cocona, Papika and a third (queer-coded, in my reading) girl team up that they can all break out of Yuri Hell. At the climax of the series Cocona and Papika get a romantic resolution complete with a dramatic confession of love, and Anthy and Utena share a big ol’ smooch as they leave Ohtori behind. They have grown up and changed and thus found the power within themselves (and each other) to break free of the cage of childhood, and they’ve also broken free of the confines of the false narrative it contained, and have escaped into a world where they’re free to express their love and be themselves. It’s a double whammy of symbolic growth and change.

And it emphasises that growing up, leaving behind the ideas and securities of childhood, is as scary as it is necessary. But these magical, symbolic adventure stories prove it can be done, and that there is a better world out there once you start travelling on your own choices. The transition isn’t always as dramatic or neat as a moment of smashing a clock or turning into a car, but it’s one that we all make one way or another, and stories as always give us framing devices with which to understand it and empower one another.

5 responses to “Coming Out of Your (World’s) Shell: Growing Up and Breaking Free with Cocona and Utena”