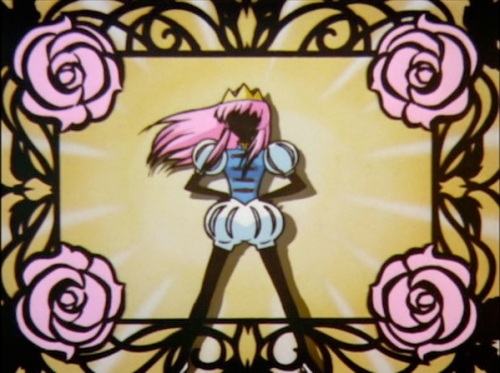 Everyone has a “brand” in their fiction, and the longer I think about it the more my brands seems to be “magical and metaphor-heavy queer girls’ coming-of-age stories” and “anything that messes with genre in a meaningful and interesting way”. Fortunately for me, this seems to be Kunihiko Ikuhara’s brand as well, as seen most obviously in Revolutionary Girl Utena and his more recent work Yurikuma Arashi. Both stories begin framed very obviously within a certain genre, only to have those familiar genre framings interrupted… and then the story itself becomes about dismantling that genre and pointing out how restrictive it can be.

Spoilers for the end of both series (including Adolescence of Utena) ahead!

Utena opens with that now-famous storybook scene: bright colours, Princes and Princesses, and a soothing narrator speaking directly to us with a “once upon a time”. It follows the children’s fairy tale formula to a T, and so with all these visual and narrative cues in hand, the audience forms a certain set of expectations. Okay, so this is a fairy tale. We can begin to safely make assumptions—whether we consciously realise we’re making them or not—about the path this story is going to take based on the way this type of story usually goes. But then the fairy tale intro dives off into unfamiliar territory, declaring that “the Princess was so impressed that she decided to become a Prince herself”. Hold on, now! That isn’t the way that usually goes!

And so Revolutionary Girl Utena sets the stage for its bigger story amidst the shards of our shattered expectations: this is going to be a fairy tale that doesn’t go the way they usually go, with a healthy dose of gender-binary-blurring along the way. Similarly, Yurikuma Arashi opens with a scene that’s heavily coded with imagery and frameworks to plant it in the yuri—and its older incarnation, Class S—genre. An elegant all-girls’ school, a sweet sunny day, a moving but chaste confession of love between two female students. Who are holding hands and gazing into each other’s eyes while standing in front of a garden of lilies, as an extra visual clue: lilies being the flower that the yuri genre is named after, associated strongly with romantic (but “pure”) love between women. Okay, so this is a schoolyard Class S story about an emotionally intimate relationship between two girls, which will clearly wait oh my God what’s with the bears?? 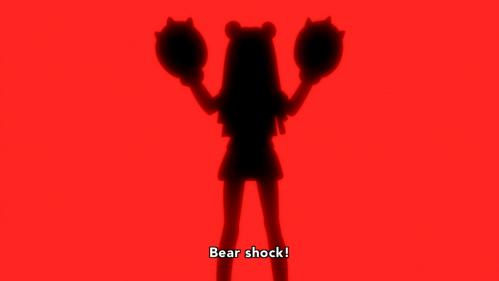 It’s an awful lot to deal with, but bear with me

Like Utena, Yurikuma saturates its opening scene with codes and conventions that place it firmly in a certain genre, then diverts in an entirely different direction—or at least, throws in something highly unusual—just as the audience is settling into their expectations. A framework we recognise is set in place, but, knowing that we know this framework from previous experience with it, the stories themselves duck and weave within it to create something new that ultimately critiques it—“it” here being the conventions of fairy tales and Class S stories, respectively. To borrow Susan Sellers’ terminology again, the familiar genre trappings “operate as compass points around which we can weave new and different stories” in which we can switch up and play with these familiar aspects once we have drawn attention to them. Ikuhara uses these “compass points” of familiarity very deliberately in both series, challenging these recognisable narratives and the audience assumptions that come with them.

Utena, introduced as a fairy tale, meticulously takes apart the usual fairy tale structure and points out the problems with it. Specifically, how this narrative forces people into restrictive roles. It uses the “a girl who cannot become a Princess is doomed to become a Witch” mantra to highlight the double standards women are trapped in, with no room for ambiguity. It presents a girl who seeks to be a fairy tale Prince to shake up the gendered conceptions of what exactly is “Princely”, and, not satisfied with simply critiquing the gender roles embedded in a statement like “a girl can never be a Prince”, rips the very fabric of the Prince archetype apart to reveal it as a false and damaging ideal couched in patriarchal concepts of masculine perfection that hurt boys as much as they hurt girls. The conventions of the fairy tale are turned upside down and then broken, symbolised quite nicely by the upended Disney Princess castle that hangs ominously above the duelling arena, only to turn out to have been an illusion the entire time.

The ultimate message of Utena is that this narrative and the assumptions that come with do active and implicit harm to the people caught up in it. If the system—let’s say Akio’s illusion world, but let’s also say the fairy tale narrative structure—finds an outlier that does not fit into it, they will either be crushed into conformity or will have no choice but to vanish from it. For example, the Prince and Princess essentialism of the fairy tale world has no place for queer or gender-non-conforming kids. There is no such thing as a lesbian in a fairy tale, so she will be smushed into a heterosexual partnership or simply not exist in the story in the first place, erased from the narrative. 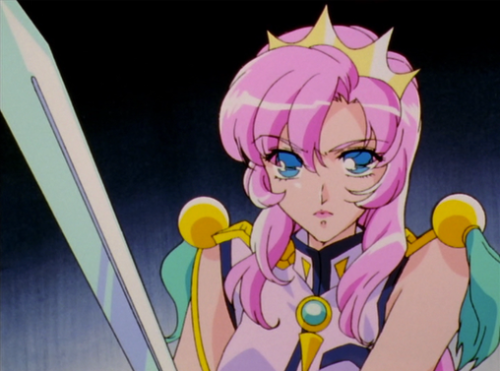 “While you were existing within a heteronormative narrative framework, I studied the blade”

Akio tries to trap Utena in a dress and the role of Princess, but she’s not having it, and in rejecting his world and the fairy tale ideals that it’s built on, she literally disappears. You get the extra fun version of this at the end of Adolescence of Utena where she and Anthy escape the confines of the system—the narrative—in that great car chase scene, in order to find a new world and make their own story without the conventions of genre trying to box them into certain roles.

Yurikuma Arashi’s is a restrictive world as well, drawing on and riffing on the Class S conventions that it introduced the series with. There’s much focus on conformity and “invisibility”, this being the safe bet. When Sumika, the protagonist’s “special friend”, is attacked by a bear, her classmates gossip and lament that “if only she had made herself invisible, she wouldn’t have been eaten!” Kureha’s classmates single her out to be excluded and ostracised in a bizarre technological ritual, where they unanimously decide that Kureha is “evil” because she “doesn’t follow social cues” and conform to “the mood of the herd”. It’s never explicitly stated that Kureha’s evil nonconformity, or the reason Sumika was not “invisible”, is that they were in a gay relationship, but it sure doesn’t take much to read it that way.

Much in the way Flip Flappers’ “Yuri Hell” episode presented the genre tropes of Class S as stifling and horrific, Yurikuma presents them as an oppressive and nasty framework that preys on those who don’t fit a social ideal (both humans who refuse to be “invisible” and bears, though there’s enough going on with the bears to fill its own post, so let’s focus on Kureha and Sumika for now). In taking their love in an openly and explicitly romantic direction, Kureha and Sumika betrayed the usual conventions of Class S, wherein their “romantic friendship” must always be chaste, pure, emotional, and never with the intention of pursuing it seriously into later life. Statements like Kureha and Sumika’s “I’ll never back down on love” imply a long-term romantic commitment between the girls that contradicts the usual idea that these were “training wheel” relationships meant to end on graduation day, leaving the girls ready to marry men as society expects. Having stepped off the usual path the genre sets out, the narrative no longer has a place for them—and so a representation of the system/structure attacks, trying to force them back into a box, and failing that, kick them out. 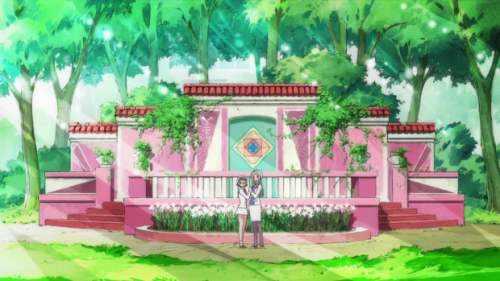 Put your hands where I can see them and step AWAY from the symbol of love between women!

As in Utena, in the end Yurikuma’s protagonist undergoes a magical transformation and disappears from the confined and restrictive world. The system ticks on without her, but the ending demonstrates that she’s transcended the world’s boundaries and expectations and now exists in an abstract space where she is not constricted by the usual narrative’s rules or roles, and is free to be herself. And she makes this transcendent leap while sharing a big romantic smooch with another girl, just to really hammer home her defiance of the Class S world that’s trying to destroy her (it’s just not an Ikuhara ending if two girls aren’t escaping from a cruel system while kissing and stylistically nude, is it?). Once they have vanished from the Class S framework, Kureha can pursue a true and fully-fledged romance with another girl, with no domineering moral guardians or restrictive tropes to make them act a certain way.

The boxes, walls, and exclusion ceremonies of Yurikuma echo the coffins of Utena, each representing restrictive roles that the characters are forced into by their surroundings, and each played as an antagonistic or harmful force that said characters must escape from in order to be true to themselves, whether this escape means turning into a car or a bear. Ikuhara uses the familiar structure of genre—both fairy tale and Class S—to set up and then defy expectation, but also to question these expectations and if they’re really all that great to begin with. Sometimes the girl wants to be the Prince, sometimes the young lovers do want to do more than hold hands. You could say that genre itself is the antagonist in both these series, which is a fascinating way to go about meta critique, and a fantastic way to draw attention to the power of fiction.

5 responses to “Fairy Tales and Flowerbeds: Messing with Genre in Revolutionary Girl Utena and Yurikuma Arashi”