Once More, With Feeling: Teens and Time Loops in Revue Starlight 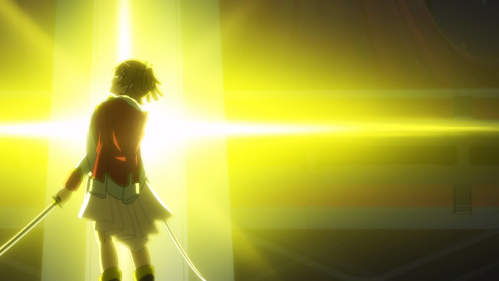 Never trust anyone who says high school is “the best years of your life”.

That said, of course, it can feel that way at the time, especially in comparison to the looming threat of adulthood and all the scary responsibilities and realities it contains. While I knew even back then that year ten was not the peak of my existence, the passage of time and its implications of change struck me with deep apprehension. After a rocky beginning to my teen years, I’d finally settled in with a group of good friends, and the thought that we might have to separate due to something as mundane as graduating was terrifying and wrought with injustice. Things were good. I didn’t want to lose anyone, didn’t want anything to change, wanted to hang onto that little slice of fun carefree (ish) existence.

Would I have trapped us all in a time loop to preserve the ties of our friendship group and avoid the pressures of adulthood? A magical cryptic theatre giraffe never asked me, so I suppose we’ll never know. But a little part of me would, you know, see where you were coming from if you decided to do that.

Spoilers ahead for Revue Starlight episodes seven, eight, and nine! 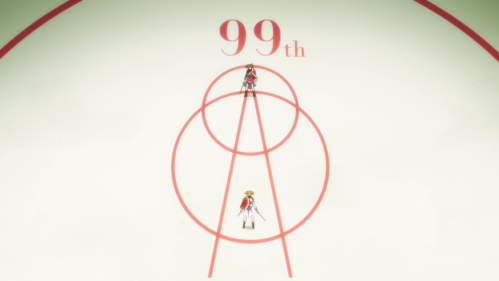 Revue Starlight’s middle arc gives us two important revelations that change our understanding of its magical, theatrical world. First and foremost, there is the reveal that the sweet and friendly comic relief character Nana—“Banana” to her friends—has secretly locked the entire school in a magical time loop. She’s been through the “audition” process (i.e. the duels in the enchanted underground theatre) before, and come out in top position. Having proven herself The Best, Nana was offered a wish, to perform on any stage she pleased. Nana chose the previous year’s class performance as her stage, and so time slid backwards for her to do exactly that. Nana then relived the wonder of that stage show and the leadup to it once again… and again, and again, and again, so many times I don’t think even she is keeping count anymore.

The second big reveal comes from the experience of Hikari, who has also (though in a different way to Nana) been through these duel-auditions before. Back in London, where she was training at a prestigious theatre school, Hikari and her classmates were drawn into the same swordfighting system that the Seisho Music School girls are embroiled in in the current timeline of the series. Hikari got to the end of the process and didn’t come out in top position. Not only did she not get a wish granted, but she found her “shine”—her motivation, her passion, and perhaps even her actual talent—drained away.

Whether this is literal and part of the magic system (all the losers’ talent siphoned away and given to the winner to power that big ol’ wish) or just the emotional result of crushing defeat, is not entirely clear; but the two feed naturally into one another. That’s the reality of the theatre, after all, especially theatre drawing from the Takarazuka Revue tradition: there can only be one Top Star, only one “winner” in this game of fame. These girls pour their heart and soul and all their energy into practicing and auditioning for these parts, and if they don’t succeed, they feel crushed and faced with wasted effort and feelings of worthlessness. It makes you wonder… with this ruthless industry behind it, is the glamour and fun of performing on stage even really worth it?

And so Nana makes what seems to be the perfect compromise: she’ll let her friends endlessly relive the exhilarating experience that is their first major stage performance, but reset the time loop just in time to protect them from the devastating reality of the end of the duel-auditions. They’ll hover forever in that blissful period. Everything will be fine!

It seems a bit maniacal as a plan, to the point where I was convinced for a while that Nana was going to be the series’ final antagonist. But Nana comes out more sympathetic than anything else. Learning about her unhappy middle school days, you can understand why she got so attached to her new, genuine friends, and why she leapt into the role of “everyone’s Banana”, defining her worth by her ability to help people. Learning that two of her classmates dropped out, unable to handle the pressure of the academy, you can understand Nana’s fears that her new community and support network would disintegrate if things got tougher than the happy days of that first year. Learning about the heartbreak and “shine” drainage that awaits at the end of the duel-auditions, you can understand what Nana wants to protect everyone from.

Hikari enters the Seisho Academy duels and adds a new element to Nana’s closed system, as does Karen when she jumps into the fray uninvited. Suddenly, Nana’s “repeat performances” are spiralling out of her control and becoming something new. She fights both Hikari and Karen in equally spectacular duels, and loses to both of them. But, ultimately, this arc is not resolved by the villainous Nana being defeated, but by the sympathetic, lost Nana being comforted by her friends.

Her roommate Junna is the one who ultimately pulls her out of the endless loop, not with a grand climactic battle but with conversations, and the simple but life-changing assurance that she’ll still be by Nana’s side even if things change. Things have to change, people have to grow. This is true for Nana as much as it’s true for the upcoming class performance, which is being altered and perfected in the background of this arc. They can’t just do what they did last year, even if that was great. The script should be redrafted and improved on, the costumes adjusted, the choreography tweaked, the lighting re-designed, all in the service of trying something new and making something better.

But what if it’s not better? Well, that’s a risk you have to take. Nana was stagnating and slowly losing it, stuck in her endless loop that had gone on for so long it had lost its original meaning. She does it to protect her friends, but at every reset they go back to being strangers and the bond she treasures is lost. She does it to preserve the performance of Starlight that she loved so much, but she’s come to loathe the show itself and its tragic story. She was so terrified of her friends facing an uncertain future that she locked them all in stasis, where no one can achieve personal growth, least of all Nana herself. Hey, maybe high school isn’t the best years of your life. I imagine spending the equivalent of decades redoing tenth grade is the most effective way to find that out.

Time loops, and time travel of any kind, are best when they revolve around personal conflicts. Revue Starlight’s time loop is used to inform the audience about the magical rules of the world, sure, but first and foremost it’s there to develop Nana. Introduced as the goofy “Banana”, she became the character in the series I was most fascinated by and, in that weird little way I mentioned at the start, the character I most related to. The concept of growing up and growing apart, of seeing your precious friends struggle, can get you in a vice-grip of existential terror, especially as a teenager in Nana’s position, where so much of your own identity is couched in being a valued part of a group. 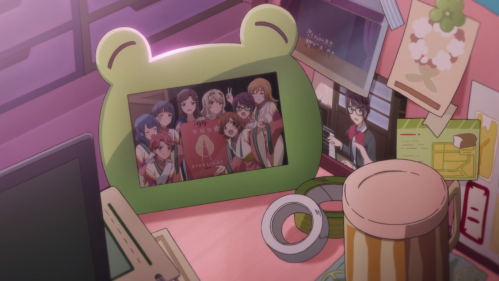 But instead of preserving that time of life in a Peter Pan loop, we ought to stick together through the change instead, doing our best to work towards a good future instead of trying to create or preserve a “perfect” version of the past (hey, doesn’t that sound familiar? Goodness me, I have a brand). Nana got into this mess powered by her love for her friends, and fittingly enough it’s The Power of Friendship that manages to pull her out of it.

Nana’s decision to step back, accept her loss in the duel-auditions, and not reset the time loop, hits especially hard given that the audience now understands exactly what’s at stake if the auditions are allowed to come to a close without her taking the crown. Suddenly, the future is uncertain. And there’s nothing scarier than that. But that’s life, especially at that wonderfully and horribly liminal age. Using the framing device of time magic, Revue Starlight captures the uncertainty of adolescence and the messy emotional responses there can be to it with unexpectedly heartbreaking (and heartwarming) clarity.

I was so worried about losing the friend group I’d built up in high school. I wonder how my younger self would react if she knew that I am, in fact, still friends with some of those lovely people I met back then? A hell of a lot has changed, but we stuck together, and I think we’d all agree that none of us peaked in year ten and we’re so so glad that time moved forward, even if it yielded some unexpected and sometimes scary stuff. Everything more or less turned out alright, no wish-granting giraffe or swordfights required. Hopefully in many years Nana will be able to look back and say the same.

4 responses to “Once More, With Feeling: Teens and Time Loops in Revue Starlight”