Let’s talk about a cute little show about scuba diving, and what it gets right about the benign terrors of high school.

Adolescence is, for many people, defined by a lack of self-esteem and a haphazard quest to find your place in the world. This is something Amanchu! portrays with loving care, telling the story of two nervous teenaged girls finding confidence and community in their shared hobby with both heartwarming gentleness and heartbreaking realism. The different ways their insecurity manifests, the underlying stress they face about finding purpose and a sense of identity, and how they help each other grow more confident, felt at times painfully true to my own teenaged experience, as I’m sure it did to many other viewers. Amanchu!’s slice-of-life school club setting means this is not a coming-of-age story with high stakes or high drama: it instead gives weight and importance to these girls’ down-to-earth struggle, creating a quiet and poignant story about friendship, love, and finding your feet in the weird world of high school.

Amanchu! begins when protagonist Futaba moves to a new town by the sea, racked by nervousness about starting a new life away from her friends. Futaba clings to her mobile phone like a lifeline, instinctively checking for new messages and flipping through photos of her middle school friends as if to remind herself that they still exist and she is not alone. She’s withdrawn and uncertain when she crosses the threshold of her new high school, seeming afraid to move too suddenly or take up too much space.

In high contrast to Futaba is her classmate and fellow protagonist Hikari, who is an ever-bubbling pot of energy and optimism. Hikari takes Futaba under her wing, giving her a cute but nonsensical nickname and showing her around town with the enthusiasm of a tour guide. Most importantly, Hikari introduces Futaba to her hobby of scuba diving, complete with a reckless and cinematic scene of the two girls breaking into the school’s pool. Futaba is unsure at first, but, inspired by Hikari’s passion for the sport and spurred on by her encouragement, takes the plunge (literally, into the pool) and tries something new.

The way Hikari gleefully drags the introverted Futaba around for the first couple of episodes makes her seem, if you’ll forgive the use of an outdated and done-to-death term, something like a Manic Pixie Dream Girl, the blinding light that will haul the dreary protagonist out of her slump and towards character development. But Hikari is not the overflowing cauldron of confidence Futaba (and the audience, at this point) believes her to be. She later confesses to Futaba that her zany behaviour is the way she manages her shyness—where Futaba retreats inwards when she feels out of her depth, Hikari launches outwards.

With this confession, Hikari’s cartoonish frog-eyed smile starts to look more like the “this is fine” dog’s stressed-out grin than a genuinely jokey expression. And it’s an important reveal, not just because it’s a bit of heartfelt dialogue that brings Hikari and Futaba closer together. When we picture a lack of confidence, it’s usually Futaba’s introversion that comes to mind, but Amanchu! takes the time to show that there isn’t one singular vision of what self-esteem issues look like, and to show both of its female leads helping each other with said issues. Futaba comes out of her shell with Hikari’s love and support, and Hikari feels validated by Futaba’s genuine belief in her and eagerness to share her passions.

I’ve been both of these girls at one point or another. The portrayal of Futaba’s lack of confidence sent me reeling back to my own teenaged days, sometimes with startling specificity; from stress about getting water in my goggles during swimming lessons to the way I based my identity around wanting other people to be happy. Negative feedback made (and who am I kidding, still makes) me shrivel up as much as it does Futaba, all the more so if people who are much better at the thing I tried are sitting in plain sight. And I also, like many people, use my phone as something of a security blanket—if you’re standing alone in a crowded room, but you’re checking Twitter, you can provide the illusion that you’re a confident and connected social creature, to observers and to yourself.

But channelling my lack of confidence into extroversion was also something I tried when I was younger, with results just as mixed and mortifying as Hikari’s. I was in a drama class for a few years in my early teens (believe it or not), craving praise and positive feedback and using performance to express myself in ways I felt I couldn’t in lunch-break social situations, where I tended to clam up. Unless of course I was play-acting there, too, trying to match the sense of humour and topics of interest of my peers. I was torn day-to-day between Futaba’s desire to disappear and Hikari’s longing for attention and acceptance, falling flat on my face somewhere in the middle and not entirely sure which was the real me.

It was a process of trying on different masks, searching for one that both fit me and helped me fit in. Some of the time that involved being the out-there funny girl, so the more I reflected on Amanchu! the more Hikari’s eccentric “woop woop!” catchphrase started to sound embarrassingly familiar to some of the memes and nonsense in-jokes I repeated in high school (this was circa 2008; being “random” was very in. But you had to strike just the right kind of goofy humour, otherwise you’d just get cringed at. It was a tough gig). 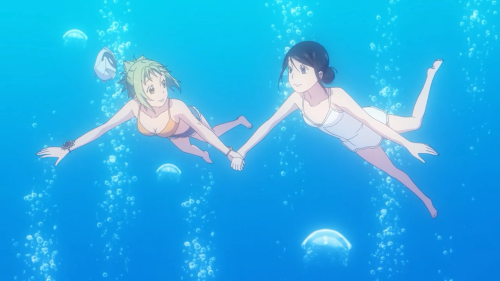 I started to drop the social character-acting and figure myself out when I found a group of friends I really connected with. This friendship mostly sprang up, and was nurtured by, a shared hobby—anime and other similarly nerdy media, I’m sure you’re surprised to hear. Like Futaba was drawn to Hikari’s passion for diving, I found myself enthralled by these artistic and out-there stories that my new friends loved so much, and the way that love seemed to so clearly define them and give them purpose.

Like Futaba and Hikari, I found myself settling much more comfortably into mutual friendship once we had this hobby in common. Of course, they still knew much more about it than me—the genres, the fan culture, the secret and sacred ways to access it that didn’t involve watching it in three parts on YouTube—so also like Futaba I got a case of stars in my eyes, wanting to get on the same level, wanting to become part of this little subculture. Wanting these people to accept me and think I was cool, something that had never quite worked with the other friend groups I’d wafted in and out of.

But, like Futaba, I discovered that with true friends there was no strict criteria I had to meet, and they accepted me as I was. We were not a confident bunch, individually, but together we formed a comfort zone where we could have fun and grow positively. Our shared interest was the glue that brought us together, but it soon become just one aspect of deep and wonderful relationships. And so we stuck together through our various personal journeys, whether that meant offering a shoulder to cry on, a trusted companion to come out to, a bevy of in-jokes to fire back and forth, or simply some episodes to watch together, sharing that emotional investment whether it was drama or comedy. I’m still fast friends with most of this group some ten years after meeting them. 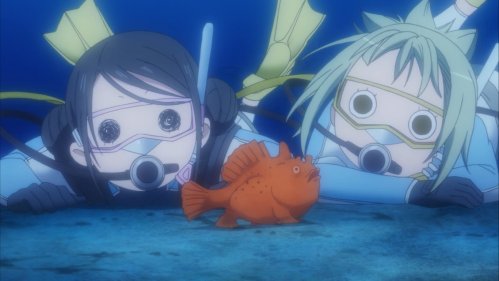 Futaba, too, starts to find her feet once she finds something she’s truly passionate about, and someone to be passionate about it with. She frets, along the way, that her love of diving isn’t really hers since she just picked it up from Hikari, but their club advisor encourages her not to think this way. So what if she found her joy through someone else? She’s making it her own through her own enjoyment of it. When you’re figuring your identity out in your teen years, you have to be a bit of a magpie, borrowing and trying out aspects from different people you admire and subcultures you’re interested in, until the best bits boil together and someone recognisable as “you” comes out. It’s not something that will happen overnight, which is what makes your teenage years such a frustrating time.

But you can get through: Futaba joins the diving club following Hikari’s lead and mesmerised by her dedication to it, but by the end of the series—and continuing forward into the sequel Amanchu! Advance—she has found her own passion and her own place in the hobby. By the season finale, she’s beginning to feel truly at home and truly confident in her own abilities, something that was unthinkable for her when she arrived in town at the start of the series. I couldn’t help but be proud of her, in part of course because I could see my younger self mirrored in her so much.

Amanchu! came to me highly recommended by a lot of people, I think because it has such a resonant character arc at the heart of its gentle school club plot. It is fundamentally a kind story, and I felt that, through its main characters, it not only held a mirror up to me but said “listen, it’s going to be okay.” The comfort Futaba and Hikari find offers comfort to the viewer, too, with just a touch more poignancy than the usual slice-of-life warm and fuzzies–growing up is hard, but if they can do it, so can you. It’s a message that still tugged at my heartstrings even when I am, in theory, already “grown up”, which speaks to the power and authenticity at the heart of this cute little series.

5 responses to “Adolescence, Anxiety, and Amanchu!”