The Disservice of Fan Service

Sherlock Holmes is not impressed by this display of male gazery

Do you ever watch something and just think: “That was written just for the fans”?

Scenes that seem as though they were designed to be awesome more than anything else. Dialogue that seems made to be quoted. Moments of tension or comedy that are manufactured to titillate the audience. Sometimes fans of a show or book pick up on these things on their own and take them into their hearts, but sometimes it distinctly feels as though the creators put things in there just to appeal to their audience.

The most obvious of this is the root of the words “fan service”, defined as a random and mostly irrelevant action that plays directly to the audience’s (and chiefly the straight male audience’s) interests: a sudden gust of wind blows a skirt up! An event happens within the show that calls the female cast to dress in scanty or adorably provocative outfits! A sudden rainstorm thunders into existence just above the main characters’ location and everyone happens to be wearing white shirts!

Not to say that this exists solely for the male gaze; depending on the target audience, these instances will occur to males and females both. An important conversation just happens to take place while a toned male lead is working out! There is a bathhouse scene for little reason other than comedy and implicated nakedness! Characters wear second-skin spandex battle suits that may not be historically accurate!

Or, because writers do acknowledge that flashes of attractive people is not the only thing that humans get excited by, they could throw in some really cool mechas and fight scenes and explosions. 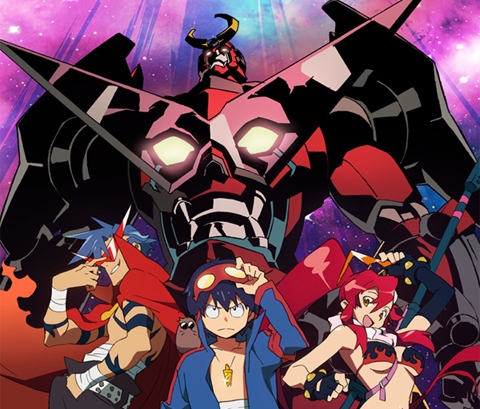 Or, if you’re Gurren Lagann, all of the above

Now, fan service can be a little bit of harmless fun, or it can greatly get in the way of proceedings and make viewers uncomfortable. For example, when Littlefinger decided to recount his life story and hint at his motivations in Game of Thrones, did he really need to do it while addressing two of his female brothel workers as they practiced pleasuring customers on each other? Apparently he did.

Because hey, there’s nothing to get the viewer’s attention like a couple of hot gay people, whether purely in aesthetic like that particular scene or in ship teasing, dropping and dancing around the hint that two characters of the same sex might get together. This can be harmless fun, again, and plenty of series seem to be jumping on the bandwagon (Western ones, in any case… in anime, lord knows it’s nothing new, ask anybody), but this purposeful titillating of the fans can lead into a whole other issue.

As this writer points out, the endless teasing of the possibility of a gay relationship is reducing an entire sexuality to something trivial, a writing device to toy with fans and induce entertainment. I’m not sure I’d ever heard the word “queerbaiting” before, but this is what the Intertubes are good for.

Because this, I realise, is what a lot of fan service is: baiting the audience, dangling yummy, juicy entertainment in front of them hoping the snag them on a hook. A lot of series try this in their beginning stages to try and get people interested—I’ll use the example of the manga series Chobits, whose opening few chapters are filled with nudity and sexual references while building up to a sweet and intriguing plot about humanity’s relationship with sentient Artificial Intelligence.

This pattern is repeated throughout many other series, and melts over into promotional art and trailers and everything in between. It’s basically an in-story version of shouting “Sex!!!! Ah, now that I have your attention…”

Now, it’s a little bit insulting that some creators/marketing people assume that to broaden or create an audience for their work they have to appeal to the primal instincts. It’s also a little bit insulting that it works—I remember being asked if I too was going to go see Magic Mike, a movie about muscular, beautiful celebrities playing male strippers. I asked what it was about, and the questioner replied that they didn’t actually know except that it was full of hot guys in various stages of nakedness. I said that wasn’t enough criteria to get me to go see a movie (though interestingly enough, Magic Mike is a recent example of a work luring an audience with eye candy and then delivering a dark and emotional and apparently quite decent plot. Anything is possible!).

The other issue I take with fan service is when it’s forced down the audience’s throat—chiefly, when it feels like pleasing the fans has gotten in the way of writing a good plot. Sherlock, for all I admire about it, disappointed me a bit with the first episode of the second season because it was stuffed full of giggling nods to the fanbase. Why is Sherlock only wearing a sheet for two scenes? Why is Irene Adler accusing John playfully of being gay for said sheet-wearing detective, after stroking his face with a riding crop? Why did the great Irene Adler, only person to ever really outwit Sherlock Holmes, fall from her adventurous grace and have to be saved by him in the end? Because that was what they thought the fans would want. 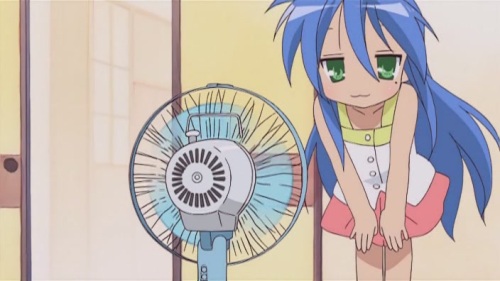 Much like the service of a real fan—can be cool, or can only blow hot air around and make us all uncomfortable

Granted, by definition, everything that is written is written for its audience, I mean, that’s the way these things work, but there’s a difference between knowing your target viewership and directly pandering to them with teasing jokes and silly scenes and moments of questionably-relevant awesomeness. A lot of A Scandal in Belgravia felt forced to me, like far too much effort had gone into stuffing as much fan-pleasing material into the episode, leading it to feel over-full and over-compensating for its weaker plot.

The exact same thing can happen, and does happen, with countless other shows and all the kinds of fan service. Can anyone work out the plot of Project K, or are they just watching it to see the cool super-powered street fights and the sexual tension between various pretty boys? Is the second season of Black Butler capable of redeeming itself in anyone’s minds after so many nonsensical, canon-altering and shamelessly wacky escapades concocted in an attempt to feed the fans left hungry at the end of a neatly wrapped up series?

It becomes an issue of balancing style with substance—if the creators, at whatever point, throw away the question of “What would be good for these characters and this story?” and direct their energy instead towards “What will the fans want to see?” , it shows and the work in question suffers. And that does not please anyone.

21 responses to “The Disservice of Fan Service”