I never intended to become this much of An Anime Blog. In fact, I have a strangely vivid memory of an anxious thought when I first started this blog, some five years ago: I should avoid writing about anime where possible, and should instead focus on other, more “acceptable” geeky properties like Doctor Who. I’m not sure what exactly brought this on, since I was barely keeping up with Doctor Who by 2012 anyway. It might have been a concern about pageviews, but I think it was mostly just a lingering high school anxiety that I ought to present myself as liking certain things so I could brand myself as… God, who knows? The “acceptable” type of geek, whatever the hell that is? Whose approval was I clamouring for?

Anyway, I wonder how the me of five years ago would react to learning I now get paid (however occasionally) to write about anime, and that I’m diving towards a career based around talking about things I find interesting. With that aforementioned high school anxiety still lingering, this year has been a weird trip of “what do you mean other people want my opinions and ideas?” both in my academic work and in my online writing. I’m doing my best to feel blessed rather than bewildered.

Some of you may be wondering how exactly you go about getting gigs writing for other websites (about anime or otherwise). Which case, I’m afraid I have the most boring and sensible Baby Boomer Dad answer for you: I knocked on the door and asked if they were hiring. Or, I found out about AniFem through someone else I followed, way back in November-ish last year, and sent them a message via their Contact Us page: hi, I see you’re a site all about anime and feminism. Whaddaya know, I am also interested in anime and feminism—sometimes both at once! I see you’re just starting out, so if you’re looking for contributors to fill up this shiny new web-space you occupy, I’d be happy to help. Here are some links to relevant posts so you see that I can a) write coherently, and b) write to your brand. Cheerio!

(At the time, I offered to do it for free because I supported what they were setting up. By the time my first piece went up, though, they’d gained enough Patreon pledges that I could get paid, so bonus!) 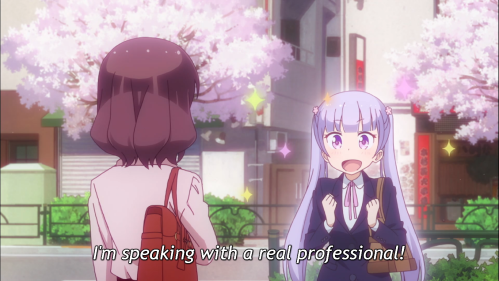 Lady Geek Girl was similar; I saw them boosting the link to their “careers” page on Facebook and, having not realised they had such a page before, went to check it out, and ended up sending them a similar message. It’s a paradox for all introverts, but no one will know about you unless you make yourself known—you have to get yourself out there rather than waiting for people to come to you. And to have a portfolio to show off, you have to write. Without all those thousands of words about Stuff I Find Interesting (written for myself, first, rather than that mysterious audience I was so frightened of fresh out of school) I wouldn’t have progressed, both in terms of talent and practice and in terms of career opportunity.

(That said, my two pieces for the now-defunct movie section of Popgates were because the site admin came to me… but as I said, following low stats and a haphazard editing process, that section no longer exists. The admin was very nice, but I’ve had much better experiences with pre-established websites that I sought out. I’m not saying this is an omen for everyone, but that has been my experience)

The this-and-that of all this is that I’ve been working hard this year to fight the knee-jerk assumption that my passions are frivolous, instead embracing them and the opportunities they can bring. I’m posting this roundup so early because I’ll be at a conference at the end of the month, in with a bunch of other researchers all deep in discussion about stories, writing them and reading them and picking them apart. Your passions are important. Your passions should bring you joy rather than embarrassment by instinct. Your passions should, where possible, lead you forward in life, whether that’s career-wise or hobby-wise or friendship-wise.

All this motivational corniness is to puff myself up and make it sound like I’m more emotionally prepared for this conference than I actually am. Not to say I don’t believe in it, but hey, you have to razzle-dazzle ’em. Wish me luck, and I hope you enjoy/ed the posts this month!

On the blog this month

When Michael Met Mina: Actually, Yes, Let’s Make It About Race (in which I review a book about inherited bigotry and the weird and awful bubbling cauldron that is race relations in Australia. At least we voted to legalise same-sex marriage…)

The Princess, the Witch, the Goddess, and the Rose Bride (looking at Utena through the lens of The Hero’s Journey again—this time at Anthy, who fulfils the role of The Goddess, and is having a super bad time there)

And the Summer Rewatch Project begins with Madoka Magica episodes one and two!

Escape From Yuri Hell: Flip Flappers’ Critique of the Class S Genre (in which, through research, I finally fully understand what episode 5 of Flip Flappers was going for, and appreciate it massively more because of it. I seem to have helped other people do the same, and for that I’m very happy)

The Persistence of Memory? Land of the Lustrous and Metaphysical Death – Land of the Lustrous is this season’s Made in Abyss, in that I can’t watch it, but I am keeping up with it via the flow of really good analysis of it. This post asks: if our bodies could never be destroyed, what would we fear instead of death? A loss of memory and death of the self?

“But There’s a Reason It’s There!” How to Meta Critique (Guest-Starring Land of the Lustrous) – see? There it is again. This time, it’s a prime example in a discussion of the age-old “but there’s a reason [problematic element/tired trope/troubling plot] is like that” rebuttal to any kind of critique or criticism. You don’t need to know Land of the Lustrous to have a great time reading the post, since it lays out the problems with this mindset in such a concise and clean way that I think I’m going to keep it bookmarked in case I ever run into that kind of conversation.

Stranger Things 2 Keeps Its “Strong Female Characters” Apart From One Another, Just Like Every Hollywood Genre Property – sci-fi is getting better (slowly) at including dynamic and complex women, sometimes even in starring roles… but it’s not letting these characters interact with each other. It’s an annoying issue that goes deeper than whether or not a show gets a tick for passing The Bechdel Test.

Index of Flip Flappers Reviews and Articles – there’s an absolute goldmine of Flip Flap meta on the internet, and this blog’s compiled a handy list of a bunch of them! Some personal recommendations:

Revolutionary Girl Utena: Reflections on the Protagonist — a trio of posts adapted from an academic paper about Utena’s multifaceted nature and how she challenges and engages with our typical ideas of what it means to be a “protagonist” and “hero”. Exactly my jam.

And to cap off, I want to link to this  webseries, Anime Crimes Division, which gives me the giggles.