Bambi’s Mother Died for Your Education 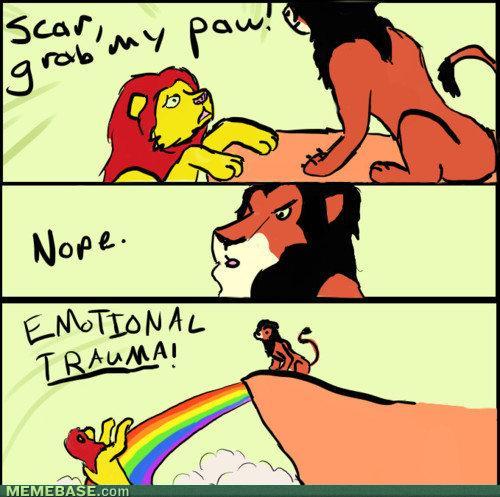 It’s an experience we’ve all had: sitting down to enjoy a few hours of G-rated fun with friends or family, and then bam — you find yourself staring at the screen with your mouth agape, and this cry seeps from your slackened jaw:

Take DreamWorks’ Shark Tale: the plot kicks off when a car wash employee is left to die by mafia hitmen when he loses the money he owes them on a horse race. He then witnesses the accidental death of the mafia boss’ son and claims fame for it, leading us into a story of greed, fame, violence, revenge, kidnapping, a tense and emotional love triangle, and the internal struggle of a shark who wants to be a vegetarian. (minus the last bits, that sounds like the freaking intro to Chicago!)

The mafia, and gambling. In a children’s film. Granted, the mafia are sharks and the hitmen are jellyfish (and the racehorse was a seahorse, badum tss) but the point remains.

And then of course, who in generation Y could forget having their hearts ripped out by Disney in arguably their greatest masterpiece, The Lion King? The hero’s father is murdered horribly in front of him by his scheming uncle who wants to take political power. Surely that’s a bit brutal for the G-rating?! 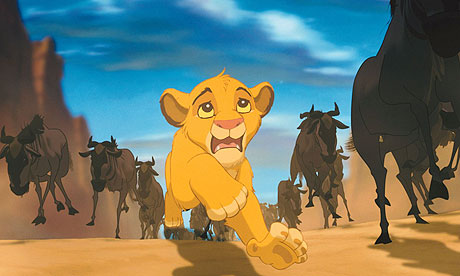 Well, perhaps that was the point. What does Simba do, after all? He grows, he learns from his experience and a wise old monkey, and comes back to restore peace to the kingdom, and finds happiness in the end. It’s teaching the viewers, at whatever impressionable age they are, that even when tragic things happen it is not the end of the world.

After all, how many Disney parents die or are absent as part of the plot? A damn lot. The main thing people remember about Bambi is that his mother gets shot. But does the deer little thing give up? No, he stays on and powers through life.

This extends into television as well — the critically acclaimed fantasy animation Avatar: The Last Airbender has the central theme of an ongoing and painful war. By the third season the main characters, all aged 12 to 16, are going headlong into battle hedged by the ever-present theme of death, honour, morality and destiny. Though nobody ever actively dies on screen, there are plenty of characters with one or both parents absent as casualties of war, the titular last Airbender is the last as the result of a genocide, and one side character even dies offscreen — a bloodless and perfectly clean demise, but still one that drives the message home with a shudder: you can’t save everyone.

Granted, this gets the PG rating for animated violence (which is better than non-animated violence, because when someone falls twenty feet from a flying bison they don’t have to break their spine, just look disgruntled and winded for a moment), but is still one of Nickleodeon’s most popular shows. It even has a spinoff/sequel series now, Legend of Korra, which is even darker: there are street gangs, corrupt governments, anarchists, a particularly horrifying power the antagonists have that involves turning people into their puppets by controlling the blood in their veins (!!!), and at the very end (spoiler alert) an explosive-induced murder-suicide. 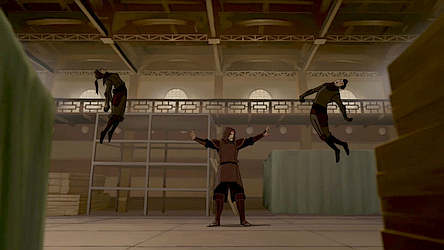 Bloodbending: Fun for the Whole Family

There it is again, that cry from the pits of the damned: HOW IS THIS A KID’S SHOW?!

The thing is, we shouldn’t be so terrified of exposing dark and serious themes like war, rivalry and death to children: they’re going to have to learn about them someday, and it might as well be presented to them first in the medium of an entertaining movie, book, or show.

Let’s say an avid Lion King viewer loses a family member — an adult can then sit with them and say “Do you remember when Mufasa died? And how Simba was so sad? Well, you’re just like Simba, and just like Simba, you’re going to be okay.” That’s a very loose example, but that’s the basic idea. Better children have some understanding of the concept of death when they are faced with it, and come prepared with the knowledge that they’re going to be alright. And if children have already suffered through something like that, they will find comfort in relating to that character.

We all cried like soap opera actresses when we read Bridge to Terabithia but it was an important book in that showed us death through the eyes of a kid like us. It acknowledges the painful path that the main character goes down in his grief but shows him coming out the other side with the knowledge that life will go on and his friend will always be in his memories. This is a crucial thing for human beings to understand as everyone will go through it at some stage. Why do you think there are so many books where the dog dies?

The same goes for sex — though no one’s going to dare to get anything obvious and explicit into something aimed at kids, there are little hints to prepare them. Something I noticed about both The Last Airbender and Legend of Korra is that they both feature a pregnant character who gives birth at some point. No storks in this world, and funnily enough it’s the same for the one we live in. The magic of the birds and the bees is added in as a side element to expose it harmlessly to kids and enforce that it’s just a part of life (and at some point, when your kids ask where babies come from, it’s going to be marginally less awkward to explain using CGI mammoths as reference).

People say we should have a same-sex Disney couple for this reason, to expose the young audience to the very real and not-going-away concept of homosexuality, and present it a way that proves it’s just part of the world and nothing to be feared. We have yet to see on that matter, of course.

Fiction is a reflection of reality, and exists to make it easier to understand. It’s especially important that we use it as a tool to educate and prepare the next generation.

I mean, I grew up watching Mufasa be dropped into the stampede, and I turned out okay. 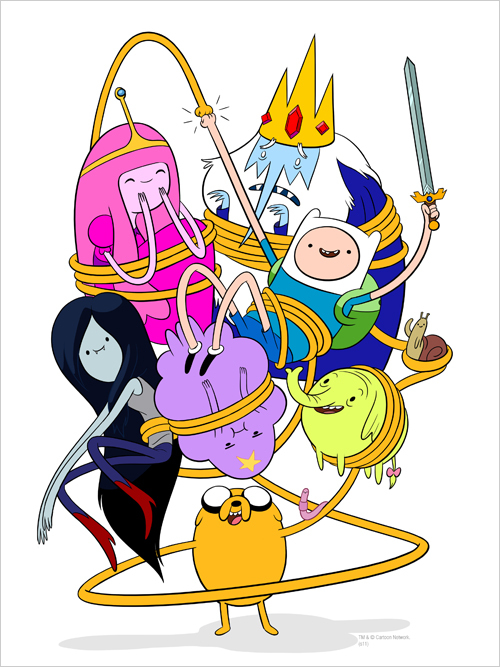 And then there’s Adventure Time: Introducing your kids to surrealism since 2010

2 responses to “Bambi’s Mother Died for Your Education”