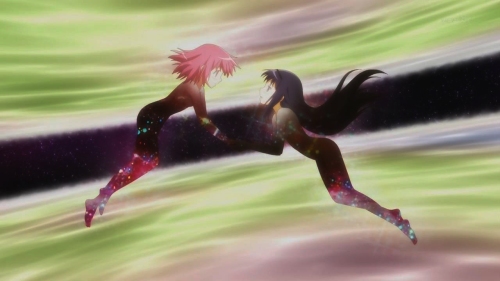 I’m really bad at reading subtext, okay. If two characters have got the gay for each other, you have to tell me outright, otherwise I’m going to fall into the complacent mistiness of believing they really are Just Friends. I have no problem believing, for example, that someone would damn themselves to an eternity fighting in a time loop to save someone’s life out of platonic love. Friendship is magic, alright, and we need more narratives that show the power of non-romantic relationships. That being said, we also need more queer representation, and the two can often get tangled up in a weird sort of meta limbo.

On the one hand, I’d love to see a canon queer relationship on TV, on the other, I’d love to not have any fictional relationship in my face without proper build-up—it’s the old conundrum: people adore love stories but aren’t comfortable with couples, and thus writing them goes in all sorts of strange and dramatic directions. It’s better, then, to draw out the possibility of a romance for as long as possible, making the audience believe in the pairing and support it, so that when they do get their happily ever after it’s much more satisfying. There’s an art to teasing something like that out, but, unfortunately, it runs into and can cross over with a nasty little practice called queerbaiting, dangling the possibility of a non-traditional-heterosexual-straight-as-white-bread romance in front of the audience without there ever being a chance of it actually happening.

Sometimes, it’s difficult to tell where one begins and the other ends. There’s also an important distinction to make between authorial intent and audience interpretation—the audience is quite within their rights to take the relationship between two friends (or enemies, for that matter) and interpret it as something romantic or sexual, and do with it what they will in their own hearts, minds and internet dealings. That’s what fandom is about; taking the source material and playing with it like putty, stretching and squishing it to explore it from every angle, especially ones the writer didn’t or wouldn’t themselves. However, there’s a gulf between the audience reading into things their way and the writers deliberately putting something there to be read. Which they do not always do with the best intentions. END_OF_DOCUMENT_TOKEN_TO_BE_REPLACED

Yes Homo: A Study in Subtext

Anyone who has ventured far enough into the Intertubes in pursuit of more information on a favourite show or book, or perhaps companionship on the subject, will have stumbled into the glorious and bizarre world of shipping (that is, for those giving their computer screens blank stares right now, the mental pairing up of characters within the show in a romantic context). They will also have discovered a universal rule: everything is shippable.

Yes, children, everything in this series is shippable! Even I’m shippable, but that is called self-insert and is frowned on in many circles.

Charlie and the Chocolate Factory jokes aside, you shall discover that it’s actually quite true. If any characters appear within the same screen space for more than a few seconds (and sometime if they don’t!) there will be someone somewhere who wants to see them end up together. And this includes (shock and horror!!!) those of the same gender. END_OF_DOCUMENT_TOKEN_TO_BE_REPLACED