Find Me in Another Time: Of Soulmates, Destiny and Time Travel 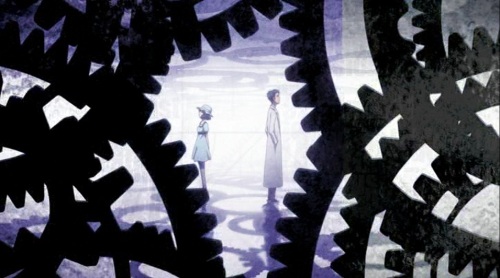 [Contains spoilers for Cloud Atlas, Steins;Gate and, if they’re still spoilers by this point, Madoka Magica]

There’s no better way to show your affection for someone than to get separated from them by the cosmic decisions of the universe and get really, really mad about it. Maybe, a la Cloud Atlas, you’re caught in a cycle of reincarnation and keep crossing paths and bonding, only to be separated by something in every lifetime. Maybe there’s time travel involved as your device for era/parallel universe jumping, and you’re caught in a loop trying to save your loved one (or just your relationship, a la In Time) and leap your way to an eventuality where you can both be safe and happy.

Either way, this brings a big cosmic concept like time or soul travel, proverbially, down to earth, and makes it about people rather than saving the world. Which makes it much more interesting in my book, especially with all the concepts it brings into play.

Any plot like this, especially the ones where wayward souls are involved, will eventually have to bring up the question of fate—something humans have been brooding over for thousands of years, the idea of the pre-ordained path that we’re all traversing. Do we have the ability to step off it and follow others if we become self-aware? Is this giving us the power of the gods themselves? Or at least, the very human power to rage at the gods and the universe for making our destinies so annoying and cruel? END_OF_DOCUMENT_TOKEN_TO_BE_REPLACED