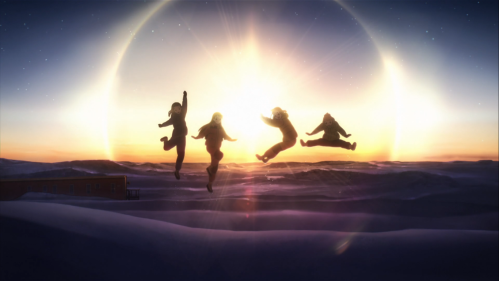 It’s been another big year for anime-watching on my part, with more access than ever before to both the currently-airing series themselves and the hot goss on which of them are worth checking out. And so once again I’ve gathered mini-reviews of my favourite series into one handy-dandy post! This is a mix of series that came out this year, series from days of yore I decided to rediscover, and series that were locked away on Amazon until recently that I’ve only just had the chance to check out (R.I.P., Anime Strike or whatever that was). This list contains coming-of-age stories, steampunk shenanigans, magical mayhem, a friendly skeleton, and a lot of queer themes and female protagonists. If that sounds like your jam, do take a look–I’m happy to share my thoughts, and maybe you’ll find something that sounds fun! END_OF_DOCUMENT_TOKEN_TO_BE_REPLACED

Emotions are a nuisance in espionage. Princess Principal’s leading characters, especially gravity-defying expert liar Ange, make a grand point that for one to survive as a spy, one must reveal nothing, feel nothing, and most importantly, trust no one. It’s delightfully ironic, then, that the heart and soul of the show is not the spy missions that these girls carry out with expert, emotionless precision, but the emotional bonds they form with each other. As with most “ragtag bunch of morally dubious professional misfits” ensemble stories of this nature, what brings the audience back is not in the episodic missions themselves but the colourful characters and their varied dynamics with each other. PriPri is very much a “come for the concept, stay for the cast” affair, with a moving throughline about girls supporting each other that ties the series together much more neatly than the overarching political plot. END_OF_DOCUMENT_TOKEN_TO_BE_REPLACED

Showing, Not Telling in Princess Principal

I’ll admit it, I started watching Princess Principal because it just looked fun. Young women kicking ass as spies in a steampunk fantasy version of turn-of-the-century London, set to a jazzy soundtrack and wrapped up in science-magic? Yes, please. I’ve been pleasantly surprised to discover that this show that I picked up solely for its geeky Cool Factor is… actually really damned good, delivering consistently sharp writing, interesting and layered characters, and some wonderfully efficient and intriguing magical worldbuilding that makes fantastic use of that old writing adage “show, don’t tell” that paints a vivid picture of its fantasy world from its very first scene.

Because it did such a good job laying the groundwork and piquing this viewer’s interest, let’s look just at the show’s first episode, and the small but important details the premiere gives us (and how) that let us build a picture of the world… without leaning too heavily on narration, pausing or cutting into the action to explain what’s going on, or having an audience point-of-view character that others teach things to.

Head to Lady Geek Girl and Friends for the full post!