Laugh-Sighing at Media Reactions to The Hunger Games 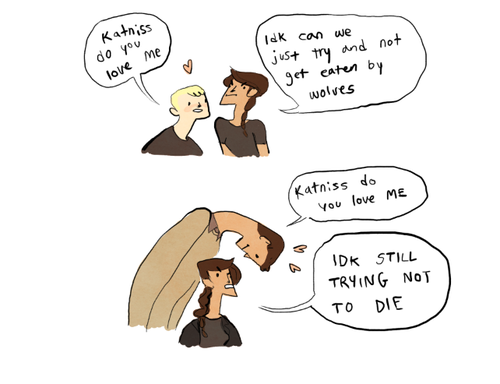 Writing Buddy and I went and saw Catching Fire last week, which was an exercise in film excellence and reignited emotions for the series. It’s been a while since I read the books (just long enough, it turns out, for me to forget about the goddamn mutated monkeys of terror holy cow) so it’s been interesting to get back into the swing of all things horrifyingly dystopian and revolutionary… and find my palm raising towards my face once again over all the interview questions regarding the love triangle.

The love loop in The Hunger Games is one of the more irritating ones in the sphere, I think, since though I liked both ‘love interests’ as people and characters and acknowledged Katniss’ positive dynamics with both of them, it seemed wholly, achingly unnecessary. The relationship with Peeta was the one that got the most development and, well, the one we saw the most of, and it would have been nothing short of a cop-out if our heroine (who was expressedly not interested in romance at all) had ended up with the other guy. From a conservation of detail point of view, it was pretty obvious who Katniss was going to end up with if she was going to end up with anyone, and any touchy-feelyness on Gale’s part seemed like added drama for the sake of added drama.

And, of course, the romantic angle isn’t what the series is about, it’s an element shoved way, way at the back in terms of importance. It’s a story about a sadistic dystopian government that rules by fear, the division between oppressing classes, the power of hope and human endurance and the desire for freedom and revolution. It’s a hard-hitting, violent sci-fi in a terrifyingly believable future, a commentary on the media of our world and our society’s casual bloodlust and voyeurism. It just happens to have a teenaged girl narrating and leading it, who happens to be caught between the affections of two dudes, and naturally and very, very ironically this is what the media latches onto. END_OF_DOCUMENT_TOKEN_TO_BE_REPLACED

Tagged as Catching Fire, Mockingjay, The Hunger Games, YA fiction