YA is one of the most versatile and interesting fields of publishing right now, full of a glittering spectrum of stories of all genres and protagonists from all walks of life and identities. And you know me, I love a good coming-of-age story, whatever shape it may take… and what better way to celebrate those many shapes than to review three wildly different, but all brilliant, YA novels together? Let’s dive in! This time round we have psychological thrillers, we have mythology retellings*, we have ruminations on fame and friendship and fandom.  END_OF_DOCUMENT_TOKEN_TO_BE_REPLACED

Tagged as A Line in the Dark, Alice Oseman, I Was Born For This, LGBTQ+, Madeline Miller, Malinda Lo, queer YA mini reviews, The Song of Achilles, YA, YA fiction

Coming up with a solid mythology, belief system, or set of traditions and folklore, is a key part of a lot of fantastical worldbuilding—making stories to go within the story, if you will, to make the world feel more fleshed out. After all, it’s human nature to tell stories, and any group of humans will inevitably come with their own folklore, be they creation myths or cautionary tales. But the tricky thing with stories, especially ancient ones passed down by word of mouth, is that even though they’re presented as historical fact, they may not be as true as they once were. Or, in the case of the in-universe folklore I’m talking about in this post, they might contain more truth than the characters hearing them first realised—throwing the nature of the stories into question, and making the world they’re in much stranger, richer, and more mysterious for the reader engaging with them.

Spoilers for the end of Night in the Woods beyond this point! END_OF_DOCUMENT_TOKEN_TO_BE_REPLACED

Tagged as Ash, Malinda Lo, mythology, Night in the Woods

I always admire authors that can switch between genres with ease, just as I admire authors who can write progressive stuff without wholly making a fanfare of how progressive they’re being. And if nothing else, I have to admire Malinda Lo not just for her lovely and addictive prose but for her ability to create a problem opposite to what I usually have: being emotionally invested in a YA love triangle and legitimately interested in how it turns out, perhaps even more than my interest in the main spine of the story. Holy cow, right? Is that even possible?

Malinda Lo has two branches to her writing career, the first being the fantastical Ash and Huntress, set in the same world but many years apart, and the modern-day (quite literally set a little while into the future after it was written, which gives you a hell of a surreal feeling when the story dates itself at August 4th 2014 and you’re reading it on August 2nd) sci-fi conspiracies-and-aliens-and-psychic-powers-oh-my! duology Adaptation and Inheritance. As previously discussed, the two genres really are two sides of the same coin, and though I feel like she has an easier grip of her fantasy books (the writing is much prettier, in any case) each of Lo’s series are as enjoyable as each other and retain an aftertaste recognisable to all her writing. And bisexuals. Did I mention that?

Sorry, I’m just a little excited. Apparently it’s a tricky thing to deal with in fiction, most likely because it’s also a tricky thing to deal with in real life and the swathes of erasure and negative stigmas against bisexual people in both. Which is a shame, because first of all and on a serious note, that’s ruining a lot of lives and pushing a lot of people into closets they don’t want to be in. And secondly because, as I talked about before, there’s something inherently interesting about a multi-gender love triangle, perhaps because it’s just a break from the norm (girl torn between two hunks, or hunk with two girls at war over him, typically) or because people attracted to more than one gender simply gives way to even larger and wackier love quadrangle shenanigans. I love a good tangle of affection, when they’re done well. And my gosh does Malinda Lo do it well. END_OF_DOCUMENT_TOKEN_TO_BE_REPLACED

Love triangles as A Thing still peeve me on a deep and fundamental level. However, there’s a strangely unexplored variation on them that I allow the good grace of being interesting. Bisexual love triangles—food for thought, no? Your plucky teenaged heroine sits at the centre of a romantic subplot trying to choose between two love interests as she invariably does, yet one of them is a guy and the other is a girl. It’s simple enough, and good in a lot of ways, yet it’s so far underused in mainstream fiction.

Firstly, they acknowledge that bisexuals exist, if only in a fantastical fictional context because of course they’re a mythical creature of the woodlands in the world we live in. And, in having said bisexual as the main character, they’re immediately presented as sympathetic and heroic and, you know, a normal well-rounded character and person, and not marginalised, stereotyped or included to be titillating. And a full blown love triangle calls for proper development of their relationship, both with their male and female love interests, which staves off the problem bisexual heroines can run into where they’re only labelled as bi in passing because they made out with a girl in university, which is either used for comedy, fan service or a reject-shop-cheap attempt at being inclusive and modern.

It also gives you an immediate second major female character, which is always nice. It’s a little refreshing to see a break from the tried-and-died formula of heroine torn between two hunks! and again, allows for a legit LGBTQ+ relationship to be fleshed out in fiction and provides characters that readers who don’t fit the traditional mould can see themselves in. Of course, including another girl as one point of the triangle doesn’t magically elevate the story from the pit of clichés and problems that teen love triangles seem to be rooted in. E.g., If you’ve got a heroine wobbling to pieces trying to work out what her feelings are doing when she should be focussing on saving the world from whatever, it’s not going to be any less annoying just because one of her love interests is a young woman. There are pros as well as cons to this flip-flop of the norm, as there are with most things that end up in books. END_OF_DOCUMENT_TOKEN_TO_BE_REPLACED

Filed under And I Think That's Neat, Fun with Isms

‘…recently I was in a script read through for the sixth film, and they had Dumbledore saying a line to Harry early in the script saying “I knew a girl once…” I had to write a little note in the margin and slide it along to the scriptwriter, “Dumbledore’s gay!” [laughter] If I’d known it would make you so happy, I would have announced it years ago!’

There’s a sticky situation one runs into when writing LGBTQ characters. So you want to write some non-heterosexual people into your story, whether to reach out to an abysmally underrepresented minority (which really isn’t such a minority, not that the media would have you think so) or to look cool and hip and fresh by being inclusive or to lay out fish hooks for the slash fans. The question then becomes, how does one write in gay characters while making them characters and not just gay?

I name this post after the case of Albus Dumbledore from the Harry Potter series (really, should I have to spell that out in this day and age?), as his acclaimed author simply let it drop one day that the character was in fact homosexual, expressing it as Word of God rather than having it come through in the books themselves. This inspired an ovation from some and outrage from others, and academic eye-narrowing from all sorts of angles about the nature of this decision.

Was J.K. just pulling the factoid out of her hat after the books as a cheap attempt to seem inclusive and an ally? This seems to be a question still floating around. One argument is that there was absolutely nothing in Dumbledore’s characterisation that indicates he was gay, which would have saved J.K. Rowling conveniently from any obtrusive moral guardians while the books were still being published. The counterargument is that of course there wasn’t any evidence of Dumbledore being gay, because, well, people don’t actually come with neon signs announcing their sexuality. 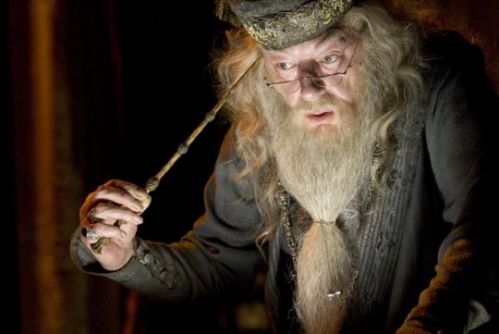 Am I sensing a cop-out, or a legitimate representation?