Hell Hath No Fury Like a Woman Written Scorned 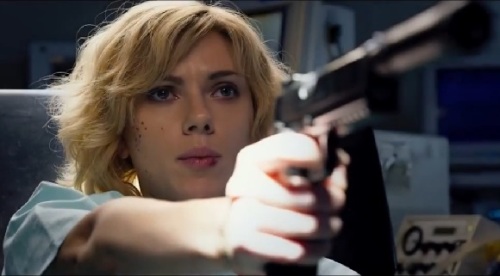 [SPOILER WARNING for The Rebellion Story. If you’re in the magical girl loop or just don’t care, read on unafraid]

Not gonna lie—there’s something immensely satisfying about watching a character rise up powerful when they’ve been everyone else’s kicky bag in the story so far. Especially if it’s someone characterised as traditionally weak and helpless, a young woman for example. Fighting back against the resident nasties, in whatever form they come, removes the damsel in distress frame and makes her her own vengeful hero. Bonus points if she’s superpowered up now, bonus bonus points if it’s something the baddies wanted but backfired. Yeah. It’s bitchin’. But it’s also a trope that can be used quite problematically.

Look at Lucy for example, or at least the trailer for it—I might be jumping the gunshark to cast judgement over the movie before it’s even out, but bear with me—aside from being all “woo-hoo! A lady-led superhero movie!” something about it rubbed me the wrong way. At first I thought it was just the ‘using more of your brain’s capacity makes you an automatic badass’ thing, which, I mean, I’m not a neuroscientist but I’m pretty sure that’s not as grounded a theory as some might think, even if it is explained by Morgan Freeman. Then I realised that the badassery I was watching played exactly into this little narrative idea that grates on me: Our Heroine is a force to be reckoned with, oh yes, but only after being manipulated, fondled and beaten to a pulp.

The drugs that make Lucy superhuman were implanted in her completely against her will, removing any agency from the get-go, and they were only activated when she was kidnapped by (presumably?) a rival gang and violently injured. Yes, there’s something very rewarding in watching the thug come back in thinking he’s got the upper hand and Scarlet Johannson smirking and kicking his expectations square in the crotch then swaggering out of there. But that’s the trap this trope falls into—women granted the ability to be world-shatteringly badass, but only once everything else is stripped away from them and, as the trailer states, they’re losing everything that makes them human. It’s sister cliché is ‘she’s suffered so much she’s really done and she’s going to turn evil’. It happens to perfectly respectable main characters everywhere, from Buffy to Madoka Magica. And it can be annoying, problematic, and occasionally make no damn sense. END_OF_DOCUMENT_TOKEN_TO_BE_REPLACED

There is no message, however, about how it’s unsafe to run with scissors. Quite the opposite

Watching the first few episodes of Kill La Kill felt a little like being chained to the back of a speeding car while intoxicated. The pace is relentless and the visuals are nothing short of wacky, even cartoonish, and the show overall takes no shame in being camp, voyeuristic and completely ridiculous. I had two main questions when watching this much-discussed (can you say controversial and problematic fan service?) piece of hallucinogen in animation form: first of all, why is this so entertaining? And second, what is it trying to tell me? Just because one of the main characters is a talking, blood-drinking, transforming school uniform that grants superpowers, doesn’t mean the show doesn’t have anything intelligent to say, damn it.

Kill La Kill follows seventeen-year-old Matoi Ryouko on her quest to discover who murdered her father, which takes her to the top of a tiered, segregated academy town to a high school where your uniform determines how much power you have. No really—they’re infused with Life Fibres that grant the wearer superhuman abilities. Thus, the higher you rank in the social ladder, the more you’re capable of flinging your fellow students into a madcap spectacle of a battle filled with shouted attack names, mech-suits, star effects and big red text.

As Ryouko discovers when she finds her father’s secret lab, the most powerful of these are ‘Kamui’—‘godrobe’, in some translations—costumes made entirely of Life Fibres that bond with their wearer by drinking their blood (and strapping them into a cringe-worthily revealing outfit, but we’ll get to that later), granting the ability to be the ass-kickiest of all ass-kickers in this hierarchy based on ass-kicking. Ryouko dons one, as does her rival, student council president and iron-thumb ruler of the Academy Kiryuin Satsuki. What follows are a series of intense, zany head-to-head fights as she works her way through the student body to get to Satsuki at The Top, convinced that that way lies knowledge and revenge. END_OF_DOCUMENT_TOKEN_TO_BE_REPLACED

Sometimes people write to get a point across, fiction being an excellent vessel for social commentary, or, a good way to say “See this? This is bad” in less literal and more exciting terms. It also opens important issues up for discussion, and gives the people watching and studying room to examine them in a slightly detached context leading to a better understanding. But, as previously discussed, this kind of storytelling is very, very easy to mishandle.

Like, say you think sensationalised violence in cartoons is awful. So you make an animated movie full of over-the-top violence, blood and gore and terror, designed to make the audience uncomfortable and thus show how bad the thing is in and of itself. However, if your audience doesn’t get the memo that it’s a “pointing out how bad this is” art piece either by missing your magazine interviews where you explain that or if you have to explain it in the first place, well, you’ve just made another sensationalised violent cartoon for the market, haven’t you?

Or say you make a movie that aims to point out how creepy and terrible the objectification of women is in the world of fantasy, action and other traditional comic book genres, by making a movie that provides good examples of how it’s done and showing how awful it is for the people involved. But also showing them fighting back against it all and taking agency and power for themselves and being the heroes of the story with the drooling audience clearly the villains. And to prove that it’s something intelligent that’s meant to make you think, you twist in some Inception level universe-travelling. Well, then you would have made Sucker Punch. And you may or may not have made your point. END_OF_DOCUMENT_TOKEN_TO_BE_REPLACED

A note before we begin a somewhat lengthy, ponderous and example-filled post: I make an effort not to generalise when talking about anime since it’s a medium rather than a genre, with the same range of content between high fantasy and slice-of-life sitcoms that Americans and Europeans find in their live-action TV. However, for the purposes of this article I do note that a lot of the same cultural conventions remain the same throughout anime series, understandably enough—a lot of them have a similar sense of humour and values and will be affected by the climate that they were made in and the audience they’re made for. And in this case, whether hard-hitting or escapist, that is the teenager. END_OF_DOCUMENT_TOKEN_TO_BE_REPLACED