Of Arthurs and Lancelots: Mythic Origins of the Irritating Polygon

In banquet halls of old, as bards and poets pranced around regaling everyone with the latest daring legends, I wonder if there was ever any guest leaning on the table sighing “Not another bleeding love triangle.” Because, as previously discussed, they are everywhere… and have been for thousands of years.

Why is this? Well, the bottom line is, people love a bit of drama, and romance tends to generate an awful lot of that, especially when it can be tweaked and stakes-raised by the magic of storytelling—this has been true as long as fiction has existed. In past eras arranged marriages were also much more common, leading to more potential for conflict of affections and love that Society Just Doesn’t Understand.

Another reason there are so darn many of the love polygons peppering our legendary literature is because they were part of a strong oral tradition, and thus a million different versions are floating around in the fictional ether. People were always on the lookout for new stories and a lot of them were mashed together, borrowed from and mutated over time and over mass handling, seeing as half the fun was in the telling—pre-established myths were often adjusted by the individual storyteller, often to make the setting more relatable to the locale of their audience, to change the appearance of the goddess-like beauty of the heroine to match and thus flatter the hostess, or just for funsies.

In any case, the key elements of these grand legends of love remain the same and are, interestingly enough, still the mould that modern love triangle dilemmas are based on. 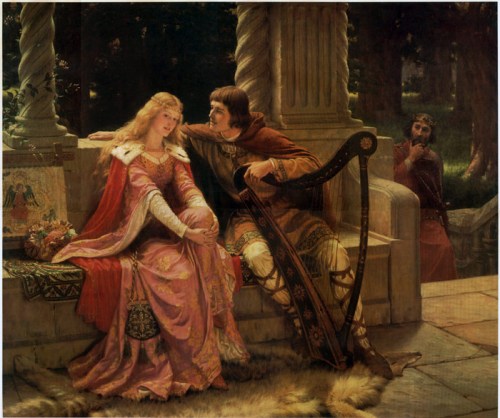