The Gloriously Goofy, Geeky Girls of Keep Your Hands Off Eizouken!

In a media climate with a lot of restrictive expectations for the behavior and beauty standards of young cisgender women, there’s always something gratifying and delightful about fiction that lets female characters be goofy, expressive, and a little bit weird.

Keep Your Hands Off Eizouken!, a series about three high school girls using a school club to start their own animation studio, inspires exactly this feeling (as well as a general, inescapable sense of creative joy). Through both the character design and characterization of its three protagonists, Eizouken challenges a lot of the tropes that often loom over portrayals of nerdy, passionate teenage girls… and, if we’re being honest, teenage girls in general.

Two Eizouken posts in a row? You betcha. Read this one in full at Anime Feminist!

Fittingly for a series so inspired by theatre, Revue Starlight has quite a spectacular finale. Across its twelve-episode run, the musical, magical, swashbuckling school story explores themes of competition and rivalry, unfair systems, and love and friendship. It brings these all together in an ending that packs a wonderfully metatextual and rebellious punch, with its main characters Karen and Hikari (and the relationship between them) taking the lead.

You knew I wasn’t finished writing about this show. Read the full piece on AniFem!

On paper, Laid-Back Camp and Ms. Koizumi Loves Ramen Noodles sound quite similar. They’re both slice-of-life shows about girls with niche interests or hobbies, portrayed in loving detail—camping and ramen noodles, respectively. Each series also has a small ensemble cast headed by two standout main characters: a quiet, withdrawn girl with the greatest dedication to the special interest that is the subject of the show, and a more outgoing, effervescent girl who wants to be closer to her.

Alike as their premises may sound, the two shows go in very different directions in regards to this central relationship. In Laid-Back Camp, the main characters’ relationship develops over the course of the series and the show becomes a rewarding story about female closeness; Ms. Koizumi, on the other hand, sticks to the status quo established in its premiere, which creates a stale and repetitive story that perpetuates negative tropes about queer women along the way.

Pop Team Epic and the Value of Letting Girls be Absurd

Pop Team Epic blasted onto our screens at the start of the winter 2018 season and has been confusing and amusing viewers ever since. It’s fast-paced, surreal, absurd, a little crude, entrenched in pop culture, and just plain ridiculous. It stars Popuko and Pipimi, a pair of schoolgirls who, in taking this wild and wacky spotlight, step into a role not often given to girls in comedy. Self-aware as the show is, the characterisation of Pop Team Epic’s leading ladies serves as a sort of metatextual raised middle finger to the concept that girls should be cute rather than funny.

Escapism and Healing in Recovery of an MMO Junkie 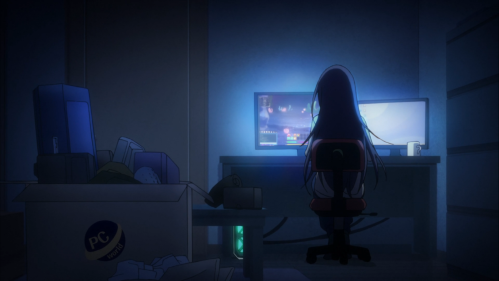 Recovery of an MMO Junkie is a bit of a misleading title. Looking at this romantic comedy by name and genre alone, it seems at first to be about its geeky protagonist, Morioka Moriko, getting pried away from her addiction to online games and finding happiness (and perhaps some good ol’ romance) in the real world. Instead, MMO Junkie gives us a story about finding happiness and fulfillment through online games, using their safe zone of community and anonymity as a foothold to regain emotional confidence. More importantly, it gives us Moriko herself, a complex, flawed, and likable female protagonist who provides valuable representation for adult women with geeky interests, as well as a moving personal story about anxiety and recovery.

Read the full article on AniFem!

Tagged as AniFem, Net-Juu no Susume, Recovery of an MMO Junkie

FLIP FLAPPERS is many things: a magical girl adventure through visually stunning fantasy lands, a multi-layered exploration of its characters and the nature of perception, a problematic fave, and a queer coming-of-age story about an insecure girl who’s just trying to figure herself out. The story follows Cocona, a (seemingly) ordinary girl who gets swept up in a quest to collect wish-granting “fragments” in Pure Illusion, a magical dream-space that changes to reflect the psyche of those who enter it.

Each visit to Pure Illusion is both a genre homage and a character exploration, often touching on themes of coming-of-age and the complicated business of sexual maturation. As part of this trend, Episode Five, “Pure Echo,” develops and explores our heroes and the trials of adolescence by throwing them into a world that combines Class S, a genre of sweet yuri romance, with horror. Now, what in the world could that strange combination be trying to tell us?

Head to AniFem for the full article!

Adding Salt to Sweet Vanilla: The Complex Women of ToraDora! 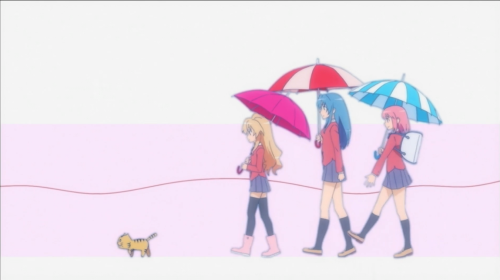 ToraDora! tells a story about the bizarre tangled intricacies of teenage love, complete with matchmaker plots, zany schemes, and an increasingly convoluted love quadrangle that’s played for both comedy and drama. It also tells a story about how everyone has issues, inner turmoil, and inner selves that they keep concealed, usually with the intention of preserving a certain image of themselves for the people around them.

It starts small by introducing the audience to protagonist Ryuji, who most of his classmates assume is a delinquent because he has “the eyes of a killer” but is actually a studious, quiet, and compassionate boy. This makes him a neat foil to his classmate Taiga, who at first glance is small, cute, and unthreatening, but has an aggressive temper. These two outcasts prove that outward appearances can be deceptive, but as they become friends and agree to help set the other up with their respective love interest, this theme of outward persona versus inner personality deepens and becomes much more poignant.

Head to AniFem for the full article!

The Afictionado
Blog at WordPress.com.