Creativity, Discipline, and Eizouken (or: Everyone Needs a Kanamori in Their Life) 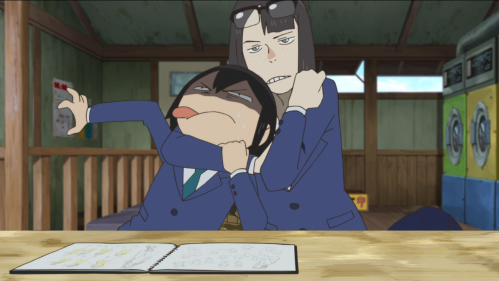 There is a pervasive myth of The Creative Genius: the great writers, or artists, or musicians, or filmmakers must receive divine inspiration, or perhaps are simply born with a unique knack for Making Art that mere mortals are not. Creators are still asked things like “where do you get your ideas?” as if a muse descends from the heavens and bestows them to a select chosen few. The idea of creation as work is, while more widely understood in today’s capitalist hellscape, still something a lot of people are wrapping their heads around. And yet, creative work is exactly that: work. That creative lightning strike is still part of the process, but you need to put in certain efforts to bottle that lightning and actually make it into something viewable by others.

In my last blog post about Keep Your Hands Off Eizouken! I talked a lot about the sense of creative wonder, and I talked mostly about the characters Midori and Tsubame. This time, I want to talk about Kanamori Sayaka—the invaluable team member who actually wrangles that wonder and forces it to take shape, providing representation of an oft-understated aspect of the creative process: discipline.

I am, at time of writing, in my third year of a PhD, doing a creative thesis. What this means is that I’ll be submitting a work of fiction of up to 70,000 words, accompanied by an exegesis of up to 30,000 words explaining the purpose of the creative work and the research behind it (and justifying my Original Contribution to Knowledge). If that sounds like a lot of words, that’s because it is! Naturally, being afforded the chance to write, and write about writing, as part of my career, is very exciting… but just because I love writing and analysing fiction, doesn’t mean this has been all smooth sailing. In fact, it’s been quite daunting and draining at times, and, well… a lot of hard work.

Because writing is work. Having had fiction writing as a spare-time passion for so many years, it’s been a real adjustment to get myself into the mindset of creating not just for fun but for the purpose of a specific finished product. “Oh, I don’t really feel like writing today” won’t fly when you have an approaching deadline. You’ve got to sit down, get into the zone, and make some words happen. Will they be amazing words? Probably not, a lot of the time, but again, when a draft is due, not-amazing words are better than no words. As a perfectionist I’ve really had to train myself to be more accepting of the art of the Messy First Draft. To paraphrase some advice passed down from various lecturers, you’ve got to drag a big ugly slab of marble into your studio before you can start carving away at it to make your beautiful statue.

In Eizouken episode six, in one of the Biggest Moods of the series, Sayaka asks Midori for more detail in her storyboards. Midori replies that the detail is all “up here”, tapping her head. Sayaka, exasperated, reminds her that it’s no good if the ideas are locked away up there. All the cool ideas, concept sketches, and enthusiastic conversations in the world aren’t worth jack if they aren’t ever converted to something tangible.

This sounds harsh, but in creative industries, this is just the practical truth. The down-to-earth Sayaka makes a wonderful contrast to Midori and Tsubame’s wild flights of fancy, not just in a way that is very entertaining to watch, but in a way that highlights the balanced needs of a creative team. She’s the business sense, the negotiator, and the one who both makes sure the amateur anime studio has somewhere to submit their work, and work to submit in the first place. In the first arc, it’s Sayaka who reels her creative brethren back in when they float away into the pursuit of perfection, reminding them that if they try to make the animation as beautiful as what they’ve envisioned in their heads, they’re not going to make their deadline. It’s a bit painful for the animators, but they eventually agree with her (and end up surviving the process). 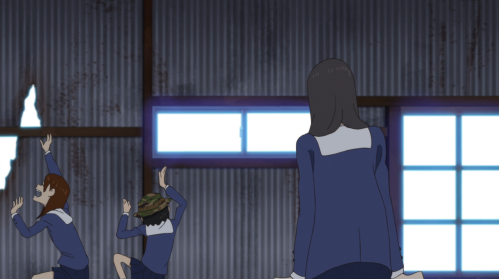 Sometimes compromise is essential, and ends up working better in the end—to draw from my own experience again, at the end of 2019 (two years into my project) I decided after a long conversation with my supervisor to restructure my entire creative project. It was originally envisioned as something much bigger and more epic in scope… and while I loved that story idea, I also kinda hated it because it was such a daunting amount of work, what I’d written so far didn’t feel quite right, and the whole thing was snowballing into a dreadful feeling of burnout (which I also contextualised with anime in this post).

I’ve now pared down the narrative plan to be much smaller, essentially taking what was initially the first arc of the story and, with some tweaks, making it the whole thing. While this felt like a “betrayal” of the story for a moment, I quickly realised that this new version

Deadlines and requirements can feel like restrictions that should be the “natural enemy” of creativity… but the truth is, working around them is a form of creativity in and of itself, and having those parameters can actually set you on the path to new and greater possibilities. And restrictions and deadlines also ensure that you reach the end of that path in the first place. I’m a big fan of Ideas and Cool Concepts in a way that makes Midori very relatable, but the unfortunate truth is I’m much better at sketching out and starting projects than I am at finishing them. Midori represents The Creative Spark, and Sayaka represents the actual discipline and hard work you have to put in to turn that spark from a colourful, floaty concept into an actual piece of work that other people can enjoy. Eizouken demonstrates that you really need both these things to make art (especially on a professional level).

Sayaka is by far the most serious and ruthless of the main trio, but she’s not presented as antagonistic, or cynical, or a buzzkill. She’s an important part of the triangle, arguably the one that completes it and makes Eizouken a story about an animation studio rather than just “a couple of friends throwing anime ideas around”. She’s there to coach Midori through when she’s struck by imposter syndrome, and to save her team from working themselves into an early grave by managing their expectations. She’s there to remind them—and us—that while creative industries are sparked by passion and inspiration, they’re fuelled by discipline and hard work.

Every creative person, especially those who want to make a job out of it, ought to have a Kanamori Sayaka in their lives—whether that’s a friend cheering you on and keeping you focussed, or something in a more professional capacity like an agent or a manager. Or maybe just a voice in the back of your head, or one of those “do it for her” posters a la The Simpsons. She’s there to remind you to follow your heart but use your head, and push onwards towards the finish line even if you encounter bits that aren’t so fun. Because the end result is amazing—you’ve made something that only you could make! You’ve changed the world in a small way! And you couldn’t have done it without putting in the hard yards. Finish your projects. Meet your deadlines. Take compromise with grace. Do it to make Kanamori proud.

Now, all that said, I’m writing this when I should probably be writing more of my creative piece, so I’d better go.

Tagged as Alex yells at their thesis, Eizouken ni wa Te wo Dasu na!, Keep Your Hands off Eizouken!

2 responses to “Creativity, Discipline, and Eizouken (or: Everyone Needs a Kanamori in Their Life)”