I Can’t Believe I Care This Much About Marvel Again (A Review of Loki: Where Mischief Lies) 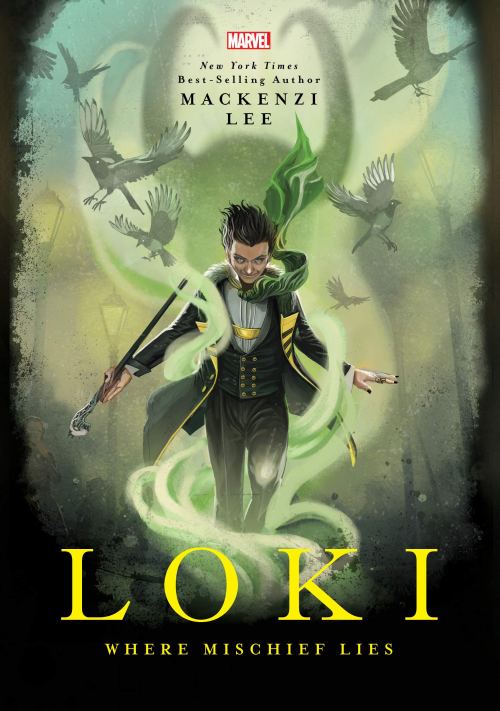 I’ve made my exhaustion with the Marvel Cinematic Universe quite public in the last little while. It just got so big, so convoluted, so self-conscious and yet so self-congratulatory. Which is a shame, because there really is some good stuff in there, and a lot of potential for fun… as this book reminded me, coming out of left field and smacking me over the head with an emotional investment in a slice of the Marvel world. Loki: Where Mischief Lies (penned by Mackenzi Lee, most famous for her queer historical YA) is a gorgeously written, tightly plotted tale of gods and magic that contains just the right amount of hijinks, and contains a frankly graceful rendering of Loki that gets right what makes his character so interesting and so likeable… and, as a bonus, he’s not at all heterosexual. Having picked this up for work and gone in with very few expectations, this book blew me away, and I am so delightfully baffled that it gets its own post.

Where Mischief Lies is a prequel set long enough before any recognisable Avengers shenanigans that it has a certain flexibility about which continuity it’s from. When it relies on prior knowledge, it seems to be drawing mostly from the movies, and it brings in a villain that has yet to be used in the cinematic universe. For recommendation purposes, the most important thing is that it’s accessible without too much Deep Comic Lore under your belt, and, again, is far enough removed from the current movie timeline that it can almost be read as a standalone. It’s got a sharp plot that’s action-movie-y without being too silly, a protagonist/antagonist conflict that’s personal and interesting, some lovely prose, and, most importantly, it’s just delicious fun. Remember when superhero movies were fun?

Okay, when I say things like that, I’m reminding myself—if you enjoyed the most recent wave of movies, that’s 100% valid for you. In fairness, Where Mischief Lies does feel like it was engineered in a lab to draw me back in. I unabashedly stan the first Thor movie in its glorious commitment to being colourful, mythic, and magical, while also not taking itself too seriously. I have a particular interest in Trickster characters. I have a particular interest in Victoriana. I love me some descriptive, atmospheric writing. And it’s queer! And not in a “character mentions a dead husband in one scene” kind of way!

Our tale is, as the title implies, all about Loki. He’s already feeling out of place in the glowing, heroic halls of Asgard, his only friend the enchantress’ apprentice Amora, hungry for his father’s praise but fairly certain that Thor is the favourite. This isn’t helped when Odin, looking in a mirror of prophecy, witnesses one of his children leading an army of the dead up the Bifrost. Loki hazards a guess that it’s him in the vision, but, desperate to make sure, breaks into the vault with Amora to get a glimpse himself. Shenanigans ensue, Amora is banished to Midgard (Earth), Loki is left forlorn and angsty in Asgard. Years later, after yet more shenanigans, Loki tries once more to win Odin’s favour back. Odin sends him on a mission to Earth, in a last “don’t screw this up” kind of peace offering. Loki thinks Earth is dumb and gross, but can’t come home until he’s sorted things out… and so, in the meantime, is stuck in Victorian London with a rag-tag crew of paranormal investigators that serve as a very rudimentary prototype for S.H.I.E.L.D. One of them is a good good boy named Theo who’s a little bit cute.

I realised partway through the book that this neatly mirrors Thor: shenanigans in Asgard, an attempt to be heroic and clever and cool goes wrong, Our Hero ends up stranded on Earth as a fish out of water, where he gains a reluctant appreciation for the locals, and ends up Saving the Day when forces beyond this world clash in a very down-to-earth setting. It goes a little differently, but I can appreciate the parallel, and it feels like it fits neatly into the overarching narrative pattern of the MCU’s “episodes” while also avoiding feeling formulaic. And, as I said, it’s fun, just a rip-roaring little adventure with a protagonist who’s engaging to watch (or in this case, read) as he stumbles through his character development.

Lee’s handling of Loki is, honestly, nothing short of graceful. Loki as a character sits in this sort of in-between space (appropriately enough for a Trickster), with a complex mix of aspects and the ability to fulfil a mix of roles for the plot. Where writers stumble, in my opinion, is where they swing the pendulum too far in one direction. If you lean too far into the aspect of Loki as a villain, as a snarky, slippery, scheming prince, you lose a lot of his playfulness and ambiguity. If you lean too far into Loki as a tormented, displaced baby who never did anything wrong, you effectively defang him, and that’s equally as not-fun to watch. The joy of Loki rests in acknowledging that while he’s a sympathetic character, he’s also, fundamentally, a bit of a shit, and that’s what we like about him.

The Loki of Where Mischief Lies strikes this balance wonderfully. This is helped along by the fact that this is effectively Loki’s coming-of-age story, and, though he’s immortal and obviously ages differently to humans, we still get a strong sense that we’re looking at an adolescent caught up in his feelings and making an accurate amount of bad decisions. Loki is deeply sympathetic: he longs for validation in a home that sees him as an outsider even as they try to include him, he clings to the one person who offers him a shred of closeness even if she’s clearly not a great person, he wants to be loved but also expects everyone to hate him and so systematically pushes people away before they can reject him. He’s a tangled ball of yearning.

He’s also a cheeky, snarky little crap. He plays pranks on Thor, his internal narration and his dialogue are full of quips, and he reacts to his aforementioned yearning for acceptance by hatching A Grand Scheme to hoodwink everyone into seeing him as a hero. The balance, though, is struck well: as is demonstrated nicely with said Grand Scheme, Loki’s mischief and his melancholy are intertwined, and you can see how one leads directly from the other like a personality-snake eating its own tail. Crucially, Loki is never so sarcastic and darkly humorous that it becomes annoying—to my mind, Lee has stirred just the right amount of sass into the mix here to frame Loki as our snarky teen narrator who is ready to loathe the world, while making him not so abrasive that his outlook on said world gets grating to read.

He also has a personal connection to the (character who ends up being) villain of the story, making this exactly the kind of tight, character-driven conflict that I love. Having not read any comics, I didn’t recognise Amora, and felt she was an effective baddie here—you can tell she has manipulative tendencies early on, but you can also see why Loki likes her and needs her, and the complex tale of toxic friendship (with a dash of sexual tension) this turns into is really quite fascinating. WB, who recognised Amora from comics of yore, reckoned this was a nice reboot for her character; so I’d say there’s something enjoy about her whether you know her or not. Overall, I’d say this book does a solid job balancing the wink-nudges to older or other Marvel stories while simply standing on its own two legs.

And what of the queer stuff, you say? Well, Loki’s very blasé about the whole thing: when asked about his shapeshifting into feminine forms occasionally, he clarifies “I don’t change my gender. I exist as both.” Theo is an Earthling dude who likes other dudes, and is, as well as being a charming character, our window into how Loki can really wield the transformative, transgressive powers of the Trickster. After hearing about the homophobic violence in Theo’s past, Loki is horrified, and explains that such things don’t happen where he’s from. Loki presents a view of potentiality with his descriptions of Asgard as a place where sexuality and gender don’t really matter in the way they do on Earth, and gives Theo a flash of hope just knowing that a place like that exists.

For me, it would have been nice to see some of this playing out in our scenes in Asgard (it would’ve been as simple as one mention of a queer couple in the background), but it’s a nice thought nonetheless. While it is drawn attention to as something different, there’s something beautiful about the shrug-of-the-shoulders way Loki’s non-binary gender and non-exclusive sexuality are presented. And again, Loki is very much the sympathetic protagonist of this story, so it dodges the stigma that only tricksy villains can be your queer characters. How do things play out with dear Theo? Well, I’ll leave that to you to discover if you like, but let’s just say it’s left me hankering for a sequel, or even a Theo-related spinoff book. Me, asking for even more Marvel spinoffs? Who’d have thought! What is the world coming to!!

Can you tell I enjoyed the hell out of this book? It appealed to my love of the mythy and the magical weaving in with the ordinary world, the characters were varied, complex, and fun to spend time with, and there was a fight scene on top of a moving steam train. Not to keep ragging on the MCU, but this book really did serve as a reminder of what drew me to it in the first place: those neat, episodic stories that explore a theme and a character through some tightly-woven action and entertaining hijinks. And, not to keep ragging on the MCU, but this is just another example of how YA fiction is running circles around mainstream movies in terms of queer rep. But hey, tearing up the mainstream while laughing to yourself is a very Trickster move.

2 responses to “I Can’t Believe I Care This Much About Marvel Again (A Review of Loki: Where Mischief Lies)”