Love and Also Monsters: The Emotional Priorities of Type-Moon’s Fantasy 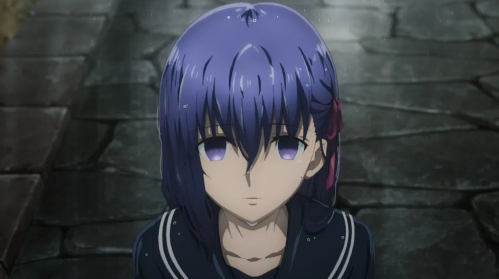 The Kara no Kyoukai movies (aka The Garden of Sinners) are a series of haunting, violent supernatural mysteries involving murderous ghosts, vengeful psychics, and a girl who can see Death… not that you would guess that from the first film’s opening scene. The first few moments of movie number one drop the audience not in a spooky cold open or tense action sequence, but instead into a quiet scene featuring two people hanging out in a small brightly-lit apartment. One of them has been to the convenience store and bought the other some ice cream he thought she’d like. They chat about the ice cream. The conversation is mundane and slightly bickery without underlying malice, giving the audience the impression that these two characters have known each other for a while. It’s only after this very domestic sequence that the narrative gives us a glimpse of ghostly goings-on, and then the opening credits roll.

In a lot of ways, this is a weird choice for the opening minutes of a gritty urban fantasy. Surely the first scene of your story ought to set up expectations for the audience: what genre are we in? What’s the tone? What’s the focus? What are we in for, as we settle in for the next however many minutes of screentime? This opening scene with Shiki and Mikiya hanging out in the flat is very slow and quiet, and does very little to establish any genre conventions that would locate the series anywhere near mystery or horror—in fact, if you hit play not knowing anything about the films, you might guess that you were watching some sort of quaint relationship drama and be very shocked by the appearance of murder and ghosts. And… unconventional as it might seem, you would be absolutely right.

It might seem a little odd, but this soft domestic character-driven opening scene, followed by the short glimpse of spookiness, is placed deliberately to set up audience expectations for the rest of the series. What this opening does is establish the story’s priorities, and once set up, they remain consistent throughout the whole series: this is a story about understated character relationships first, and ghosts second.

Kara no Kyoukai is an interesting beastie, since it lets me, a Fate nerd, glance downstream and see Nasu at the beginning of his career. It means I get to watch him play around with character archetypes and thematic beats he returns to and fleshes out in later works, and it means I get to grimace as he makes Baby Writer decisions like stuffing the thing full of overly-complex Cool Worldbuilding and defaulting to sexual violence when he feels like a character’s backstory isn’t tragic enough or a villain isn’t significantly scary. But I also get to see an interesting quirk of his work play out for, presumably, the first time: this tendency to ground his dark, violent, potentially world-shattering fantasy conflicts in small-scale, very domestic human relationships.

This is a quirk of the studio’s, too: Kara no Kyoukai was the first Type-Moon adaptation by ufotable, and it’s interesting to see how they return to this technique in their later collaborations too. I always thought it was a bit odd that Fate/Zero, the great intrigue-and-action story that it is, opens not with a fight scene or even with any of the scheming conversations that fill the first episode. No, it begins with Kiritsugu meeting his baby daughter for the first time, and talking to Irisveil about his concerns for their life together going forward. The first of the Fate/Stay Night: Heaven’s Feel movies, also brought to life by ufotable, employs a similar technique again, opening not with one of their gorgeously animated fight scenes but with a slow, quiet sequence that tells the story of how Shirou and Sakura met.

Again, these might seem like odd choices from a narrative point of view. Compare these to something like the Fate/Apocrypha anime, which goes the much more traditional route and opens with an eye-catching, heart-pumping battle sequence in media res. It throws you in, and gives you an idea of what to expect, what this story is about, and gets you going “hell yeah!” with one hand up in the air and the other buried in your popcorn. Next to that, the quiet, character-focused introductory scenes of Kara no Kyoukai, Fate/Zero, and Heaven’s Feel seem like they belong to a different franchise, nay, a different genre altogether, despite all having the same epic urban fantasy genes. But it’s important to realise that though they might seem to be chalk and cheese, these opening sequences are all doing the same thing: telling us what these stories are about. 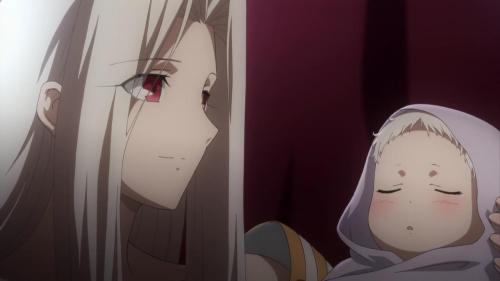 Oh, sure, there’s a corrupt all-powerful wish-granting magic thing running amok and lots of duels between mythological characters, but what is Heaven’s Feel about? At its heart, it’s about the relationship between Shirou and Sakura, the way they help and support one another, and the way they have—and will continue to—give each other hope. And that opening scene tells you exactly that. The same is true for Fate/Zero: sure, there’s mages flinging philosophy and spells and bullets at one another and ancient kings getting into spats, but what it’s about is Kiritsugu’s moral conundrum and the tragedy of the broken Emiya family… a brokenness that begins to heal by the end of Heaven’s Feel, in a character-focused plot that, for me, ties the two narratives together more effectively than any overarching magical lore could.

It’s an important thing to remember when dealing in any story with complex lore and high stakes: if the audience isn’t given an effective and emotive human element to attach to, none of that matters. Does your fantasy world have a history and magic system with the girth of The Silmarillion? I hate to say it, but you reach a point where none of that is worth caring about unless you’ve gotten me to care about the people who inhabit this world. Amidst Kara no Kyoukai’s convoluted Baby Writer attempts at intricate worldbuilding and Dark Gritty Fantasy, what ultimately elevates the series is that, even back then, Nasu (and ufotable, working to bring the story to life) understood that.

From the get-go you, as an audience member, know that this is a story about two people who care about one another—everything else is secondary. Shiki and Mikiya’s relationship is the backbone that holds the series together, the emotional core of that paradoxically spiralling planet that keeps it anchored in orbit. Their journey, their personal arcs, and their love for each other is what carries you through the series, and all the urban fantasy shenanigans are there to hold that character-driven story up—and it lets you know that from the very first scene. This is a story about love, and also monsters, in that order. For all the flaws I’ve spent years painstakingly pointing out, this is something I deeply appreciate about the Fate story world, and in the end it’s what has me returning to it time and again: not magic, not swordfights, not deep ruminations on heroism (though those are all really cool) but people, and the quiet, grounded stories of the relationships between them.

Tagged as Fate franchise, Kara no Kyoukai, The Garden of Sinners

5 responses to “Love and Also Monsters: The Emotional Priorities of Type-Moon’s Fantasy”