The Trickster Archetype in Pop Culture, Part Two: Better the Devil You Know

In the midst of talking about what Tricksters are, let’s take another brief interlude to talk about what they’re not. Last time I mentioned that Kyuubey isn’t a Trickster just because they’re tricky, and neither are most others who fill the sort of Faustian demon role in their story, and I want to expand on that. However, I also want to look at a couple of demonic (or demon-ish) characters from fiction who do fit the archetype, and explore exactly why. Demons and devils (and fantastical equivalents of these things) can be Tricksters, but it’s not because of their devilishness. Rather, it’s almost in spite of their devilishness, and comes down to a few key points including, once again, their place in the narrative itself. With a spoiler warning for both The Good Place and the recent state of the Black Butler manga, let’s dive in.

Let’s turn to good ol’ Lewis Hyde to explain this: first, there is the basic fact that “The Devil is an agent of evil, but the trickster is amoral, not immoral”. That grey morality (and often self-centred motivation) is a key part of the Trickster, and the fact that they aren’t purely “good” or purely “evil” is what makes them so interesting. Yes, you can look at characters like Loki and say “hey, that was a real dick move my dude, causing the Twilight of the Gods and all” but ultimately he still fits that morally grey sympathetic bastard archetype. After all, he is the God of Mischief—it would be more accurate to call him The Archetypal Little Shit than to say he’s purely “evil”.

A big part of defining Loki is the fact that, for most of the story, he also isn’t a powerful villain but is kind of a stumbling idiot, whose schemes blow up in his face as often as they succeed. He’s an outsider, not an overlord, and that brings us to Hyde’s other defining point: “If trickster were to ever get power, he would stop being a trickster.” 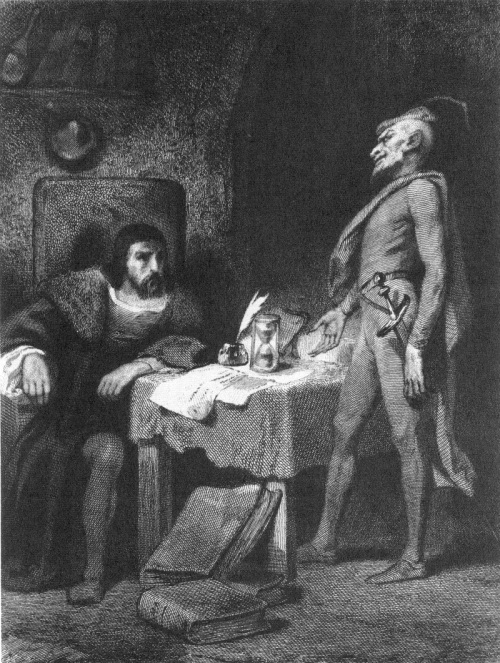 Look at this gnarly dude

Characters with Trickster qualities make for great antagonists, but the idea of Tricksters as capital E Evil is a relatively recent and non-traditional part of the archetype. As with a lot of stuff like this, this is largely due to a shift away from pagan storytelling featuring pantheons of gods and towards structures like Christianity, where there is… generally speaking, less room for grey tones. Trickster characteristics became associated with The Devil and other denizens from Hell, especially manifesting in stories (like the aforementioned Faust) where demons trick and tempt humans. But, as we talked about last time, a key part of Trickster-ness is where they sit in the power structure of the story. If they represent the system of power, if they hold power of their own, and if they’re powerful enough to loom over the story as a fully-fledged villain, they simply can’t be a Trickster.

“If trickster were to ever get power, he would stop being a trickster”—they are most often hungry for social mobility of some kind, but they can either never truly achieve it, or the story must end when they do. And, needless to say, an evil entity who begins the story in a position of power (or representing a position of power, like a demon working for Satan, or a… whatever Kyuubey is, working for their alien lot) also can’t be a Trickster. If Starscream—who still counts at least some of the time, by the way, and I’m going to keep bringing him up—ever actually managed to steal Megatron’s job, a crucial part of his character would dissolve. Going back to one of the (more benevolent) examples from last time, Matilda’s story ends when she successfully gains the agency she’s been fighting for. Tricksters are Tricksters because they exist as outsiders to the dominant power structure in their story, whether that’s the gods or the evil robot hierarchy or an abusive school principal.

Taking all this into account, I can actually think of two fictional demons (or demon equivalents) who fit the Trickster archetype. But what I hope to shed light on today is that they’re not Tricksters because they’re demons. They’re Tricksters because of their characteristics and the role they take in the story, and their position in the narrative relative to the Powers That Be. 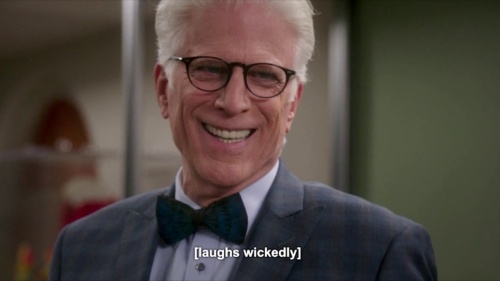 Pictured: an image I ought to use as a reaction more often

First, let’s go to The Good Place. The premise of the series is that a group of characters end up in an afterlife—not necessarily Heaven, but accepted as The Good Place, the one where the Good People go. The twist at the end of the first season is that they are not, in fact, in The Good Place, but in a custom-made Bad Place (again, not necessarily Hell) engineered by the entity named Michael who they thought was their slightly dumb but ultimately benevolent leader. Michael is our tricky-demon figure here: he’s a shapeshifter, with an implied cosmic form beneath his humanoid appearance; he’s clever and manipulative; and he’s in all this for his own gain, hungry for social mobility and eager to win himself a promotion in the afterlife bureaucracy for his innovative method of torment.

He has these Trickster qualities, but to my mind he really slips into the Trickster archetype proper in the second season, when he slips from his position of power. Michael’s schemes get out of his control and he finds himself instead teaming up with the humans he was tormenting in the first part of the story, in an effort to save his own bacon. At first, he is threatened by figures in the power structure and needs to use his cleverness to avoid punishment, but over the course of the season he genuinely comes to love the humans and becomes part of their group.

Michael finds himself outside the power structure two ways, and ends up sliding right into that “selfish culture-hero” role that the Trickster often embodies; especially as he works to undermine the power system and use his trickery to find and manipulate the cracks in it, all in the name of saving himself and his new friends. So Michael, interestingly, goes from a basic interpretation of the Trickster—the tricky nasty devil—to a more mythological version of the Trickster over the course of the story. He becomes, like many of them, a representation of agency and change, of challenge to embedded systems of power and a hero to humans.

My next example harks right on back to Faust, as well as harking back to one of the first series to draw me into fandom and analysis in a serious way. Sebastian, eponymous butler of Black Butler, is a literal demon who has made a Faustian contract with a child who wants to solve his parents’ murder and enact appropriate revenge. Now, Sebastian isn’t a clean-cut mythological Trickster in the sense that Hyde and others might talk about, but he has enough Trickster qualities that I feel like he’s welcome in the discussion. His skillset is supernatural and based largely in deception and manipulation; he’s a shapeshifter (with a pair of glorious high heels spotted in his demon form, adding that element of Trickstery androgyny to boot); he’s a morally grey little shit; and, most importantly, he isn’t in a position of power in the story.

Normally, the Faustian demon is the villain. Black Butler plays with that by not only placing Sebastian in a protagonist role, but by making a recurring point that his human contract-bearer can be just as morally dubious as his demon sidekick. To add to this, it’s become increasingly clear over the course of the series—specifically the manga—that Sebastian and Ciel, for all their meddling in the powers of Hell, are very much the underdogs in their narrative. More powerful beings than they, both in supernatural and political nature, have been looming over them since essentially the first arc, to the point where the current arc has them stripped of their power and on the run from the law.

Sebastian gains that Trickster-ness by his place in the story: he is a grey protagonist rather than an outright villain, and in fact the reader’s sympathy is skewed by the positioning of the characters—and the existence of many who are framed as worse than him—so that Sebastian is almost the hero. Though not in the traditional sense, of course, since his heroism comes from slippery and skillful manoeuvres rather than clean-cut Heroic deeds and strengths. Like Michael, he ends up slipping off the “demonic” route and onto the Trickster track when he becomes invested in helping humans (at least, one human) and ends up in that delightfully contradictory “selfish culture-hero” role.

So it’s all about power: a demon can become a true Trickster rather than just essentially Evil based on their position in the story, the way the story sympathises with them, and to what degree said demon ends up sympathetic to humans. This goes the other way too, of course—if you put Loki in the role of powerful villain, he stops being a Trickster, which is largely why Loki seemed so much more like himself in Thor: Ragnarök than he did in The Avengers (though, again, if we turn to Helena Bassil-Morozow, the MCU Loki is barely even Loki in the first place because he’s not as gross and nasty). To grab from Hyde one last time, “Every group has its edge, its sense of in and out, and trickster is always there” causing a ruckus in some way or another. And oh, we love them for it, even if traditional logic (and/or dominant religious values) says we shouldn’t.

4 responses to “The Trickster Archetype in Pop Culture, Part Two: Better the Devil You Know”