Starscream’s High Heels and the Androgyny of the Trickster 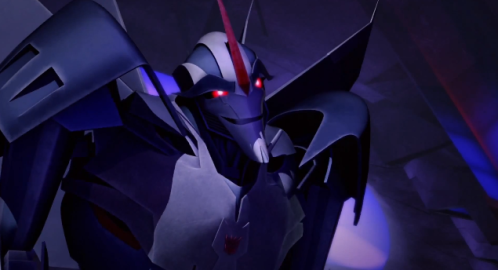 I like Transformers now, and I like Starscream. Who’d have thought? And who’d have thought it would lead me down a tangent about the mythological archetype of the Trickster and the blurring of the gender binary within?

It’s the high heels, is what it is. The Transformers property I’ve grown attached to is the 2011-2013 animated series Transformers Prime, which WB got me into, and in which Starscream is rocking a pair of stilettos built in to his very mechanics. Many of the characters went through a design overhaul for Prime, most notably baddies like Soundwave, who is no longer a walking boombox that you can slot other Decepticons into; and Starscream, who’s now delightfully spindly and spiky compared to his earlier, blockier counterparts, and who now has better-looking legs than me complete with those wonderful heels. To me, this look conveys his character well—one glance at this robot and you can tell he’s bad news, but you can also tell what kind of bad news he is.

Now, looking at Starscream’s lithe, leggy, pointy physique and the duplicitous, cowardly personality that goes with it, we have to take into account the long tradition of designing villains to be visually femme-coded or queer-coded: visibly crossing the usual barriers between “masculinity” and “femininity” as a method of othering them and making them unusual and scary compared to the straight-laced, normative heroes. Think Jafar’s visible eyeliner and more angular, feminine face, or the fact that The Little Mermaid’s Ursula was straight-up modelled on a drag queen. This is something that comes through a little in Prime, especially when you look to bad guys like Knockout, who is as openly camp and smarmy as he is openly evil (though interestingly enough, a more recent comic book incarnation takes this queer-coding of Knockout and his partner in crime and fleshes it out into a canon gay relationship). 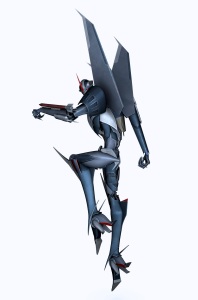 Sure, you can tell Starscream is evil compared to, say, Bumblebee, because Bumblebee is all roundness and smooth lines. Bumblebee is shaped like a friend; Starscream is far to pointy to be huggable. But elements of his design we consider femme-coded like his heels and general spindliness mark him as a distinct Other next to the comparatively stocky, blocky, jock-shaped Autobots as well, and also give him a very different presence to the broad-shouldered, masculine “might is right” figure of Megatron. There’s a degree of blurring traditional expectations of gender presentation at play in Starscream’s aesthetic, is what I’m saying. And yes, this does mark him as a villain in that traditional (and problematic) sense, but for the purpose of this post let’s consider what kind of villain it specifically marks him as: Starscream is a Trickster.

Tricksters are one of the most fun mythological archetypes out there: they’re slippery figures who present a very different type of story to those starring strong and noble Heroes, full of riddles, shapeshifting, and a grey morality and way of not always quite getting what they want that makes them interesting and unpredictable. Tricksters are generally shapeshifters, but usually default back to male form at the end of the day—most people cite Scheherazade, the narrator from One Thousand and One Arabian Nights who preserves her life with the power of cliffhanger endings, as one of the few famous examples of a female Trickster. The ones that otherwise spring to mind are generally your Norse Lokis, your African Anansis, and your Classical Mercury/Hermes, notably all recorded as dudes, but notably all possessing a certain narrative gender-fluidity. Or at least the ability to flaunt and blur the lines between traditional gender roles is part of their character and, in many of their modern incarnations, part of their character design.

Helen Lock suggests in the paper Transformations of the Trickster that part of the Trickster’s nature is that they’re a liminal figure—not quite belonging anywhere in particular, and not quite easy to categorise. This comes through in various ways, most obviously the shapeshifting abilities which render them difficult to define as any one thing in particular. It’s here that their sense of androgyny comes through most—after all, if someone can change forms at will, how can you tell what gender they “really” are? 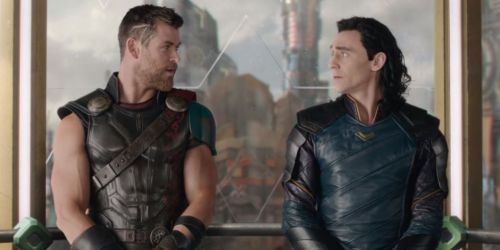 Loki’s a very neat example of the literal gender-binary-blurring of the Trickster. As well as transforming into various animals, Loki also presents as a woman occasionally if a trick demands it, and in one famous case, does both, shifting into a female horse and becoming the mother of a magical beast. As Lock notes, storytellers usually default back to “he/him” for the god of mischief once the shapeshifting is done (D.A. McNeely also calls Tricksters “an androgynous archetype portrayed universally as masculine”), but Marvel Comics have picked up on these aspects and rendered some versions of Loki officially gender-fluid.

This has yet to happen in the Cinematic Universe (but hey, it took them over a decade to consider making a movie about a cis woman, so waiting for something like that will be watching the path of a glacier), but a quick glance will reveal those same gender-blurring visual codes in his character design. Thor? Thor is clearly the good guy, the straightforward one, with all those expected markers of heroic masculinity: the golden hair, the beefy body, the fighting with weapons. Loki? Loki is nowhere near as muscular and looks practically slinky next to Thor, and angular and pointy to boot. He doesn’t need to be buff because his weapon is words. And those are tricky things to pin down, much less straightforward than a hammer or a sword.

You see this visual coding at play in American Gods, too: not that any of the characters are particularly heroic, but the spider god Anansi still stands out as being of a different class to the “my fists/weapons do the talking” members of the group like Czernobog. He’s slim and spindly, poetic and silver-tongued as Tricksters ought to be, and very dapper, implying pride and preening that can quickly cross over into feminine or camp coding. Once you start looking for it, you’ll notice this everywhere, even outside the realm of fantasy—think sly conmen with slick suits and slight builds, the contrasting designs of every “brain and brawn” pair-up ever, and hell, even the conception of cats as tricky and evil next to the stalwart simplicity of big dogs. Not all of them have built-in robot high heels, but it’s there. 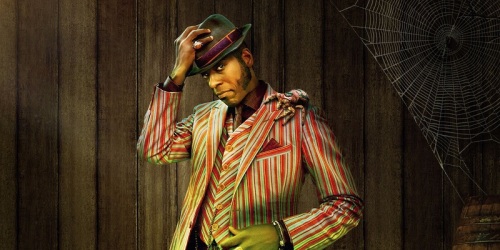 The Trickster is coded as an Other because the Trickster, in Lock’s words, is defined by their existence in-between—men who use the “woman’s weapon” of speech and cleverness, able to change forms at will so you can’t tell what they “really” are, and social outliers in some significant way that instils enough spite to fuel that characteristic cunning. But that Otherness, that liminal place between good and bad and that Chaotic Neutral thirst for self-success, is what makes the Trickster such a fascinating and fun archetype… all of which Starscream plays into perfectly in his Prime incarnation, which made him, entirely against my better judgement, my favourite character in the show. He’s got the conniving plans, the power of speech, the drive for social mobility and power… and in the end, the delightful mess of character flaws that mean he often fails. He’s also got the shapeshifting abilities, which I’m including as a point even though it’s a given, him being a Transformer.

Is he a plane? Is he a robot? Who’s side is he really on? He’s rooted in ambiguity, which makes him interesting to watch. Am I rooting for him to succeed? Not necessarily, but I find myself mesmerised watching the dastardly fellow the same way I was mesmerised reading the Loki myths. The Trickster is a character type we’ve been fascinated with as long as we’ve been telling stories. As much as it’s presented as something strange and outlandish and not to be trusted, I think we all connect to that in-betweenness in our own ways, and enjoy living vicariously through these characters who take it to the extreme… and who can, perhaps, present that Otherness much more openly than we can.

Self-motivated as they are, Tricksters live in a morally grey space not devoted to the usual rules of society, which opens up all sorts of possibilities. That this openness and fluidity is so heavily associated with outliers and moral dubiousness is unfortunate, but hey, no one said we have to relate to the Heroes all the time. They’re never the “good” characters, but they’re always the best characters. It takes all sorts to make a story, and it often takes a Trickster to tear the walls down in one way or another.