A Place Further Than the Universe #9 and #10: Friends and Loved Ones

We still don’t know who Shirase’s dad is. A Place Further Than the Universe seems infinitely less bothered with such banal biological technicalities than it is with setting Gin up as Shirase’s other parent. At this point, I think I’m going to shrug off my curiosity in favour of a metaphorical/mythological explanation that Takako made her daughter with her one true love, which is, of course, the concept of Adventure itself. Takako seems to radiate so much whimsy and power that it could be possible, and this explanation lets us dive in and focus on the relationships that the series clearly thinks are much more important. Because it’s all about relationships again this time around: the heartache and awkwardness of past ones, and the beautiful strangeness of trying to take new ones into the future.

In episode nine, Universe gives us its first prominent male character… and he’s two-dimensional, the butt of jokes, and ends up only serving to further the plotlines of the women around him. He also introduces the first real focus on romantic love (thus far the series has been focussed on platonic and familial love instead) by declaring that he has a crush on Captain Gin, and asking Shirase for advice. As I said, the wayward affections of this poor stupid guy end up as little more than a catalyst for exploring the relationships between the main female characters, specifically the complicated one that exists between Gin, Shirase, and the memory of Takako.

Partially wanting to help their lovelorn crew member out, partially because they think it would make for Good Content that will boost their dwindling blog activity, Yuzu, Hinata, and Mari go to interview Gin about her love life. Shirase hangs behind, not yet willing to breach the weirdness and awkwardness that’s going on between her and her mother’s old crewmate. This upsets Kanae as much as it upsets the girls, who also wanted to push the estranged people who were once closest to Takako back together. 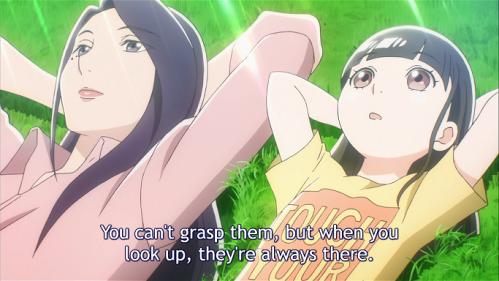 So, Gin is interviewed about her love life and it leads into a series of flashbacks about Takako. This is… I mean, this is a love story. Surely. The words haven’t been said, but as we must remember, “text without kissing” does not necessarily mean “subtext”. In any case, the closeness and admiration between Gin and Takako leaves Gin and Shirase in a very strange emotional spot that reminds me in a few ways of Pearl and Steven in Steven Universe (Pearl, of course, having been in love with Steven’s mother, who is dead in the present of the show). When Shirase was little, Takako would routinely leave Gin to babysit her in the hopes that the two would overcome their mutual awkwardness and become close. Gin clearly has no concept of how to communicate with a child, and Shirase has no concept of how to communicate with Gin, but the two are able to bond over a mutual love of penguins. In a sweet parallel, penguins are what bring them back together in the present, when the ship arrives at Antarctica proper and they spot their first fluffy ice-bird from the deck.

I sort of wish I hadn’t used up the “breaking the ice” wordplay in episode three and four’s post, because that is very much what’s going on here—literally and figuratively. As the ship gears up to smash through the ice in its path, Shirase and Gin finally have a conversation about their feelings. Shirase is at first practically polite and nonplussed, saying of course she doesn’t blame Gin for her mother not coming home—they all knew and accepted the risks, it was part of the job. But when pressed if this logical response is how she really feels, Shirase breaks down and admits that she doesn’t know, revealing the horrible, confusing open wound that is her grief.

Defying logic, in her heart she’s been waiting for her mother to come home all these years. Gin doesn’t say as much, but flashbacks tell the story again when we see her staring into the blizzard that claimed Takako, hearing her voice one last time over the radio, saying how beautiful it was out there. They’re fitting last words that cement everything we know about the absent character that’s driving the plot of the show, and the hope and light they contain helps us understand why everyone is so drawn to her, even if it means chasing stars or reaching for clouds. 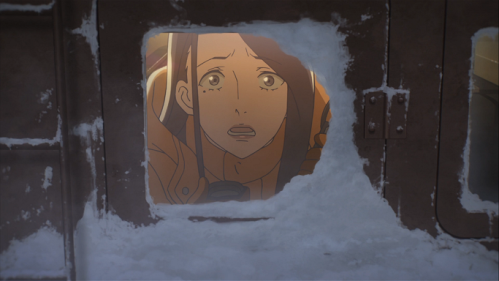 But as I said last time, it’s clear that Takako is still “here” for these women, closer than ever before now that they’ve reached Antarctica—we even see a shot of her cheering “Get ‘em!” when the ship is working to break through the ice, evidently full of hope and encouragement even from beyond the grave. We can reasonably assume that she joins in the shouts of “In your face!” from the crew too, started by Shirase when she finally sets foot on the snow with her friends, and is finally able to prove all her naysayers wrong. The yelling, combined with her crying from before, makes for one hell of a cathartic release. The kids are in Antarctica! They really did it!!

Following what seems to be the show’s established pattern of “one episode that focusses on Takako and absolutely wrenches your heart out, followed by a slightly more light-hearted one to help you recover”, episode ten is about setting up domestic life at the base, and about Yuzu. Amidst the organised chaos of the move into their new Antarctic home, Yuzu learns that an audition she took before leaving was successful, and she’s going to be taking a role in a drama TV show. Perhaps ironically, given her miserable history with platonic relationships, she’s been cast in the role of the main character’s best friend. Yuzu’s first anxiety is that once she starts filming, she and the rest of the gang won’t be able to spend as much time together—to the point where she panics and reaches for the only thing her stifled, child-celebrity life has let her understand, and asks the gang to sign a Friendship Contract promising that they’ll still like each other.

Mari and the others find this ridiculous, but spend the rest of the episode trying to figure out exactly how to explain why, and how to explain what friendship really is. They can only come up with vague answers: Shirase is basically useless given how Mari is one of the first proper friends she’s ever had in a school career filled with grief and teasing, and Hinata tries to get philosophical but still flounders when trying to get her point across. It makes you realise that such a wonderful but nebulous thing as “friendship” can’t really be summed up with a simple definition or some contract fine print—each is so individual and so based on personal feelings, and, as we saw with Gin and Takako’s backstory in the previous episode, showing is much more effective than telling when it comes to demonstrating love.

It’s Mari, of course, who saves the day with actions rather than words, setting up a haphazard but heartfelt birthday party for Yuzu, having remembered that her actual birthday took place while they were all seasick. Yuzu bursts into tears just like she did when the gang showed up to accept her in episode three, and my heart is warmed after being broken (again). Painful as this was, it was nice to have some focus back on Yuzu, whose role has mostly been Team Mum and being disgruntled with Mari’s sleep-talking shenanigans for the past couple of episodes. It goes to show, one adorable montage alone cannot overwrite a lifetime of insecurities. But that’s okay, because her newfound friends—whether or not they gathered as a committee and agreed they were all friends—are still here, and the four have come so far together. It’s hard not to be proud of them, just as it’s hard not to share in their emotional turmoil, be it about friends or loved ones.

Universe continues to a poignant emotional rollercoaster. It’s hard to believe that there are only a few episodes to go. I can only assume that the arrival in Antarctica—the place further than the universe itself—heralds a condensed and heart-aching emotional climax, hopefully followed by the catharsis, humour and closure that this show does so well.

Episode ten sees Kanae and Gin raising a toast to the icy wilderness, gently letting Takako know that they’ve come back; while the parallel next generation bundle around Yuzu to uplift each other in their impromptu celebration. There’s heartbreak to be found here, but there’s also healing—this is a story about a bunch of kids and a ragtag crew of civilian explorers trying to get to Antarctica, sure, but first and foremost it’s a story about love.

3 responses to “A Place Further Than the Universe #9 and #10: Friends and Loved Ones”