A Place Further Than the Universe #5 and #6: It’s Complicated

Not so long ago, the dream to travel to Antarctica was an abstract thing… but now that dream is becoming reality, with all the bizarre, wonderful, stressful experiences that come with it. In episodes five and six the gang get caught up in the mundane but dizzying whirl of packing, plane flights, hotels, new places, bureaucratic travel dramas, and, most importantly for this post, saying goodbye to the old friends they’re leaving behind and learning to live with the new friends they’re taking with them.

These episodes focus on one thus-far-less-explored relationship each: first, Mari and her childhood friend (and resident Voice of Reason in her plans to “live her best youth”) Megumi, and then new travel buddies Shirase and Hinata. Each pair has their own unique clash, giving us two delightfully and three-dimensionally complicated friendships. This show has The Power of Friendship at its heart, but that doesn’t mean that said friendships are always wholly positive and conflict-free. It’s refreshing to see and engaging to watch, even if these have been by far the most stress-inducing episodes of the series.

So far, the spotlight’s been on Mari’s quest for adventure, but this time it subtly shifts to point out the girl who’s getting left behind. The ending of episode four left me decidedly worried about Megumi—the domestic, non-magical equivalent of The Ordinary Friend who initially guides the hero but is inevitably left behind once they answer the call to adventure. Being shafted into this role would, understandably, leave one with some feelings of heartache and resentment. In Megumi’s case, one emotion seems to fuel the other, and focussing on her reveals a bubble of passive-aggression that’s been building presumably for months. Mari, either oblivious or overly optimistic (or both) makes no move to pop this bubble, and so it continues to swell and surge for the entirety of the episode, with little bits of nastiness leaking out the longer it sits between the two old friends.

Megumi “accidentally” unplugs a video game that Mari’s beating her at. Megumi casually informs Mari that “someone” has been spreading mean rumours about the Antarctica squad when Mari is happily talking about her new friends. She finds a way to quietly knock Mari down whenever she’s excited about a personal success or an Antarctica-based plan or… well, anything that isn’t Megumi-related. Interestingly, Megumi chickens out and backs down when Shirase and Hinata actually show up, retreating into herself when the currently-weird power dynamic between her and Mari is interrupted. Because as Megumi is forced to realise and admit, there is currently a weird power dynamic between her and Mari.

Flashbacks and musings tell us that they’ve been side-by-side since early childhood, with Mari being enthusiastic but hopeless and Megumi taking on a sensible, nurturing and mentorly mode that’s likened to an older sister (despite her and Mari being the same age). This is the same dynamic they have at age sixteen, presumably locked in a sort of accepted stasis for ten or so years. With such strong and long-lasting foundations to their relationship, it’s no wonder Megumi felt a tectonic shift when Mari started doing things—big things!—independently of her. Megumi is the gently exasperated voice of reason to Mari’s zany antics, she always has been… so what happens to her identity when the other half of this duo no longer needs her?

It’s tough, when long-lasting friendships shift and drift, but a heartbreaking inevitability of high school. People change, situations change, and at the risk of a cliché, things just aren’t as simple as they were when you were little. And so this enduring friendship briefly becomes something twisted, with Megumi turning to underhanded bullying and scheming against her supposed best friend. It’s awful, but the extra awful thing is that it’s something quite true to life, and utterly gut-wrenching to watch happen. The extra extra awful thing about it is that Megumi knows what an asshole she’s been, and comes to tearily and angrily confess it all to Mari literally moments before she leaves for her trip.

She proposes a clean break, for them to go their separate ways: Mari is growing up and moving on, after all, so Megumi should try to grow too instead of being petty about getting left behind. Maybe for the two of them to grow up, they have to grow apart. It’s heartbreaking but again, accurate to life. Some friendships, much as they may define us, cannot last. But before their shared cry-fest is over, the ever-heartfelt Mari leaps forward and gives Megumi a hug, rejecting the “break up”. So whether or not the childhood friends truly can weather this storm remains to be seen, but their story isn’t over yet. I have the feeling that being apart from each other for a few months, finding new ways to define themselves apart from “Mari’s big sister” and “Megumi’s useless friend”, will be healthy for both of them in the long run.

With the bubble finally burst between the two old friends (nicely tying into that recurring motif of the leaf leaving its pond in a rush of water), we can all breathe a sigh of relief and move onto… the next complicated relationship, Hinata and Shirase. They’ve had a couple of little scenes together, but their one-on-one dynamic hasn’t gotten nearly as much focus as Shirase’s and Mari’s. It also becomes obvious (a little disconcertingly so) that we don’t know that much about Hinata, compared to Mari’s main character status and the way previous episodes have bared Yuzuki and Shirase’s souls (and backstories). What we do know is that she has a streak of stubborn optimism that’s almost as powerful as Shirase’s stubborn spite, which rears its head in episode six when she loses her passport after they fly to Singapore.

I understand Hinata’s “it’ll be fine!” attitude, just as well as I understand how hair-tearingly frustrating it can be. She doesn’t want to ruin the gang’s touristy fun around Singapore (which is lovingly and beautifully rendered, by the way), or have anyone make a fuss over her, and I think part of her sincerely believes in that weird panic-logic that if she keeps checking her bag maybe this time the lost thing will show up. But reality ensues, with Yuzuki seeing through her optimistic ruse and calling her out on it without batting an eyelid, and the girls are faced with disaster. With no passport, Hinata can’t get on another plane, which means she can neither continue to Australia nor return to Japan. There’s nothing that takes the shine off “adventure” like travel problems. 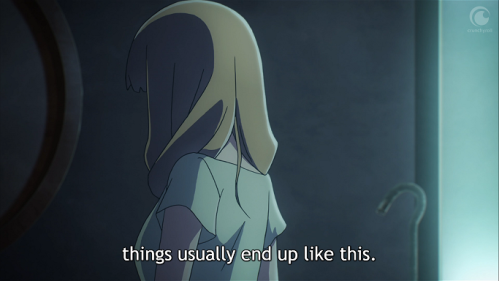 Hinata’s next logical “it’ll be fine” step is to say that the gang should leave without her, and she’ll figure out a new passport when the embassy opens and catch up to them. Logistics be damned, she’ll worry about them when she gets there. She doesn’t want to be a drag, and she certainly doesn’t want to endanger Shirase’s goal of getting to Antarctica. Interestingly, it’s Shirase that she has the biggest clash with over the issue. Shirase, for all her worry about missing the boat, doesn’t want to leave Hinata in a strange country all on her own. Hinata responds that she doesn’t like it when people are considerate of her, which is… an intriguing and worrying new insight into her character, in a scene that implies a deeper melancholy than when she simply waves a hand and says she doesn’t want anyone to make a fuss. She appears more withdrawn and vulnerable than we’ve ever seen her, even if, of course, she’s still wearing that signature smile.

Whether she likes it or not, though, she has three friends who are dreadfully considerate of her, and this starts a genuine argument when they try to move their plane tickets. Shirase even pulls out the famous packet of cash that started this whole adventure in the first place, to buy a whole new set of seats so the four can travel together once Hinata has her passport. The two brands of stubbornness collide, and Shirase ends up yelling at her that she refuses to budge—the four of them are going to Antarctica, that is her priority.

This is, of course, a very different “priority” than she had at the start—Shirase’s friends are now part of her goal, with compassion and companionship motivating her alongside (and maybe more than?) lonely spite. It’s enough to take Hinata by surprise and move her to tears, and it’s enough to get the girls four new tickets—business class!—so they can wait in Singapore together for a few more days until Hinata can get a new passport. No explorer left behind.

Aaaaaand then of course it’s revealed that Hinata’s passport was in Shirase’s bag the whole time. Shirase damn near screams, and admittedly I nearly did the same.

Clashing personalities, deep histories, and big changes—it’s all happening, to a rapidly changing backdrop as the gang gets closer, step by step, to their destination. I’m holding out hope for some glimpses of Western Australia that are as lovely as the show’s rendition of Singapore, and then as I can figure it the girls will be on their ship and heading for the ice. Home, and childhood, have well and truly been left behind—including the relationships that defined it. Mari and Megumi are no longer joined at the hip, and whatever happened to Hinata to shape her view of relationships and drive her away from school is also a thing of the past (here’s hoping we get some more insight on it sometime soon, even as we move onto more positive things). Motivations have shifted as relationships have changed (for better or worse, or a weird mix of both) but Antarctica still looms as the big symbolic horizon that all these characters are heading for, though each is on their own individual journey.

4 responses to “A Place Further Than the Universe #5 and #6: It’s Complicated”