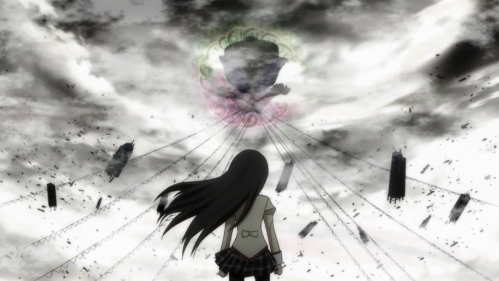 Remember that Ancient Aliens show that hinged on the theory that beings from outer space are responsible for the development of human society? Is that still being made? As of this week’s episode, Madoka Magica has been revealed to run on similar logic, subscribing to the suggestion that the sci-fi creatures at the heart of the series have been integrated into humanity since it’s earliest days, retroactively attributing big moments in history to said creatures. In this way, Madoka is in the same category as the Michael Bay Transformers movies. I’m not really sure what to do with this information. I kind of hate it.

Anyway, the show wastes no time throwing both of its remaining heroes into existential dread. Kyuubey has figured out that Homura is from a different timeline, and has been repeatedly redoing the same month in accordance with her wish. This is not just narrated confirmation of what we saw in the previous episode, though, since it puts that information together with one of the biggest questions resting at the heart of the series: that of Madoka’s off-the-charts magical potential. Kyuubey speculates—to Homura’s face, naturally—that it’s precisely because Madoka is the motivation for all of Homura’s timeline-hopping. The universe has been altered so many times because of this one girl that it’s effectively sat up and paid her attention, an otherwise ordinary human gifted such great significance that she’s become imbued with universe-altering powers herself.

Kyuubey’s explanation is part sci-fi language and part mysticism, all a smokescreen for the fact that the force at play is literally The Power of Friendship. On one hand, it’s kind of neat to incorporate such a traditional magical girl staple into the narrative with solid, scientific reasons—creating a scenario where it’s entirely logistical that one person’s feelings for another could alter the universe. They have, in many ways, created their own destiny. On the other, oh, what a kick to the guts of that wholesome concept it is. Homura’s dedication to saving Madoka has doomed her, and the world—Homura’s love for Madoka has granted her immeasurable power should she become a magical girl, which will transfer into immeasurable disaster when she inevitably becomes a Witch.

Kyuubey’s face, as always, does not change, but the camera cleverly warps it to horrifying angles. Because Kyuubey, of course, is delighted with this news—a transformation of that magnitude would fill their energy quota for this planet and conveniently destroy it in the process, meaning that their race’s work on Earth is pretty much sorted. So Homura’s done them a big favour, really!!

We get even more logical dread-mongering from Kyuubey when focus shifts to Madoka, who has just come home from Sayaka’s funeral. Her body was found in a hotel room—presumably the one where Kyoko was stowing it for safekeeping, before she died as well—but with no physical damage to the corpse, the police are somewhat baffled as to the cause of death. Madoka stands in a faceless crowd, the only one bearing the cold and crushing burden of the truth, then returns home to a hall crowded conspicuously with empty chairs, repeating that motif from episode nine and ominously hammering home that to walk among magical girls is to walk in the land of the dead.

Kyuubey does not flinch under Madoka’s accusations; in fact they retort that she’s reacting irrationally, and urge her to see the bigger picture. Also as discussed in episode nine, Kyuubey’s sense of “the big picture” is so big that it’s incomprehensible and thus inhuman. But they take things a step further this time, getting inside Madoka’s mind and giving her a history lesson. Kyuubey’s race came to Earth thousands of years ago, see, and upon discovering the strange phenomenon that is “emotion” (something considered a mental sickness on Kyuubey’s planet, go figure) and deciding it could be useful to farm energy, influenced and raised the lowly creatures they found up into civilised human beings. All throughout history, girls have been making contracts with Kyuubey, including, allegedly, some quite famous figures (Madoka’s “Joan of Arc was a magical girl” versus Michael Bay’s “King Arthur was real and he met the Transformers”—choose your fighter). 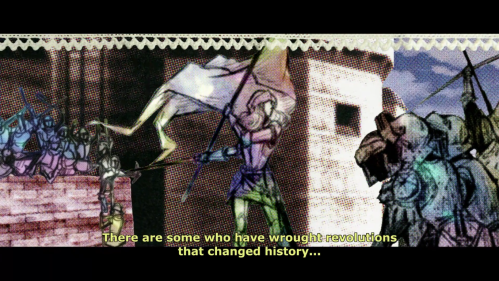 Did you know that Kyuubey invented Empowered Women?

This alternate history where the world-altering achievements of young women are all implied to be inextricably linked to Kyuubey is… interesting. It’s a bit of storytelling fun, of course, a game of “what if?”s that draws on conspiracy theories a la Ancient Aliens, which are attractive in the first place because we don’t want to believe we’re alone in the universe. But conspiracy theories a la Ancient Aliens also run primarily on the notion that plain old humans—especially ancient, “primitive” humans—couldn’t possible achieve any of the amazing things that have occurred throughout history on their own. Obviously, we needed alien intervention, otherwise, as Kyuubey says, we’d still be running around naked in caves.

Suggestions that aliens built the pyramids become prickly when you take them with the implication that “primitive” African societies couldn’t possibly have been smart enough to complete such a feat of structural ingenuity. Likewise, this aspect of Madoka’s worldbuilding comes with the prickly implication that all these young women alluded to couldn’t possibly have changed the world on ambition and personal strength alone. They must have needed a magical contract with Kyuubey, and must have truly been pawns to a greater scheme all along—an idea that diminishes their achievements twofold. While “Cleopatra was a magical girl” is a fun concept (something the Defenders of the Faith project is playing around with, for example, but without the prickliness), in this case it comes with a brand of historical revisionism that I’m not fond of, and raises far more questions than it answers.

In any case, Kyuubey’s effort to make Madoka see The Big Picture backfires, since Madoka’s instead horrified by the extent of suffering that they’ve caused (yes, even when Kyuubey explains that they treat humans way better than humans treat livestock—ungrateful girl!). She further defies the cold logic of their system by going to visit Homura and offer her help. Homura is forced to explain Walpurgisnacht due to her research on it (her?) being displayed all over the walls, but she’s all too ready to throw up the bluff that she can fight the mega-Witch on her own. Madoka sees through it and worries, even though she wants to believe Homura’s that strong… and this display of sincerity is all too much for Homura, who drops all cynical, standoffish bravado and dives forward to give the girl at the centre of her universe a hug. 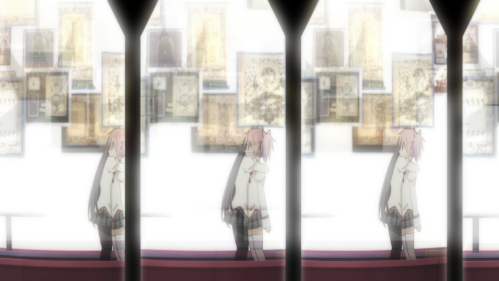 How many timelines do you think it’s been since Homura had a decent hug?

In the end, it all comes down to these two—they’re the only two characters left, of course, but theirs is also the relationship that has defined the series, whether we knew it from the start or not. Homura finally breaks down and reveals all to Madoka, sobbing about how she’s been fighting to save her all this time, about how in each timeline they move further apart, about how she’s going to keep trying to protect her even if Madoka has no idea who she is. She apologises for probably not making a lot of sense, but begs Madoka to let her take care of things even so.

Madoka is quite rightly baffled by all this, but doesn’t say much. She’s quiet and withdrawn all of the next day, when a storm—cloaking Walpurgisnacht—rolls into town and she and her family are evacuated. At last we see the monster up close, in all her strange, enchanting, and eerie glory; and at last we see Homura’s plans in motion, the culmination of her ultimate quest to defeat this thing on her own. Remember how she robbed the mob last episode? This time I can only assume she robbed the military, since she has a ridiculous amount of missiles and explosives at her disposal, nicely paired with her time magic. But will it be enough to take Walpurgisnacht down? It’s certainly a hell of a show, even though it soon becomes clear that Homura isn’t winning.

Madoka contemplates this with Kyuubey at the evacuation shelter, and Kyuubey, who no longer sees any point in mincing words with this girl, shrugs that Homura doesn’t really have a chance of beating the mega-Witch. But she’s sure as hell going to try, since she hasn’t yet given up hope. It’s something in these words that seems to switch Madoka into action, and she sets off to leave. Only to be stopped by her mother. Who we know is terribly worried about her after seeing a snippet of conversation between her and Madoka’s teacher (anime teachers, having meaningful relationships with other women their own age instead of just being the butt of Christmas Cake jokes? My God!)… where they drank at a bar which, in an interesting décor choice, featured a massive print of religious art, specifically depicting creation myth. It’s a bit ironic given that we’ve just learnt that humans have Kyuubey’s race to thank for their humanity (great, Kyuubey also debunked religion), but also an intriguing bit of foreshadowing that is very obvious on the rewatch and very confusing the first time.

How many timelines has it been since someone held Homura’s hand??

This is the last interaction we’re going to get between Madoka and her mum, and at the risk of being repetitive, Madoka’s relationship with her mum is good. As painful as it is in the moment, it’s kind of nice to see that their dynamic is capable of being strained and is not, in fact, perfect all the time, allowing both women to be complicated and layered and capable of doing the wrong thing. Mama Kaname unconditionally loves and supports her daughter, for sure, but not to a level of blinded, plot-convenient complacency. Just because she comes to believe that Madoka’s making the right choice, doesn’t mean she isn’t torn up about letting her go or being left out of her life. But she does let her go, because she trusts her, and it’s trust the audience has watched in motion in previous episodes, and thus feels believable and heartbreaking rather than an easy out to keep the story moving (in the way that the absence of parents is also an easy way of keeping the story moving).

Oh, I feel so damned bad for Mama Kaname. But the focus must again shift to Homura and Madoka, who find themselves together in the rubble of a Witch-racked city once again… though in different circumstances. As Homura realises that she’s losing the battle, she automatically moves to reset the timeline, to start all over again as she has done we-don’t-know-how-many times… but then realises that creating another timeline will only tighten the chains around Madoka, and doom her to even more suffering. As she comes to terms with the fact that all her efforts have been in vain, her Soul Gem starts to cloud over—just one more notch in the great system, repeating the pattern of hope and despair. But who should appear, in the role of her saviour this time, but Madoka?

The episode ends on the dreadfully ominous note of Madoka happily apologising, with the implication hanging in the air that she’s made a contract with Kyuubey and fallen into the cycle herself. But hold your breath ‘til next episode.