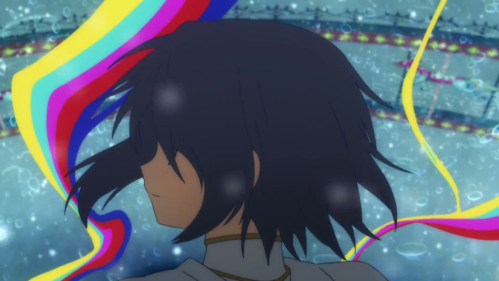 Thought: does the magical girl genre exist in the world of Madoka Magica? We can assume that anime does, given that Sayaka references anime tropes when she’s joking around in the first episode, but apart from that the only media we’ve seen the characters interact with is music (both pop and classical). Do the characters in-universe have any concept of what a “magical girl” is before they meet one/become one? It’s not entirely clear. Which is odd, in a way, since having pop culture set a precedent that real life does not match up to would lend a degree of social commentary—in a “television is not preparing our children for the harshness of reality” sort of way—to the series. After all, if you’re going to take familiar tropes apart (and here, clearly the subversion of familiar tropes is for the benefit of the genre-aware audience, rather than the characters themselves) you may as well use that process to make some sort of point.

Maybe it’s too early to be diving into that sort of discussion. It’s just something that blipped across my mind while I wondered where exactly this ideal image of a magical girl that Mami worked so hard to display, and her friends admired so much, came from. Are they taking cues from media? From history, perhaps, given that Kyuubey’s been making contracts since early human civilisation? From a logical combination of society’s ideal visions of femininity and society’s ideal vision of selfless heroism? The fact that Madoka’s setting seems to be some sort of deliberately ambiguous, slightly sci-fi, and architecturally stunning Anyplace isn’t helping. Do these characters exist in a bubble, a world vaguely recognisable as our own but effectively just a grand and beautifully-designed stage for this story to play out that’s isolated from any conception of actual society as we in the real world know it??

God. Anyway. This week we’re dealing with the wake of Mami’s untimely death, and everything is the worst.

Grief, low self-esteem, and magic are a heady combination

The episode opens with Sayaka going to visit Violin Boy, only to find that he’s busy doing physical therapy. The suspicions built up last time are confirmed: he was a violin prodigy who got into some sort of accident (vehicular, we can assume) and has sustained enough damage that he has to effectively learn how to walk again. Even if he manages that, he probably won’t get his fine motor skills back, meaning he’ll never be able to play his beloved violin. This information is all relayed to the audience via a pair of chatting nurses, who also remark that they “hope [Sayaka] will become the encouragement he needs to get better”. Because if modern medicine can’t cure physical injuries, the emotional labour of women can, I guess? No pressure or anything.

We’re not sure whether Sayaka overhears this or if she’s just already in a state of self-loathing, but she leaves the hospital looking completely depressed, cycling back through her now-familiar “I’m a horrible person because I’m okay while bad things have happened to somebody else” thought pattern. When we next see her at school, however, she’s glossed over her anguish over Violin Boy and her grief over Mami to go back to being her usual bubbly self, maybe even moreso than usual. You wouldn’t even know anything was wrong. Her skill with pretending Everything Is Fine is so finely-honed it’s heartbreaking.

Madoka wears her heart more on her sleeve. She starts crying over breakfast, and when her family asks what’s wrong she deflects their worry and says she’s crying because she’s happy she’s alive to eat her dad’s delicious cooking. If Sayaka’s response is to beat herself up internally, Madoka’s is to continuously apologise… for being “too weak” to help Mami, for not wanting to rush into life-threatening danger and become a magical girl. If someone told her to stop apologising, she would probably instantly say “sorry”. Both girls’ reactions are grossly unfair given the circumstances—i.e. none of this was their fault—but both painfully realistic and relatable. Their only solace in this topsy-turvy emotional state is that they can share the secret, though that only makes them more distraught that the world is going on as normal completely unaware that Mami died. 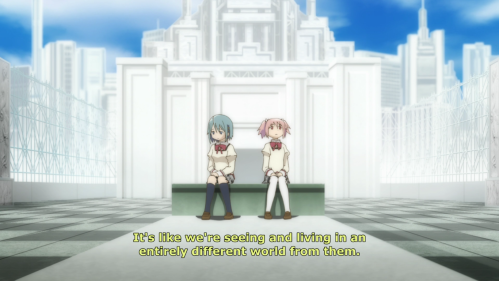 Sayaka takes a practical moment to ask Kyuubey what’s going to happen now that Mami isn’t around to protect the city from Witches. Kyuubey simply responds that other magical girls will probably move into the territory and take it over, which makes Sayaka wrinkle her nose—after all, these girls will only be after Grief Seeds for their own gain, and surely can’t be as true and heroic as Mami was. Kyuubey delivers a precision strike to Sayaka’s emotional complex by stating that the only people fit to judge them are their fellow magical girls, “those that share the same burden”… and then makes to flit away to find “girls who are in greater need”. Thanks, Satan.

The final straw to break Sayaka’s back is Violin Boy himself, who she visits later in the day (successful this time) with that cheery façade painted right on. The boy of her dreams delivers perhaps an even more precise precision strike to her emotional complex by asking if Sayaka is trying to torture him. Sayaka is naturally horrified to hear this accusation, but Violin Boy talks over her and uses her as the dartboard for all of his frustrations—he’s never going to move his hand again, so why does she keep bringing him music that he can never play? He flies into a rage, hurts himself, and leaves her floundering trying to put everything back together.

If I could hunt down those nurses from the start of the episode I would point them at this scene and say listen, this is what happens when you place impossible responsibility on one young girl’s emotional efforts. If the staff truly have given up on VB’s recovery and are placing their hope on Sayaka’s ability to “encourage him to get better”, then of course this kind of hateful backfire is going to happen when she can’t—if she is meant to be the source of all his hope, then she’s going to take all the blame when it doesn’t work. There’s a neat message here about the pressure women are put under (this is not to say that men don’t also get caught in these situations, but as it’s a gendered in context, let’s discuss it as representative of that) to be the emotional rocks in the lives of the people around them, even at the expense of their own feelings—and how this mindset is embedded in them from such a young age, with all this monstrous pressure put on the fourteen-year-old Sayaka, training her to base her self-worth on her ability to make other people happy before she even has a chance to consider that it might be unfair on her.

Sayaka tries to calm VB down, but he, conveniently, yells back that only magic and miracles could cure him now. And who should appear in the window at that exact moment? 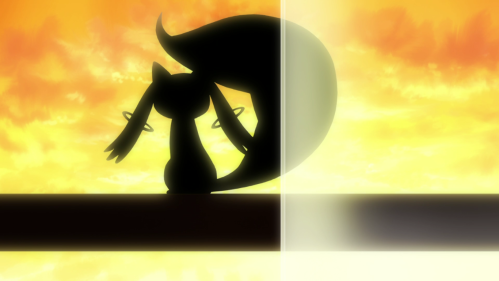 I SEE YOU, VILLAIN. I SEE YOU

The only one being vaguely supportive is, to everyone’s surprise, Homura, who meets Madoka outside Mami’s now-abandoned apartment and attempts to offer her some solace. She’s doing pretty well, pointing out that Madoka shouldn’t blame herself for what happened, and that it’s not selfish to try and protect herself. She… loses her comforting edge the further the conversation goes, finishing with her usual cryptic menace and leaving Madoka practically trembling on the pavement, but hey, she tried. She also dropped some lovely lines that make a lot more sense on the rewatch, including muttering that she’s envious of Mami when Madoka promises never to forget her.

You’d think she’d be more eager to reach out to the girl who launched a thousand timeloops, but I guess it’s difficult when you’ve probably had this same conversation five times already and are just so exhausted and disgruntled with the whole thing that, like a customer service employee, you know what you’re doing is important but by God you just want to go home. There is no rest for Homura though. Luckily, whether she knows it or not, Madoka still hasn’t given up on her, who is still thinking kindly of her when she walks home (even after that dramatique and foreboding exit).

Things only get worse for poor Madoka when she spots her friend Hitomi on her way home, who is at last fulfilling her role as The Ordinary Friend by being kidnapped by the monster of the week. Hitomi, and a group of other bystanders, have all been hypnotised by a Witch and are heading zombie-style to some sort of abandoned warehouse, murmuring self-hatred and lines straight out of a suicide cult. Madoka, horrified, and feeling useless in her magic-less state once again, does what she can to help by throwing the bucket of deadly chemicals they’re playing with out the window. For a terrible few seconds, she’s framed by shards of glass eerily reminiscent of the Witch’s teeth that framed Mami right before she died.

I wonder if animated characters are physically aware when they shift art style?

I’d just like to point out that this whole sequence is creepy as hell, and Madoka has every right to be a terrified mess. Frankly, I’m very impressed with her for taking initiative and trying to save the hypnotised people and herself, and found myself genuinely stressed out watching her. Hiding from the zombie-folk, she finds herself out of the frying pan and into the fire when she runs headfirst into the Witch itself (herself?) and gets sucked into the labyrinth. It’s a dizzying visual departure from the real world as always, this one an endless column of film reels and televisions replaying all of Madoka’s regrets (it was pondering the significance of the TVs that got me thinking about pop culture’s impact on these girls).

Madoka tearily accepts that this is her eternal punishment for being a coward. My heartfelt shout of “it’s not your fault!!” is cut short when who should come to her rescue but a new, blue-clad magical girl with a sword and cape?

It’s Sayaka, flying in like a big damn hero, laying waste to the Witch and saving her dear friend. Madoka is not entirely sure whether to react with joy or horror, and even when she’s safe outside the labyrinth she seems unsure. Sayaka is all cheerfulness and enthusiasm, the complete opposite to Homura, who appears at the scene wearing that “not this shit again” expression of hers—exhaustion masked behind bitterness. Sayaka pretty much tells her to stuff off, borrowing a little of Mami’s brand of bravado. In the distance, Violin Boy wakes up and realises he can move his fingers.

And high above the city, a brand new character appears, Kyuubey at her side, munching angrily on a snack and threatening happily to kick this newbie out of the territory. You know, just in case Sayaka appearing as a magical girl, having sold her soul in an effort to justify her existence, wasn’t enough of a status-quo-change cliffhanger to end the episode on.