Oxenfree vs Until Dawn, the Cage Fight

In this horror game, a group of teenagers who kind of hate each other travel to a secluded environment with no mobile reception and only one safe passage in or out (because that’s always a foolproof plan for fun). Tension is high because they’re mourning the loss of the sibling(s) of one member of the group, and people are blaming each other for their death. Two characters kind of have a thing going on and the player has the opportunity to get them together or keep them apart. Spooky things start happening, the group gets split up, and what began as a sweet fun high school romp becomes a quest to survive the night and get safely home. Is it indie ghost story Oxenfree I’m describing, or my Problematic Fave Until Dawn?

These are actually two wildly different pieces of media, but on reflection they had enough similarities that I felt a compare-and-contrast could be interesting, if only because of the first thing they have in common: supposedly I don’t even like spooky fiction, weak soul that I am, yet I loved both of these games and find myself still thinking about them enough to write another thousand-or-so words months and even years after first picking them up. The second thing these two have in common is that it feels kind of incorrect to call either of them “horror games”: Until Dawn is more of an interactive horror movie, complete with a fully-loaded arsenal of stock characters and predictable tropes from horror cinema around which it builds its existence; and Oxenfree is more of a ghost story in the traditional sense. It’s this atmospheric shift that makes comparing them so interesting, since they both manage to be fantastically engaging and frightening despite the very different ways they build their worlds and attempt to scare the pants off you.

Obviously aesthetically they’re very different, which is actually where I think the most interesting comparison between them comes in. Until Dawn is hyper-realistic CGI, where you can see every shred of beautifully-rendered stubble on Mike’s motion captured face, whereas Oxenfree barely even gives its characters faces, small, simple, 2D-ish designs that they are. Oxenfree is almost a platformer, where you pilot your character through the layered backdrop of the location, and Until Dawn is, again, much more of an interactive movie, complete with fully cinematic scenes and, comparatively, not much player-piloted exploration and movement. If I sit here waffling about technical or gameplay elements I’ll probably end up sounding like an ass, since I as a filthy narrative-based-game-loving casual don’t know that much about all that, so I want to instead focus on how these differing art and shot styles impact the way the game makes you feel. 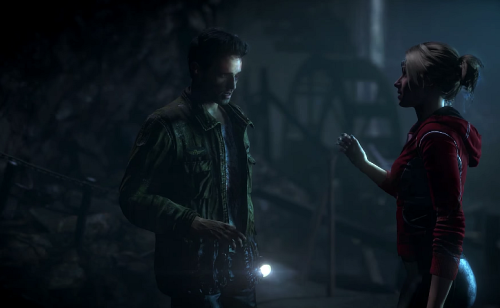 Until Dawn is a cinematic creation, which means the biggest difference between it and Oxenfree is that, basically, it controls what you see where Oxenfree’s panned-out platform layout can’t. Until Dawn can hide things from you, even if they’re in the same room as the player character, which obviously makes reveals and shot changes leading to the good ol’ jump scare much more effective. It can zoom in and make you feel claustrophobic, and it can zoom way out and make you feel small and insecure, and it can do that stupid but wonderful trick where the camera is looking down on the characters from some high place in the trees or ceiling, leaving you with the inescapable sickly feeling that you’re looking through the point of view of some sort of peeking, creeping monster—which leaves an uneasy feeling in the air even when it isn’t obviously Monster Vision with those inverted colours and thermal camera.

This makes Until Dawn much more capable of being scary, in a lot of ways, than Oxenfree can be with its limited camera perspective. Lacking the ability to do fancy camera tricks and be scary, however, Oxenfree takes a different tact and puts a lot more work into being spooky, using the wide-shot, fully-explorable landscape and the ways the player can interact with it to build a sense of foreboding and atmosphere that, for all its darkness and gloom, Until Dawn just doesn’t have.

I’d say the two game worlds are as frightening as each other but in vastly different ways that mostly come down to execution: Until Dawn runs on horror tropes, so it fills its world with locations and scenarios it knows we find terrifying and amps this up for all its worth: cold secluded forests, abandoned hospital-asylums, cluttered basements, and mines. God I hate those mines. And, as I notice and bemoan every time I need to hunt for images for a blog post like this, everything in Until Dawn is the same cold and disorientating shadowy colour palette.

Oxenfree is comparatively very colourful, stylised and soft, a far cry from the ultra-realism of Until Dawn’s art style as I noted before. Does it mean that its landscape is less effective as a place that inspires genuine fear? Oh, goodness no. From the very beginning the unpopulated ghost town (literally) of an island conjures a gentle sense of foreboding that gradually, carefully increases over the course of the game, even before you get to obviously spooky locations like the dead woman’s house or the abandoned military base. The whole island manages to be toe-curlingly eerie long before the shadowy ghosts—a deceptively simple design for a monster compared to Until Dawn’s hyper-detailed wendigo, but I’d argue equally as frightening—appear.

Oxenfree can’t do camera tricks like Until Dawn, so it uses other sensory aspects, most notably sound, to create that feeling of dread and fear. Again, the ghosts don’t have anywhere near the detail or action that the wendigos do, but that same level of fear-mongering comes through in the vocal work as they communicate through the radio. You could say that Until Dawn relies the most on visuals for its horror and Oxenfree relies instead on audio, which are each, it turns out, equally hide-behind-the-couch-cushion terrifying when used cleverly in their own contexts. It just goes to show, honestly: you don’t need insanely detailed CGI or fancy cinematography to create an immersive and frightening story world.

Fear is a complex emotion. If I had to pick one, I’d say of course Until Dawn is ridiculously frightening, but so much of this comes through in jump scares, camera tricks, and all-out terror and violence (not to mention gore) that in some ways it just leaves you exhausted… whereas the gentle build of anxiety and dread that Oxenfree leaves you stranded in is actually much more effective in its own way. Until Dawn wants you to rock back in your seat and scream a lot, but Oxenfree doesn’t often give you that cathartic release, just leaves you hanging in this ominous, haunted landscape. Oxenfree isn’t immune to the joy of the jump scare, but they happen so infrequently that when they do happen they break this endless fog of discomfort and dread that you’ve been stuck in, and I’d argue they’re much more powerful because of it.

This is especially true for the ending—Until Dawn gives you the catharsis of blowing up a house, even if everyone is mutilated and dead by that point, but Oxenfree leaves off with some straight up “I have no mouth but I must scream” existential nightmare-fuel with its implication of the timeloop continuing forever. And you like or at least know and understand Alex as a protagonist by this point, in theory, so you feel really bad in ways you just… don’t, unfortunately, about the teens you watched get murdered in Until Dawn.

Now, I’ve already talked everybody’s ears off about how the characters in Until Dawn are flat at best and messy, problematic creative disasters at worst, so I won’t go too much into the cast of these games. I will say, though, that as fun as switching perspectives and making characters bounce off each other is, Oxenfree gets much more of an actual character-based story done with its singular protagonist. It also has… you know… some kind of emotional depth to its story, with layers and metatext between the lines that Until Dawn just doesn’t possess. What are the themes of Until Dawn? What is it trying to say about grief and human relationships, which ultimately fuel the plots of both these games even though Until Dawn kind of forgets this once it has its trashy “psycho” revenge plot out of the way?

Though they both function on the “bunch of kids stuck together in a location they must escape” scenario, Until Dawn really has no interest in exploring character development or relationships (beyond those characters who want to bone, obviously) and mostly uses its setting as an opportunity to murder its way through its cast of deliberately schlocky stock tropes. Oxenfree makes full use of the tense situation to explore tension within its cast, leaving you with a full set of quite three-dimensional, complicated and enjoyable character dynamics. Also it’s a niggling detail comparatively speaking, but just, oh, the dialogue. Oxenfree is a rare gem where not only does the dialogue feel realistic and natural, but it’s also how actual young people speak to each other. Less can be said of Until Dawn, which clearly comes from the Riverdale school of scriptwriting where quippy one-liners and desperate attempts to seem relevant and on-trend is a higher priority than actually having your characters sound like human beings. 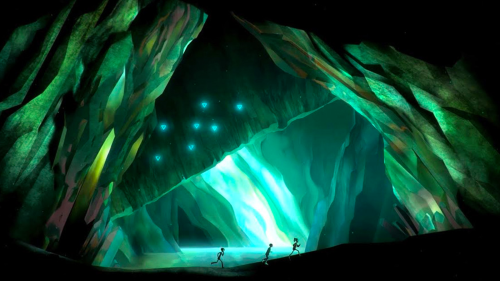 Overall consensus: yes, these are both delightful games about a bunch of frightened teenagers trying to survive in a vivid horror setting for a night, and I would recommend them both but for completely different reasons. Until Dawn is a pile of B-movie nonsense with fantastic visuals and it knows it, and makes no attempt to tell a meaningful story so much as making you flinch, yell, and sometimes gag. Oxenfree is a more drawn-out, quietly menacing campfire ghost story with a legitimate emotional core, earning just as much artistic merit, I think, as the cutting-edge motion capture shenanigans of its big-budget cousin, especially with how well the simple visuals create atmosphere and a sense of a layered and intricate world.

They are both perfectly capable of scaring the hell out of you (or, at least, me, speaking as I am from my own perspective), which is of course the most important thing in theory. Until Dawn is a ripper of a time that you don’t have to think too hard about or invest too many emotions in—I recommend a Maximum Chaos run, a mode invented by WB and me where you aim to cause as much trouble and take as many risks as possible, puffing the game up to its full nonsensical, gory potential. Oxenfree will leave you feeling unsettled as all hell because it makes you care about its cast to the point where you don’t want to see them murdered to pieces, whereas seeing the teens get murdered to pieces is ostensibly the point of Until Dawn. They are two games for two different moods.

Either way, the moral of the story here is to never, ever, arrange to spend time at a secluded location with no mobile reception and only one out-of-your-control way in and out. Just don’t. Stay at home and play video games instead.

One response to “Oxenfree vs Until Dawn, the Cage Fight”