So, ToraDora! A show about coming of age, love, heartbreak, and a bird that swears.

Overall, I enjoyed rewatching this beautiful beastie a lot—it struck the right balance between being nostalgic and impressing me afresh, and it was nice to know that for the most part it’s still as fun and engaging as it was when I first watched it in early high school and it lodged itself in my brain. I’d like to thank everyone who read along each week, and leave you with a few final assorted thoughts and retrospectives…

One thing that does make this show’s story easy to discuss is that it divides itself neatly into arcs, of three-ish episodes each. Once it hits a certain point (probably the pool arc) the show settles into this formula: there will be a school event or group activity going on, and this will serve as the background action plot while more emotional and character-driven conflicts happen. These two things will often intersect, and as we saw in the festival arc they’re quite powerful when they do. Maybe fearing that this is a bit repetitive, the show tries to disrupt and break away from this formula with Kitamura’s arc, which is… where we see that this framework is here for a reason. The Suddenly Blond Kitamura arc was the weakest by far, which is a real shame because it left Kitamura as one of the weakest characters in the show. Which is the exact opposite of what I spent the first few reviews asking for, so it seems the universe is fickle…

As I predicted/half-remembered, exposing the inner selves behind the façade that people put forward became a big theme for the character development throughout the show. Most obviously there’s Taiga, who is a squishy and sincere little soul behind her deliberately scary persona, but it was also interesting to gradually peel back Ami and Minorin and see what makes them tick. Minorin’s storyline ended in misery, but I still can’t say if they went too heavy-handed on the “happy girl is secretly torn up on the inside!” thing. Maybe because the burn was so slow, maybe because they managed to establish that Minorin’s determination and optimism isn’t a façade so much as a genuine part of her character, and the end message there seemed to be that she ought to accept that sometimes feelings like sadness, frustration or love for someone she “shouldn’t” love will pop up, and she ought to deal with and embrace them rather than bottling them up.

At least, we see this exemplified with her finally acknowledging her feelings for Ryuji (shouted across the school—how else?) and letting herself break down and cry when he and Taiga leave. I feel like she could’ve been looked into a touch more deeply, especially given that she’s basically left in the lurch at the end—Taiga was her best friend, and now she’s gone, and Minorin has also very vocally given up the chance to be with the person she likes. Because Taiga’s sudden vanishing is so abrupt and bizarre, we don’t really get the full impact of how this affects the already-heartbroken Minorin. Or how it affects anyone, really, beyond brief distress then grudging acceptance. I feel like there could have been a whole other episode exploring how everyone got on after Taiga left the school, but as I said last week, alas.

Ami also ends the series on a melancholy note, but I got the sense of a fuller character arc for her—she goes from one extreme to another, much like Taiga does, starting off with many different masks and a penchant for creating chaos, and ending up worn back to a relatively down-to-earth person who realises that she doesn’t have to put on a show for everyone to like her, since she’ll be happy simply to be understood. Again, very slow-burn and perhaps not fully realised, but I felt like her personal side story functioned well enough, though damn, I would have been glad for a bit more of a look into her antagonistic-to-strangely-friendly relationship with Minorin. You got the sense it was a “I hate you because you’re doing stupid shit that reminds me of me, but doing it in a slightly different way so it’s okay if I call it out!” situation that grew into a weird sort of mutual respect, and that is always fascinating and fun to me.

Ironically enough, this makes Ami and Minorin basically the only pair of platonic friends with an origin story—the series ended without telling us how Taiga and Minorin became friends, which surely should have been a question Ryuji asked at least once given that it was surely a bit of a mystery. But we also don’t know why Kitamura and him are friends, despite, again, it being a bit strange to contemplate. There’s missed potential here, I think, since this could have been a charming parallel between Tiger and Dragon—despite seeming scary, they somehow both made friends with a happy-go-lucky classmate who recognised and admired their softer side.

But alas and alack, the focus remained on romance, which is annoying as hell, but I suppose fair enough given that it is a show about a love polygon. And what a delightfully tangled polygon it was (even if it was super straight, obviously—not that this is something I would have noted or complained about when I first watched it):

Combine this with the matchmaker plot and all hell broke loose. I can see why this show endeared me to the concept. And I can see why all traditional “one girl caught between two hot guys” love triangles bore me to tears—if you’re going to have multi-character tangles of affection, why not go the whole hog?

Taiga and Ryuji made for a convincing couple, which is always a big factor in whether or not a romance turns me into a cynic or a sap. The slow-build aspect of the show is behind this, gradually letting their friendship grow and the two of them come to understand each other more deeply, peppering the story with little hints like Taiga’s “isn’t it weird that I’m so comfortable with you?” realisation rather than basing it off any “oh no she’s hot!” kind of moments. Which is pretty impressive, actually—now that I think about it there weren’t really any moments of sexual tension, least of all shenanigans like one of them catching the other in the shower. The boob-cupping incident is played for cringe comedy more than a “I Felt Something when I touched her” moment, which in retrospect I really appreciate. The focus of their relationship is entirely emotional and affectionate, and they have a dynamic that actually functions as a deep, believable friendship, and something you could see was turning into romantic love without having to be told through physical/sexual cues (a very good use of The Kiss Rule: if they have to kiss for the audience to know they’re in love, you’ve written it wrong).

Yeah, having them immediately leap to “let’s get married!” when they open up about their growing feelings for each other was a little wild, but you had to have some game-changing drama in there somewhere, and like I said in that episode review, you needed something that dramatic for the popping of the tension to be satisfying. The actual ending arc was a little wonky, though that’s mostly due to Taiga’s bizarre and inconsistent decision to leave rather than stay with the family she’s finally found for herself. I can only assume her moving back in with her mother is meant to be a sign of awareness and maturity, in that she accepts her weird family situation and refuses to be defined by it or trodden down by it, knowing that she’s loved for who she is outside of that. And it’s probably logical, too, given that with her dad gone there’s no one to financially support her.

But, still. Disappearing completely—which is what she’s overall implied to have done, leaving no word to even her closest friends—felt like a very strange direction for things to go in. We can’t have a middle ground? Or perhaps there is a middle ground, and the show simply didn’t have time to explain what it is. Ironically enough, this beautifully slow-burn series that focused so much on emotion rushed its ending and skipped over the emotional ramifications.

Otherwise, Taiga’s character development was rewarding to watch, and while it wasn’t the perfect groundbreaking deconstruction of the cutie pie tsundere, the show did take steps to both call her out on her bad behaviour and attempt to explain and look into how and why someone would end up like this. Taiga is a noticeably different person at the end of the series—Ryuji is, too, but in his own much more subtle way. Ryuji’s growth was hidden between the lines and drowned out by the blinking lights of more noticeable and dynamic development like Taiga’s and Ami’s, but it was there. I might have to watch the show again to map it out properly, but I think ironically/appropriately enough his arc is the inverse to Taiga’s: he talks louder and stands up for himself more, as well as more brazenly standing up for what he believes in. 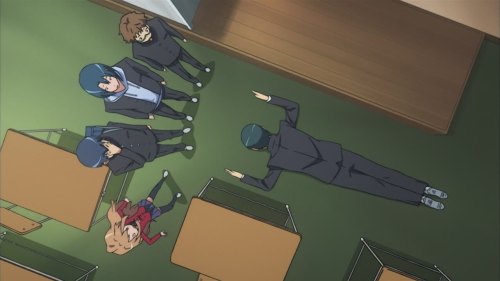 All the characters were engaging and interesting, the one notable exception probably being poor sidelined Kitamura, who gets what could have been (and for parts of it, was) a really interesting arc, before reverting back to being his usual bright and slightly manic self (but with more frequent nudity). Given that Taiga’s crush on him started the whole plot, he’s actually weirdly irrelevant for most of the show, or at least, is relegated to the sidelines a lot. Maybe the girls are just… more interesting to the target audience? It felt a little cruel to shift him into the role of sidekick/comic relief/unyielding support, for whatever reason the writers had. In any case, Ya-chan still wins the prize for most unexpectedly deep and wonderful character.

But overall, oh boy, what a fun and wild ride. It’s good to see that I could, in fact, write over 1,000 words for each episode of this series—there’s a lot going on here, even if ToraDora! does occasionally masquerade as a high school comedy. I mean, it sure is a high school comedy, but there are acres of drama and significant character depth here too. I certainly wouldn’t recommend it to anyone seeking a straight fluffy comedy, because this show will get you to care and think about things.

If nobody tackles and stops me, I’m probably going to end up writing another whole post about the hidden potential in reading Minorin as queer, but until then, goodnight ToraDora! It was a good time.