Cute Queer Webcomics for the Soul

I think we can all agree that the Tragic Sad Dead Gays genre isn’t welcome these days (not to say that it was ever totally welcome, but given the progress of time and sensibilities, this sentiment has become much more mainstream). Instead, a whole bunch of creators are embracing the idea that LGBTQ+ folks are just as capable of being protagonists in stories with happy endings, and stories across an exciting range of genres. This week, we zoom in on the romantic dramedy—tales of love, growth, and shenanigans set in a world recognisable as ours. You’ll laugh, you’ll cry, it’ll change your life—or, maybe you’ll just enjoy some sweet queer content, able to relax with the knowledge that a respectful handling and happy ending is in sight.

As I’ve said before, I feel weird writing about stories that aren’t yet finished, and as all the webcomics below are ongoing, I can’t review them in good conscience because I haven’t seen the full story. Consider these not reviews, then, but recommendations of a few little gems I’ve found this year that I find particularly delightful so far, and that I invite you to jump into and come along for the ride as they progress.

Apparently everyone but me has already heard of this one, but here goes: do you love the glamour and spunk of the Grease aesthetic but want to see it applied to something that’s much more inclusive (with less unfortunate implications and even fewer spontaneous flying cars) than Grease? Give Rock and Riot a try. It’s a cute, fun, high school comedy about a turf war between two rival gangs… or, at least, this is the initial premise. Different storylines branch out to follow various members of these warring groups as they deal with love, friendship and identity. Two girls fall in love, two boys fall in love, and, delight of delights, a non-binary character arrives to steal the show (with correctly used they/them pronouns and a gang of non-gender-conforming buddies to boot) and romance the girl gang’s adorable trans heroine. You basically get the full LGBTQ+ spectrum, and as it comes across it feels perfectly natural.

This touches on themes of discrimination (both against people in queer relationships and, at least in quiet implication, against people of colour) without being a comic all about the issue of discrimination—it acknowledges that these are problems people would have to have dealt with in the ‘50s (and, you know, that people still need to deal with now) but most of the focus is on the relationships themselves, which are all sweet in their own different ways. The biggest thing I love is that it takes this idea that LGBTQ+ people supposedly didn’t exist until a certain point in history and gives it a giant middle finger. And not just in terms of sexuality but in terms of gender, too! They don’t use the phrase “non-binary” or “transgender” to describe Ace and Rolly, but from the language the characters do use and the way they’re portrayed, it’s fairly obvious this is the case (and this is all confirmed by Word of God in the cast list)

Pictured: the level of inclusiveness and cool factor we should all strive for with NB representation

And both of these characters are totally accepted—as I said, as soon as Ace arrives the cast is referring to them by neutral pronouns (“they” rather than “he” or “she”) even though they couldn’t necessarily have known that Ace identified that way. It’s a nice touch of mundane fantasy, where the author creates a world where people just know rather than having to have a person’s identity explained to them. It was a nice touch, as was the flashback chapter to when Rolly wears a dress in front of other people for the first time, and the girl gang is all unconditionally supportive. And even the boys Rolly used to hang out with aren’t mad at Rolly because she identifies as a girl, they’re mad because she defected to their rival gang.

It’s not necessarily trying to be hyper-realistic historical fiction so much as placing LGBTQ+ characters, relationships and issues into something recognisable as a past era, giving it a zazzy aesthetic and saying hey, why shouldn’t this iconic vision of retro Americana belong to queer kids as well? It’s a darn lot of fun.

A man who usually doesn’t read comics walks into a comic book store, utterly lost but on a mission to find one particular issue of Hawkeye for his friend’s birthday. While he’s still not interested in comics after his visit, he is interested in a guy who works there, and the two of them end up bumping into each other later, accidentally and then on purpose, and start a relationship.

This is a very quiet, soft, character-driven story. It drifts through vignettes of their daily life, framed by lush wide shots of London and the shops, studios and apartments Harry and Russel dwell in. I get the sense that the comic will later delve into emotional mechanisations of both its protagonists, with plenty of long dialogue-less shots quietly setting up the suggestion that Harry might be harbouring some issues. Will his relationship with the comparatively chatty and naïve Russel help him work through them? Or, perhaps, will the relationship force the shy Russel to mature?

As with any story about The Gays set in the real world, there’s endless potential to dive down the road of tragic backstories of unacceptance, self-loathing and heartbreak (especially with Harry being a trans guy—which is, as yet, an important part of his person, but merely an accepted feature of his character and not what the story is all about. Russel doesn’t bat an eyelid when Harry reveals this about himself, either, which is lovely). But, like Rock and Riot, I get the sense that while these themes will be touched on for reality’s sake, they won’t form the core of the story and the journey will rest in the hearts of the characters themselves. The synopsis promises that it’s “a kind story”, and it definitely has the air of something soft, sweet, and introspective so far. The dialogue is delightful and I can believe in Russel and Harry as a couple, even if there are hints that their differences in personality and experience might set them at odds. 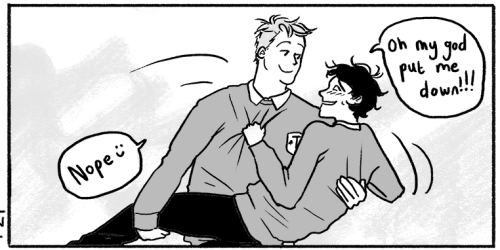 This one I actually found because it’s by the same author as Radio Silence (she can draw as well as write fantastically? Who allowed this? I want to speak to the manager) and you all know how much that novel delighted me. Heartstopper starts off in a melancholy place, with Charlie, the only out gay kid in his all boys’ school, trapped in a crappy secret relationship with an older student. The older student is basically using Charlie to explore his own sexuality, and kisses him in hiding behind the library while holding hands with his girlfriend in public. Charlie’s caught in a spiral of buried anguish about this, which isn’t helped when he develops a crush on his classmate Nick. The two boys bond, Charlie realises that there are people out there who will nurture his self-worth rather than treat him like an object, and at one point Nick quite literally rescues Charlie from his asshole not-boyfriend.

Like With Great Abandon, we’re very much still at the start of the story. I can guess that it will turn into a tender coming of age story about the importance of positive relationships, with plenty of cute and supportive boys-liking-boys content along the way as the protective, supportive friendship between Nick and Charlie gradually develops into something they’ll both acknowledge as romantic. Charlie has mostly been our point of view character so far, so it will be intriguing to see Nick’s side of the story and explore the ways that Charlie can support him, making it a story of mutual acceptance, love and happiness. Also like With Great Abandon, it looks to be satisfyingly slow-burn in nature, so settle in for some delightfully (or frustratingly, if that’s your deal) drawn-out character growth as the boys navigate their school lives.

Real-world homophobia has played a much bigger part in this comic so far than the other two on the list, and feels as though it will be/has been an integral part (at least as a menacing background force, mostly manifesting directly in the not-boyfriend’s nasty attitude) of Charlie’s story and the possible future of the story at large. That said, this also promises to be a sweet and kind story, and if their interactions so far (and, hey, the header image, which has the two of them cuddling) are anything to go by, we’re being set up for a romantic dramedy. They have a Meet Cute and everything! With this in mind, my prediction is that while rejection and acceptance and the tricky business of coming out and coming to terms with yourself will be part of the narrative, but the main focus of the conflict will be internal and character-based rather than external. Which, again, is a narrative that straight characters get to have all the time, so why shouldn’t some queer boys have a turn?

All three of these series are nice for different reasons: if you’re looking for heartwarming, try With Great Abandon, for whacky hijinks Rock and Riot, and if characters discovering unconditional love, protection and support for the first time gets you going, give Heartstopper a shot. Of course, if anyone has any recommendations for me, please feel free to drop them in the comments! You can never have too many sweet and gentle inclusive rom-coms in your life.

Filed under Alex Reads, And I Think That's Neat, Fun with Isms

4 responses to “Cute Queer Webcomics for the Soul”