All gussied up in formal wear, Ryuji and Taiga head to the Christmas Eve party where everyone is set to have a good time—except for their teacher, who is going to a property investment seminar for single women. Why would you hold such a seminar on Christmas Eve night? Because it’s not like you’d have a date if you were the target demographic! The main joke around poor sensei is still that she’s thirty and unmarried and thus should obviously resign herself to life as a cold and practical spinster, because there’s nothing more hilarious than society inflicting existential hopelessness on women based on their marital status and age. Anyway, everyone’s going to the party except the teacher, and Minorin, who looks utterly lead-weight depressed every time we cut to her.

The party itself is a jolly old time: in a fit of weirdness that is acknowledged but never explained, Kitamura is wearing a fake beard but no shirt, and Taiga and Ami surprise everyone by performing a cute little Christmas carol together. In matching outfits and everything! Coordinated dance moves! Ryuji asks when they had time to practice, which is exactly my question, because this was not foreshadowed or led up to at all. I guess it’s nice to see Taiga and Ami cooperating finally, visibly, the endgame of a slow-burn shift from vitriolic enemies to bickering friend-in-laws, but it would’ve been nice to have it be the result of a more tangible buildup. Oh well, the most important thing is that they’re super cute, notably Taiga, which gets Ryuji blushing.

Taiga disappears once the show is done, and Ami tells the curious Ryuji that she’s gone to get Minorin, then head home and wait for Santa. Ryuji has a momentary moment of glee that the girl of his dreams is going to come to the party after all (he even got her a present!), then realises that Taiga’s going to be home alone waiting for an imaginary person while he has a great time. He thinks this is unfair, and Ami tells him again to “stop acting like her daddy”, which in this context most likely means “stop dedicating every fibre of your being to taking care of Taiga and let yourself have a good time”. Which is actually kind of solid emotional advice, that he promptly ignores, dashing out the gym doors and leaving Ami fuming.

Taiga, at home, is sitting watching a solitary candle, resting her feet (which are visibly pinched from wearing dressy high heels, which I thought was a nice touch) and contemplating much the same thing: Minorin is heading to the party per her advice, so she and Ryuji are going to have a good time and finally bond. And Taiga’s going to be sitting there alone, waiting for a made-up person from a dream when she was tiny, which she acknowledges is kind of silly. She’s going to spend her beloved Christmas on her own, with no one special to speak of, like she has before and will likely do the next year…

This melancholy monologue is interrupted by a giant fluffy bear in a Santa hat knocking at her window.

Taiga hauls the dangerously-placed Christmas fursuit inside, and once she’s assured that it hasn’t been hurt from nearly falling six floors, starts running around and whooping with delight. The bear identifies itself as Santa and dances around with Taiga, sweeping her into a big hug and filling the room with her laughter before collapsing into a heap on the floor. Taiga thanks the bear, then thanks Ryuji, pulling off the suit’s head to reveal our hero hiding inside. So she guessed it was him (he climbed through from Ryuji’s balcony, after all, and who else would Taiga let in via the window? A real home invader would have been left to fall to his death) but appreciated the gesture so much she played along. It’s a beautifully sweet and sincere little scene, and even as she calls him a dumbass for swapping his actual suit for a Christmas bear suit, she’s smiling genuinely the whole time.

Convinced to go back to the party to see Minorin (and maybe find his real clothes), Ryuji runs from the apartment leaving Taiga smiling after him. Until she starts to cry. In the happy high of the Santa experience she doesn’t even notice at first, and seems genuinely confused as to why there’s water coming out of her face.

Then she thinks it through, adding to her previous melancholy that Ryuji and Minorin would be having a good time while she sat home alone: yeah, Ryuji and Minorin are going to have a good time. Maybe so much of a good time that they start dating! Which was what she wanted, right? It’s been her goal all series, her Mega Goal over Christmas. It’s the same surreal feeling Ryuji had when he realised Taiga and Kitamura might actually end up together, but with a great dose more sadness. Because if they start dating, wouldn’t it be weird if Ryuji and Taiga were so close? Taiga would no longer be the one by his side, the most important person to him–by society’s logic, this role will be usurped by his girlfriend. And holy crap, Taiga realises, she does not want that.

I hate the ingrained idea that you have to immediately dump your best friend to spend all your time with a significant other once you have one, but that’s just me—more to the point, we’ve seen that both Minorin and Ryuji care about Taiga so much that they’d never cast her to the side even if they did fall in love. It doesn’t seem to simply be a question of being friend-dumped, though, since surely Taiga knows this. There’s genuine… heartbreak in her realisation that Ryuji has been here for her all along and now she might lose him.

And so she goes bolting into the street calling for Ryuji to come back, falling to her knees in a fit of hopeless ugly sobbing when she can’t find him. All this would be heart-wrenching enough if it hadn’t also been seen, unbeknownst to Taiga, by Minorin, who is finally on her way to the party. When she does find Ryuji (still in the bear suit), she starts the first proper conversation they’ve had in weeks by basically dumping him. She brings back that “seeing ghosts = finding love” metaphor they played with on the beach trip, and says she’s decided not to look for ghosts, ever. And walks off, leaving Ryuji to comically faint, which I felt was a bit dissonant given how emotionally intense this whole last chunk of the episode was. 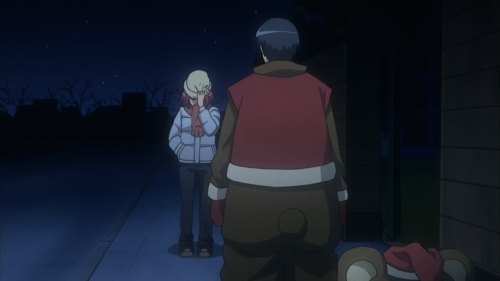 Damn, though—rejected on principle before he could even confess his feelings, and rejected through metaphor while Minorin hides her face. There is definitely more to what she’s saying, but unexpectedly it isn’t actually revealed and the arc ends with more questions and turmoil than it began with. Taiga’s realised that, selfishly but validly, she loves being close to Ryuji and having him be that guardian she’s always dreamed of, maybe even in a romantic sense, and that she doesn’t want to lose that. Ryuji’s still grappling with the question “do you love Taiga?” which has been further complicated by Ami’s observations that their relationship is weird and he needs to figure out his stance on it. Ami has legit fallen for Ryuji and it seems to only be causing her all-seeing eyes grief. Minorin is still suffering but hiding it.

It’s also revealed in a small but significant-feeling part at the start that Ya-chan ran away from home when she was young (she gives a watch she nabbed from her parents to Ryuji), which wasn’t really relevant to the episode overall but got my attention. Is she okay? She’s gone through so much if she’s run away from home, raised a kid all on her own by working nights, after the kid’s father may or may not have been murdered by the mob. What is your story, girl? I feel like it would make a great heart-wrenching novel (which, perhaps, is why it’s kind of refreshing to see that kind of backstory on a character who’s genuinely kind, outgoing, and just here to have a good time?).

Christmas is ruined. I called it. At least half-naked Kitamura was having a good time (I think?)