The Art of Being Self-Aware

Let’s say you’re writing a horror story set in what’s meant to be the real world—that’s a world where horror stories exist, right? So it stands to reason that your characters might have seen some of these horror movies or shows. As a storyteller you have to make the choice whether to have your characters say, upon walking into an abandoned abattoir full of meat hooks, “Hey, this is the kind of place where people usually get horribly murdered in horror stories!” And once you’ve done that, you need to make the choice to either fulfil the expectation that a knowing audience will have, or not to fulfil it, thus demonstrating the story’s awareness of the genre it exists in and playing with the tropes you, your characters, and the audience know are going to come up. It’s a multi-layered delightful mess, and is sometimes done better than others.

My personal take on this trope-wise trope is that if you’re going to glance knowingly at your audience through the fourth wall, you may as well attempt to play with their expectations. True, it can just be a self-congratulatory wink from author to audience, but it can change the kind of story you’re telling and make it fun and fresh. If your horror story protagonist knows a lot about the horror genre, they probably wouldn’t walk into an abandoned abattoir in the first place. And, in the realm of anime romance, as are the two examples I’m looking at today, awareness of the formulae that romances usually follow can actually twist and break them and lead you down a much more engaging story. Or not. Let’s discuss:

Gekkan Shoujo Nozaki-kun is a shoujo series about the author of a shoujo series, so we’re already looking at multiple layers of meta. The anime jumps on this for most of its comedy value, having its eponymous character Nozaki look at his everyday life—which is, of course, shown to us in romance genre anime form—through the lens of the romance genre fictional scenarios he draws. In trying to empathise more with his heroine, for example, he attempts to spend a day living as her and copying her actions, which fails in all sorts of directions since what works for a cute girl on the page doesn’t always work in real life, and certainly looks weird enacted by a two-metre-tall deadpan-faced dude (seeing these traits we usually see in a small, cute girl in Nozaki is expectation-flipping humour in its own right, but it gets deeper from here).

Less literally, though, the series sets up multiple scenarios and characters that are lifted straight from the well of tried-and-true romance devices, with the full intention of messing with our ingrained perceptions of them. Sakura, who has a longtime crush on Nozaki and is an avid reader of shoujo manga, forgets her umbrella on a rainy afternoon. She’s at a loss for what to do, when who should appear but her hero and love interest Nozaki? Cue sparkles!

Sakura, as an avid shoujo reader, internally leaps for joy because according to all the laws of romance tropes, Nozaki as the hunky hero should see her in trouble and invite her to share his umbrella, leading to the two of them walking home together in an intimate and charming moment that increases their bond. The characters know this, the show knows this, and the show knows we know this. The punchline, of course, is that Nozaki forgot his umbrella too, and what seems to be him leaping to Sakura’s rescue ends with him calling them both dunces. The comedy lies in that bait and switch—we recognise the cliché, as do the characters, and we can laugh when the cliché is turned on its head (and poor Sakura reacts).

To contrast, The World God Only Knows is a show about a dating sim champion declaring that he can conquer any girl, at which point a demon appears and enlists his help to capture lost souls who have escaped from Hell. These loose souls are hiding in living humans’ hearts, and the best way to crowbar them out is to replace them in that human’s heart by making them fall in love. For some reason, all the Hell-spirits seem to have chosen high school girls to hide in. Our protagonist, Keima, explains in a flap that he’s no good at wooing real girls, just fictional ones designed to be wooed, but the contract is sealed and he has no choice but to attempt to flirt his way to an exorcism with his various classmates. 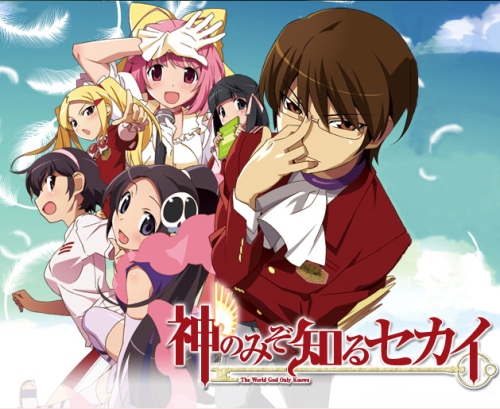 His immediate train of logic, of course, is to go about “conquering” these girls the same way he would if he was playing a game—he assesses their behaviour and identifies them as a certain type, and models his behaviour into the same he’d use in-game to appeal to that type. It’s the perfect set-up for this boy learning, hard, that how you treat girls in dating sims does not translate to success with girls in real life, leading to comedy in his rejections and perhaps some message about how girls aren’t all just waiting to fall in love with you if you put enough proverbial kindness coins into them. Again, the meta humour would come from the bait and switch—the characters, the story, and the audience all know that in anime a tsundere romance usually goes a certain way, and so subverting those expectations is where the fun (and drama) would lie.

Except that The World God Only Knows (alternate title God Only Knows Why I Watched This) doesn’t seem to make any lasting attempts at this. It’s deeply self-aware of the anime tropes it’s playing with, but… it doesn’t play with them so much as play into them. Though he might not succeed at first, Keima’s dating sim tactics eventually wear down and successfully romance the girls he’s going after. I only watched the first three episodes, so if it gets cleverer from there on out someone please let me know, but across those three episodes a formula seemed to set itself into place: Keima is assigned a girl to woo, that girl embodies a certain dating sim trope, Keima approaches her like he would approach a fictional character of that trope, and she falls in love with him. Judging by the ending theme this method sets him up with a fairly substantial harem (also judging by the ending theme, whoever storyboarded/animated it had at least a little bit of a foot fetish, but hey, I’m here to critique the writing, not kinkshame the creators. This time).

It’s all very well to be self-aware of the conventions of your genre and your medium, but a) self-referential jokes about otaku/fan culture in a work aimed at otaku/fans run the risk of falling flat and feeling lazy, and at worst, alienating said fans by falling off the fine line between laughing with them and at them—see Sherlock season three. And b) if you’re not going to do anything interesting with this level of meta humour you’ve dredged up, why use it at all? Gekkan Shoujo Nozaki-kun succeeds in that it has fun playing with your expectations, but God Only Knows, by contrast, acknowledges what you expect to happen but then makes it happen anyway. 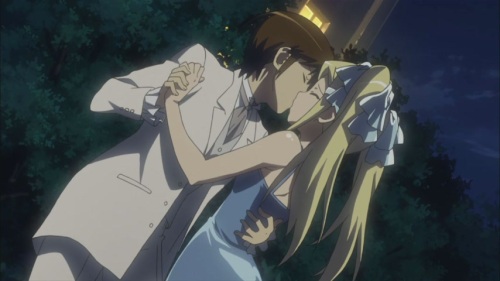 Admittedly, part of the reason God Only Knows failed to keep my interest was that I was looking forward to seeing Keima called out for all his “I can conquer any woman!” BS by realising that he’s been living an indulgent fantasy, and maybe growing as a person and learning to respect real women along the way. But as well as being personally grossed out by the demon girl not only not calling his awfulness out but also falling in love with him (at the same time she’s masquerading as his little sister, go figure. Anime was a mistake), I just can’t imagine it makes for interesting viewing if it sticks to that formula it so neatly created in its first arc. You know what’s going to happen. And indeed if you looked at it as a standard magical-ish harem anime, self-aware of its clichés or otherwise, you’d know what was going to happen anyway.

Granted, with Gekkan Shoujo Nozaki-kun you basically know that a common romance trope is going to be flipped around and then subverted and it’s going to be played for laughs. But that still leaves a world of variety. And, though this is a more specific gripe, Nozaki-kun also treats its characters (male and female) like people rather than plot points for the infallible protagonist to win and move through, so that gives you a much broader range of possibilities to draw story material from. I suppose what I’m trying to get at here is that it makes for a much more interesting and engaging show if it says “now, you’d expect me to do this normally… but what if I didn’t?” and engages in a level of tongue-in-cheek subversion, rather than if it simply says “you see this thing we’re doing? It’s the same as lots of people have done before! We know that! You know that! Cool, now that we’ve got that established, let’s do the thing!”

It’s all very well knowing the genre you’re working in and toying with some meta humour—but for me at least it can be a lazy trick to either get the audience on your side or cover up the flaws in your project. It can be clever and funny, and make you question your ingrained expectations of a certain genre (see Nozaki-kun, the rom-com where no one ends up with each other despite how much it looks like it’s heading there). Or it can be dumb. Saying “I’m aware that what I’m doing is clichéd!” doesn’t actually remove the cliché or excuse it, it just makes you kind of an asshat because it means you knew but you did it anyway.

Filed under Archetypes and Genre, Things We Need to Stop Doing

Tagged as Gekkan Shoujo Nozaki-kun, The World God Only Knows

5 responses to “The Art of Being Self-Aware”