ToraDora #16: “Can We Agree That Duels Are Dumb and Immature?” 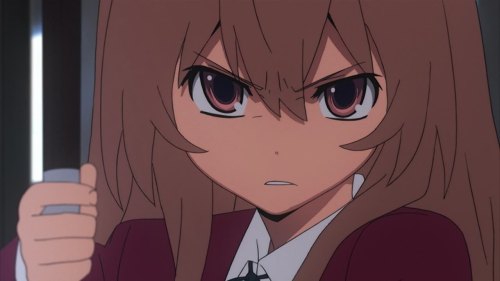 Look, there’s politics (even if they are only on a high school council level) and a literal fight in this episode, I had to make a Hamilton reference somewhere.

So this week Kitamura drops some more Drama Bombs re: his romantic feelings, which is something he’s gotten very good at. This time we see a lot more of the melancholy and raw side of him that’s hidden beneath his bravado, as the poor boy crumples and confesses what he’s been keeping as an embarrassed secret from even Ryuji, his best friend: he’s in love with Kano. The militaristic and terrifying student president lifted him out of his heartbreak after Taiga rejected his confession of love, and throwing himself into student council work at her side made Kitamura feel alive, productive and happy. Somewhere in there he fell for Kano hopelessly, but considered himself unworthy since she’s so powerful and great, so he was going to wait until he’d been elected as/promoted to president before he asked her out. But…

Fast forward to two episodes ago, where Kano says “We need to talk”. She told him that she’d been offered a place studying abroad and was leaving in a week, because that’s the kind of info you keep bottled up and then drop on your friends at the last minute. Kitamura kind of realised that 80% of his ambitions stem from his love for Kano and wanting to impress her, and if she’s not going to be around the entire foundation of his career collapses, and with it his direction in life, hence the mental breakdown, rebellion, and blondness. Turns out placing all your hopes and dreams on one person who you can’t even be totally honest with or about isn’t such a swell idea.

Kitamura says all this with a bruise on his face because his dad “talked some sense into him”, which is not really plot relevant but I just want to mention it because oh my God, Kitamura is having a rough time. His parents believe in physical violence as punishment for “messing around”, which would be horrifying and dramatic enough if he wasn’t also stuck in a hell-spiral of realising that he’s placed all his hope and future plans in one person who’s suddenly not going to be there, and had had a subsequent breakdown over it. (The romantic dilemma definitely takes precedence here and the casual child abuse is just kind of there, but if the show doesn’t think it’s a big deal I still do). This kid is not okay. It kind of makes Taiga and Ryuji’s plan (which the entire class is apparently in on) to emotionally manipulate his good soul into running for president a dick move, and certainly makes their “Taiga’s Reign of Hell!” campaign posters less funny.

But, still being a good soul, Kitamura comes through and jumps back in the running on the last day, leaving everyone cheering. Including Kano, who encourages him in her own unique aggressive way. The next day Kitamura steps up to give his candidate speech to encourage everyone to vote for him, a formality that’s followed even though Taiga pulled out and he’s now the only candidate. It’s all looking optimistic, until Kitamura begins to stutter, and then instead of expressing his policies and philosophies to the listening school population, he turns and shouts a confession of his love to Kano. On stage, in front of the whole school and the eyes of God. The microphone whines and the world freezes.

We don’t see Taiga’s face, though Ryuji (who already knew this and didn’t mention it to her) is watching her worriedly the whole time. We do see Kano, though, who just kind of stares at Kitamura for a moment, then takes her own microphone and tells the audience to vote for him because he’ll be a fun president. The school cheers at this, probably glad for something less confusing to react to.

Kitamura’s character-defining happy-go-lucky attitude is entirely and successfully broken. He’s sobbing over his desk, and Taiga tells Ryuji that he needs to go be with him. It’s not her place to try and comfort him, not now, and Ryuji is better suited and more worthy. It’s a very mature handling of events, until she goes “I know what I can do though” and pulls her goddamn wooden sword out the back of her shirt.

Actually, I remember this episode! It’s the one where Taiga beats the actual living shit out of the student president.

I mean, it’s a two-sided fight rather than a beatdown, since Kano’s immediate response to being threatened/challenged with a wooden sword is to borrow her own wooden sword and retaliate. So Ryuji arrives, called in a panic as the one guy who can control and reason with Taiga, to find a classroom turned into a scene of destruction. It’s not even a girlie, visually appealing fight with fan service elements (save for perhaps a fallen stocking here and there); this is a terrifying, wild and real schoolyard fight like you’d see between real rowdy students, no rosy filters overlaid. Furniture is overturned, slurs and insults are hurled at the top of screaming voices, there’s punching and kicking and tearing and almost but not quite biting and the rending of flesh. It is brutal, and barely broken up when classmates restrain Taiga and Kano (Kano has a particularly entertaining move where she kicks her shoe across the room into Taiga’s face).

Taiga demands that Kano be honest with Kitamura, to just say that she hates him rather than leave him hanging like that, unacknowledged. Kano screams back that Taiga’s a single-minded fool who only thinks of herself, and oh, she would die to be that stupid—but she’s not, and she knows Kitamura well enough to know that if she told him she liked him back, he’d follow her to where she’s studying in America and throw in all his dreams for her sake. Kano would kind of like that, because she likes him, but she knows those are selfish feelings and she loves Kitamura enough to want him to thrive on his own even if it means them being apart. She understands that people have to go their own ways sometimes, make and follow their own paths, even if it messes up their feelings. 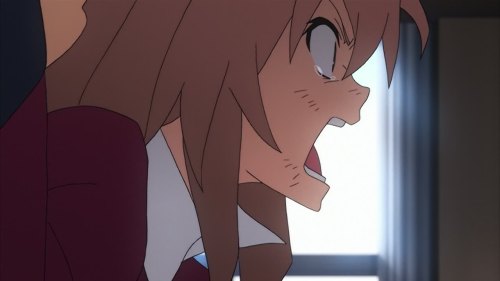 So there’s another profound Confession of Love Drama Bomb… and Kitamura comes in to hear it, to Kano’s teary horror, and he subsequently bursts into tears again and tells her it was a privilege to know her and fall in love with her. All the named characters in the room are either bleeding, crying, seething with rage and confusion, or all of the above. It’s a bloody mess, and it leaves a fog of awkwardness that lasts well into the evening. Apparently as punishment their class was tasked with cleaning up the teenaged warzone within, because in the process Ami’s friends find Taiga’s notebook. Minorin just numbly watches—as she has been all episode—as they open it and find the precious picture of Taiga and Kitamura dancing at the festival (a beautiful and important moment where Taiga was pulled from a crushing sadness into feeling like she had a place in the universe, now rendered moot…). There’s also another photo under that, though, but Ami snaps up the notebook before the audience can see what it is, promising to give it back to its owner.

She walks past Minorin and quietly asks if she’s feeling guilty, and Minorin physically winces. What?

Well that was a wild goddamn ride. Given how slow the past two episodes were, this ending kind of feels like a car gently, carefully accelerating before its driver jumps on the pedal with both feet and speeds straight into a brick wall. It’s left most of our main cast in emotional turmoil of some kind, whether open-wounded like Kitamura’s or mysterious and still-buried like Minorin’s, or whatever it was that made Ami scowl as she walked past her with the diary. Ami knows too much. That’s why her hair is so big. Oh my goodness gracious.

5 responses to “ToraDora #16: “Can We Agree That Duels Are Dumb and Immature?””