Adventures in Asian Drama: Age of Youth/Hello My Twenties! 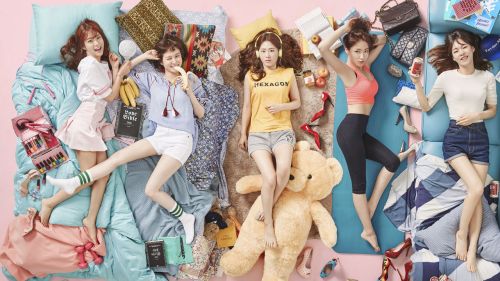 This series has two alternate titles that kind of neatly sum up its duality: Hello My Twenties! sounds like a fun and quirky romp through college life, whereas Age of Youth sounds much more melancholy and thoughtful, and, out of the two, far more likely to be a show that deals with murder. Well, it is indeed both of these things—the Korean dramedy follows five twenty-somethings who are all living in a share house, delighting in the premise of throwing together a group that normally wouldn’t have any reason to interact with each other and seeing what happens. It follows the girls through various coming of age plotlines, dealing with everything from standing up to your disappointing boyfriend to… being hunted down by the man who holds you responsible for his daughter’s death. So, you know, your average domestic shenanigans.

Timid newcomer (the baby of the group at age 20) Eun-Jae arrives at the house to start university and finds herself cohabiting with glamourous exhibitionist Yi-Na, ditzy but compassionate Ye-Eun, serious and withdrawn Jin-Myung, and outgoing and quirky Ji-Won… who informs them all that they have a sixth housemate, a ghost who lives by the shoe closet. The ghost, far from being a throwaway drunken line, morphs into a main plot point the further into the series you get, since three out of five of the housemates have some sort of tragic backstory, and wonder aloud if the ghost belongs to them…

(Spoilers from here on out!)

There are plenty of shows that live off the ‘strangers in a share house’ formula since it’s such a stellar catalyst for shenanigans, so it was interesting to see a Korean version of the trope. The first episode is… actually utterly miserable, as anxiety-stricken Eun-Jae suffers at the hands of her inconsiderate new housemates—Jin-Myung basically ignores her, Ye-Eun eats all of her special homemade jam, and she can’t fathom the courage to stand up to any of them. Eun-Jae eventually tells them off, but the real rescue comes in the form of Ji-Won, the best character in the show and light of my life, who is welcoming, exuberant, and believes wholeheartedly in girls taking care of each other. And ghosts, apparently. 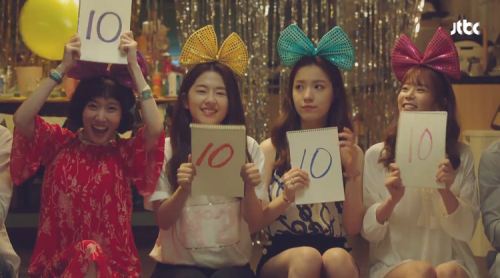 Where she could have just been that one outgoing, thirsty girl, Ji-Won has an edge of maturity too—for every time she jokes about sex, she hastily adds, especially to little Eun-Jae, to always wear a condom and take care of herself. And it’s also enjoyable to note that even though she is told, more than once, that men don’t tend to like girls that are loud, charismatic, and crude, and she laments this, she never once makes an attempt to change herself to be more appealing to them. In fact, it’s implied towards the end that her journalism club co-member has a crush on her for these very reasons. Which is beautiful, honestly, even if she doesn’t get a cut-and-dried happy ending in the dating department—Ji-Won just loves Ji-Won, and has no shame about it or much else in life (hmm, except for starting the ghost plotline, which rapidly spiralled out of control…), and it made her the most positive and entertaining part of the show.

Overall, the show is fairly candid about the whole sex thing. I can’t press my own cultural assumptions onto it, me not being Korean or living in Korea, but actually it’s rare for any media to have women be so frank about it, unless it’s some sort of crass Amy Schumer dick joke fair. These girls have bodies that work—they need to pee, they need to poop (we know, because there are constant battles for the house’s singular bathroom), they get periods, they have sexual appetites. And it’s just kind of there, without too much of a big deal placed on it, apart from Eun-Jae blushing and Ye-Eun occasionally yelling “GROSS” when Ji-Won is waving phallic cucumbers around. More than that… one of the characters is literally a sex worker. Yi-Na has three “boyfriends” who she goes on dates with, accompanies to events, and has sex with, and as well as them doting on her with all the glamorous items she could want, they pay her for her time. 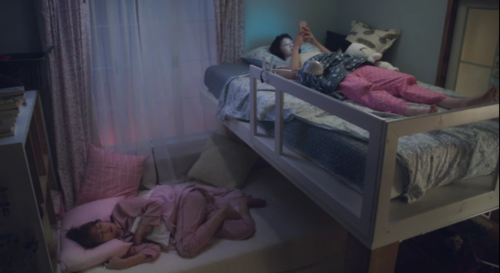 What I’m actually most curious about is how everyone else affords to stay in such a nifty, glamorous house

It’s a bit of a shock when the housemates find this out, and it creates a rift between some of them for a while, but… overall it’s not that big a deal. Yi-Na does eventually leave that profession behind and get a different job (comically horrified by how expensive everything is when she doesn’t have a sugar daddy’s credit card on hand) but it has nothing to do with her thinking sex work is degrading or gross, and much more to do with embracing life rather than coasting through it easily, a realisation she has after coming to terms with the fact she survived a terrible accident and others didn’t (it’s complicated). No relation to her work! While there was some underlying hints that yeah, working as a girlfriend for hire is no way to make a solid life and future for yourself, Yi-Na leaves the “easy” life behind with no real qualms against it. Her character development is about her learning to find something she wanted to work towards rather than slack off and use her charms to simply get by, which was an endearingly fresh and non-condemning take on the whole thing.

Jin-Myung has the most emotionally exhausting storyline, and quickly becomes one of those characters that makes you feel like sending hate mail to the writing staff over if they don’t get a happy ending. Mercifully, she does. Less can be said of Ye-Eun, who happily coasts through the series with little else but boyfriend drama, until said boyfriend becomes an abusive, crazy asshole. While I’m always up for “girls rush in to gallantly rescue their friend from a bad dude” scenes, it seemed like overkill. It was a relatable and interesting enough drama plotline with him just being disappointing and a bit of a douche, but I suppose they felt the need to up the ante. After all, if Eun-Jae has a murder plot running through her family history (???), a sloppy boyfriend doesn’t really match up in terms of melodrama.

Yeah… Eun-Jae has suffered through a string of family deaths, which later in the series begin to get investigated over suspicions there was some sort of insurance ploy involved. Eun-Jae also lives with the guilt that she accidentally—or perhaps not so accidentally—caused her dad’s death. It’s a convoluted and exciting whirlwind of a thing that frankly I would have liked to have spent more time with, rather than following Eun-Jae’s awkward escapades with her first boyfriend. Given the choice between seeing him ruffle her hair and actually having the time to understand the murder plotline, I would choose murder every time. Though her misguided infatuation with a guy with improbable fashion sense and fancy hair is a good time, I will say that. Still, the murders! Her relationship with her flighty mother! What is going on there? Help me out!! 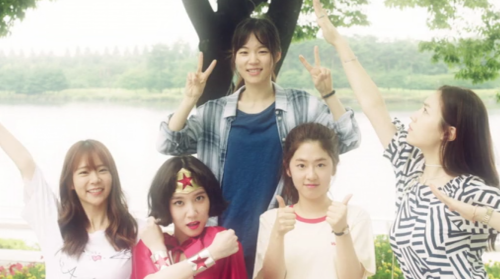 Girl power can’t solve murder mysteries in this case, but it can get you through

Overall, apart from a few wildly confusing and suddenly dramatic and death-filled occurrences, Age of Youth was an enjoyable and moreish series with a casual but strong, underlying focus on female friendship. Yes, my little soul ascended from my body a bit when Ye-Eun referred to her housemates as “my family” while praying for them. They grow closer and help each other out, whether it’s on serious terms like rescuing someone from their douchebag ex, or just being supportive and kind like helping pick out clothes to wear to a job interview. As much as it can be convoluted and dark, it’s sweet. Every time Jin-Myung smiles an angel gets its wings and a kitten is adopted.

And hey, even through the abject awfulness of the first episode, I stuck through because I was so mystified by the house—it’s an ergonomic, adorable IKEA dreamscape, and it’s so aesthetically appealing it almost becomes a scene-stealing character in its own right. Or at least, inspires you to tidy up your desk and add pastel accents to everything in your life. Hooray for the Belle Epoque!

4 responses to “Adventures in Asian Drama: Age of Youth/Hello My Twenties!”