Make It Gayer: Until Dawn

Until Dawn is one of the most aggressively straight pieces of media I’ve come across. All but two of its eight main characters are set up as romantic/sexual pairs, and defined as this in the quick flash of character introduction we get at the start of the game. It’s equally important for the player to know that Ashley is “academic” as it is to know that she has a crush on Chris, and given how wafty the characterisation in the game can be, their relationship status becomes one of the few concrete things we do know about them. The only two characters who aren’t either dating someone of the opposite gender or mutually crushing on someone of the opposite gender are Josh and Sam, and Josh spends half the game making lewd jokes like “I just want to push her down and make some snow angels you know?” about the girls.

Sam is a strange outlier in that her relationship identifier is “Hannah’s best friend” rather than “Emily’s boyfriend” or “Mike’s ex” or “has a crush on Ashley”. Josh is noted as Hannah and Beth’s older brother (for clarity, mostly, so in case you missed the brief mention of it in the prologue you know this important bit of information and the story will make sense), but this still leaves Sam as the only one defined by a platonic relationship. Which really, really sticks out like a sore and lonely thumb when everyone else is paired off for their respective storylines into romantic couples rife with sexual tension, some… more believable than others.

Look, you don’t even necessarily have to make Until Dawn gayer, it could just stand to revolve a little less around heterosexual, sexual-desire-fuelled relationships. For example, we know that Matt and Emily are dating and that Emily used to date Mike who is now dating Jess but… we have no idea why any of these people are friends, or if they even are friends, given that a good chunk of the cast either never interact or spend the whole time fighting. Because the characters are sent off into the story in pairs, and always romantic one-boy-and-one-girl pairs, you get a total of maybe three platonic conversations, and all of those are between the boys, and at least two of them involve Josh saying gross sexual crap about the girls anyway.

There’s certainly no effort made to step over the ankle-height bar of the Bechdel Test, and the only notable solo female interaction I can think of is Emily and Jess calling each other “whore”. So, not exactly positive. Even if you consider that Sam and Josh have a relatively normal conversation that one time in the basement, Sam says in the police interview at the very end that she “thought we really had something” which seems to imply an undertone of romantic longing to that relationship as well. Which is very much soured by him chasing her semi-nude through the house, fearing for her life and put in a very vulnerable and sexualised position, when Josh is geared up as The Psycho. So I’d hardly call that a positive and well-rounded platonic relationship either.

It’s legitimately like the writers couldn’t think of any reason boys and girls would interact outside of wanting to bone each other. How do these kids know each other? Why are they willingly spending time locked together on top of a haunted mountain? The retreat is a tradition, but what started it? Why did Mike and Emily get together? Why did they break up? Why did they kind of hug that one time at the start of the game, starting Romantic Drama but never actually getting addressed again? I have so many questions and most of them come from lazy writing, and writing under the assumption that 99% of what fuels and motivates teenagers is love and lust for other teenagers of the opposite sex. Sometimes they have best friends, maybe. Sometimes. 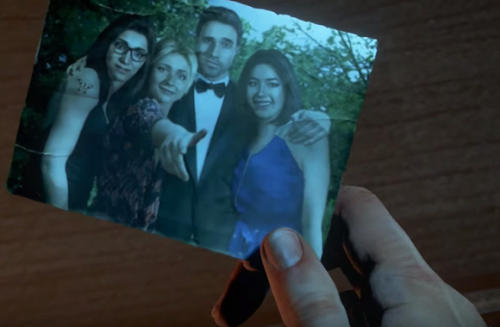 Statistically, at least one in seven people is not heterosexual, and I know this because we all made jokes about it in high school capped off with “and it’s not me!” Now no one in my immediate friend group is straight, but that’s a hilarious irony for another day. Adolescence is rife with Confusing Feelings about the people around you, hormonal or otherwise, so a cast full of teenagers (they can still be horny, let me finish) is the perfect place to explore the varied platter of bizarre new self-discoveries you have about your mind and body in high school.

Let’s start with some hypothetical storylines: it’s a small but strong fan theory that Sam is a lesbian, because she’s the only girl not aggressively written into love/lust for a dude, and that’s the kind of abnormality you can legitimately read as queer subtext in this ridiculous game. In fact she’s the only girl defined by her relationship to another girl, and though it would remove one of two concrete platonic relationships in the story, it’s an intriguing idea that she was actually in love with her best friend Hannah. I mean, there’s a photo in the house of Sam and Hannah with Emily and Mike at prom, taken when the latter two were dating, and knowing that kind of frames it as a picture of two couples. Again, given the lack and laziness of character detail, you can read however you want into these little dropped nuggets.

It would explain, perhaps, why Sam dislikes Mike so much (as well as him being partly responsible for Hannah going missing, obviously), and add a layer of heartbreak to the scene where Sam is going through Hannah’s room and finds all that “I love Mike!” scribbling. Why couldn’t you love Sam instead? She was always there for you, but you loved this boy, and now you’re a flesh-eating monster. It’s unrequited and tragic lesbians, so it’s not ideal, but honestly I’d take it just for a breath of fresh air in the stale and capital S Straight realm that is this game.

Now, who else isn’t defined by a romantic relationship? Josh? Cool, let’s say Josh is gay. Hear me out—he’s realised he’s gay and is deeply uncomfortable with it (for whatever reason) and this is why he’s always making sexy jokes about the girls. To remind people, out loud and often, that he does in fact like girls. For an added bonus, let’s say he’s realised he has a crush on Chris, which he also feels weird about (relax, Josh, you guys are one of the biggest fan ships, and your name is “climbing class”), which is why he’s so keen for Chris and Ashley to hook up. Again, would be unrequited and tragic and makes our mentally ill, violent villain gay, so not ideal. But of course, the trick with any of these things is to add more queer characters so your villain isn’t the only LGBTQ+ fellow in the cast, and you avoid stereotyping with a spectrum.

This is an indulgent theory of mine, but hey, what if Matt was also gay? He and Emily are actually fake-dating, which is why their relationship is such a cluster-mess of casual abuse occasionally punctuated by clunky flirting, because they remember mid-argument that they’re meant to be acting like a couple. Emily couldn’t stand the idea of showing up to the lodge single when her ex had moved on, and Matt, budding sports star that he is, needed a beard, so they formed a mutual arrangement. It would have been perfect if they didn’t hate each other so much.

Also for consideration: Jess is on the asexual spectrum, which is part of why she’s so nervous about having sex for the first time (it’s just the thing you do, she knows this, but something about it doesn’t feel right even though she likes Mike a lot). Mike is bi, hence all the jokes about making out with dudes and having threesomes—it’s never capped off with a “no homo”, so you could read it as him joking about his sexuality the way people often do. He probably messes around on swingsets and laughs “Look, I swing both ways!” while everyone else rolls their eyes. He’s charismatic enough that he probably wouldn’t care.

Even without toying with the story to the point of say, switching the places of characters so now it’s Ashley and Jess who go off together as a couple (would they work as a couple? They’ve never talked to each other onscreen, so we don’t know!), adding some sexual diversity just makes the setup of this cast so much more varied and interesting. There’s nothing wrong with having straight couples—I’m not saying that heterosexual pairings are unwelcome in any piece of media ever. It’s just when they’re treated so aggressively as the default and compulsory, and pairing characters up is prioritised over actually giving those characters any chemistry or other non-romantic relationships, that it all starts to feel stagnant.

And hey, Until Dawn gives you the power to decide who lives and who dies—if Sam is the only gay character in the cast, and in your playthrough the only one who survives, you’ve made her a bulletproof lesbian and the flipside of the media norm. Good for you, girl. You get out of there, live on, and go find yourself a girlfriend who returns your feelings and won’t turn into a cannibal nightmare.

Tagged as LGBTQ+, make it gayer, Until Dawn

4 responses to “Make It Gayer: Until Dawn”