ToraDora! #9: Love in the Time of Seaweed Ghosts

The arrival of Kawashima Ami, Destroyer of Worlds, somewhat derailed the matchmaker plot, and as much as I love her it’s nice to be back in the realm of Zany Schemes. And they’re even zanier—and certainly more coordinated—than the ones from the beginning of the show: Minorin, it turns out, is terrified of ghosts and anything even remotely spooky, so Taiga hatches a plan to haunt the hell out of her so Ryuji can come to the rescue in a grand heroic gesture that will no doubt make her fall for him. What could go wrong, right?

In a blend of cosmic significance and comedy, Taiga and Ryuji start the episode waking up from almost the same nightmare: they were married, lived in a doghouse, and had a bunch of puppies. Mutually grossed out by this, they decide to work extra hard on pairing each other up with their respective crushes while away at Ami’s beach house, a holiday that’s mercifully evolved from a manipulative plot on Ami’s part into a group road trip. Kitamura and Minorin are along for the ride, and seem to enjoy how much they’re hanging out—as we see when we find them spinning wildly in the train station with synchronised choreography, they’re actually very compatible, if only because they both have endless energy, good will, and potential for weirdness. Taiga and Ryuji reluctantly join in the spin-dance when Ami arrives, and she just straight up denies that she knows them.

Two thoughts on this: one, this scene was downright cartoonish, but it had a degree of realism that I just found completely hilarious. Look, we all did stuff like that to and with our friends as teenagers. We all had ingrained and ludicrous in-jokes and antics, whether it was literally group-dancing in the middle of a train station or something smaller scale. Two, how ironic would it be if Kitamura and Minorin ended up together? Imagine the melodrama that would cause… I’m kind of excited by the concept. This love quadrangle is already tangled enough, but somehow I want more. 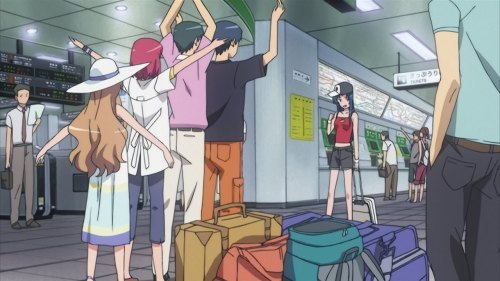 Ami’s beach house is glorious and beautiful because of course it is, though it hasn’t been used for a year so it needs tidying. Ryuji launches himself at the task, because in case you’d forgotten he has the dedication and prowess for cleaning that other male anime protagonists have for mech battles, while Taiga goes down to the beach with the others and starts spooking Minorin out with seaweed. It works, and this would seem silly, except have you ever felt a bit of seaweed brush your foot while you’re minding your own business in the water? Frankly I relate to Minorin a lot in this episode.

Meanwhile, Ami says something cryptic about the student council to Kitamura, and it’s enough to budge his happy-go-lucky expression for a few seconds before he shrugs it off. Now, what’s going on there? Ami is Kitamura’s childhood friend and perhaps knows him better than anyone else in the group (though their actual friendship, like all others, hasn’t really been explored—though at least in their case we know how they met), so perhaps she’s privy to deeper mysteries about his inner goings-on that even Ryuji is oblivious to?

That said, before anything else Ami is still Destroyer of Worlds and Causer of Trouble, so when Ryuji wanders into the bathroom she takes the opportunity to pretend he’s caught her showering and invite him in. She’s actually fully clothed and just cleaning, and finds Ryuji’s shocked and red-faced reaction hilarious. Indeed the poor boy is so flustered that he goes and all but weeps to Taiga, who storms in to reprimand Ami… only to find that this time she’s actually having a shower, and earning a slap in the face for catching her actually naked.

Oh, and this isn’t even the end of the nude slapstick—Kitamura, for reasons best known to himself, thinks it’s fine to wander out into the kitchen only wearing a towel, causing Taiga to basically faint and Minorin to start vocally admiring his Adonis body. Of course he drops the goddamn towel and it has to be rescued by Ryuji, but not before Minorin is reduced to a startled, catatonic state by the sight of “something black and bushy”. Ah, adolescence and the mysteries and increased awareness of the changing body…

When Minorin (and Taiga, who I think passed out somewhere soon after seeing Kitamura’s bare torso) has recovered from presumably her first glimpse of someone else’s downstairs body hair, she and Ryuji get a rare quiet moment to themselves on the balcony. Taiga has been successfully creeping her out with seaweed all day, but Taiga is also recovering from eating too-spicy curry and can’t help him now… so it’s just Ryuji, the girl of his dreams, and the seaside stars. He eventually coughs up the courage to ask if Minorin has a boyfriend, to which she hesitates, then, in true Quirky Minorin style, completely deflects and starts talking about seeing ghosts.

It turns into a surprisingly lyrical monologue on her part, and a shy attempt between them at using “seeing ghosts” as a metaphor for finding love—some people can do it easily, some people don’t even believe it exists, some people say they have, but can they really be trusted if ghosts/love is something so slippery and misunderstood? In the end Ryuji says he thinks there’s a ghost out there that wants Minorin to see it, which is a little clunky, but pretty good as flirting-in-metaphor for a guy under pressure. Minorin, again, pauses then completely steers the conversation in another direction. Which leads me to believe that she’s being deliberately scatterbrained to avoid the topic, and avoid Ryuji’s clumsy attempts to ask her out. Hmm. The plot thickens.

At least, it certainly seems to when Ryuji returns to his room and finds a damp, human imprint in his bed and some long loose hairs. Taiga’s bed, which has a warm dress discarded there, matches, and builds a rather haunting picture. Seaweed ghosts are real, guys!! It looks a lot like the pranksters are getting pranked, though by who, the cliffhanger will not reveal. My money is on Ami, simply because her role in this episode has been a) to keep an eye on everyone and no doubt gather intel about their lovestruck dealings, and b) to majorly screw with people as best she possibly can.

Shame, really—before the hauntings Taiga and Ryuji almost had a sweet little bonding moment where Taiga admitted, thoughtfully, that she couldn’t even enjoy having some time to spend alone with Kitamura because she was so knotted up with nerves. She’s totally comfortable with Ryuji, though. Isn’t that funny? She was repulsed by the idea of moving into a doghouse with him at the start of the episode, but now she might just be realising a doghouse is preferable to a guy who makes her constantly nervous… even more nervous than the prospect of ghosts…

10 responses to “ToraDora! #9: Love in the Time of Seaweed Ghosts”