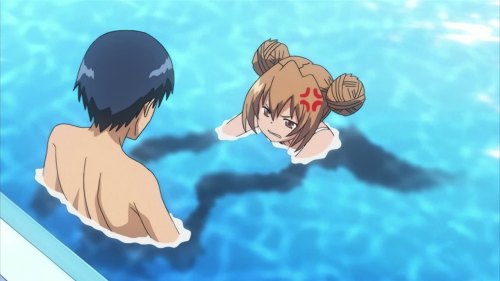 If last episode was all about quiet bonding and emotional expression between Taiga and Ryuji, this one is all about loud bonding and emotional expression. It’s one of the clunkier ones so far, honestly, though the showdown between Taiga and her new nemesis Ami is quite satisfying. And well, I’d say Taiga’s bubble-burst frustrated yelling is probably justified, since she’s been roped into a swimming contest when the last episode clearly demonstrated that she cannot swim. It’s worth noting that the freestyle race was Ami’s idea. Honestly, what else would she pick? This girl hasn’t had a successful day unless she’s ruined someone else’s at least a little bit.

And she seems genuinely intent on cosying up to Ryuji, something that continues to piss Taiga off, which still leaves me wondering if she really does have a thing for him or is just on a deep cover mission to rile Taiga up. In any case, the class dubs the race “the battle for Takasu” and start taking bets on which girl will win Ryuji’s loyalty with their swimming prowess. The agreement between them is that if Taiga wins, she gets to show everyone the footage of Ami doing dumb impressions, and if Ami wins she gets to steal Ryuji away to her beach house for the summer leaving Taiga all alone. Does Ryuji get a say in this? It doesn’t appear so. His sole declaration of agency in the whole business is putting a large bet on Taiga.

I actively dislike any “two or more characters compete for a person like they’re a prize to pick up and carry away” plotline, but like with the photography storyline the show seems to think it’s all in good fun. Ryuji’s reactions are the cinching factor in this case as well, since he never says “hey, don’t you think this is kind of a gross way to act?” and his attitude to the whole thing could be described as “endeared tiredness”. His main role is to teach Taiga to swim, which I suppose is encouraging her to win which suggests he doesn’t want the outcome that treats him most like a candy-filled trophy. And, to Ryuji’s credit, he does tell Ami to stop being such a bully. She just smiles at this. Ami might enjoy his attention, but she’s not here to make friends, she’s here to win.

After a short but honest-to-goodness training montage complete with weirdly Chariots of Fire-esque music and everything, Taiga and Ryuji have something of a poolside heart to heart where he tells her she really can win if she tries. It’s pouring with rain so the place is deserted, leaving it as a somewhat surreal scene with only the two of them and their emotions to occupy the grey-hazed public pool… which is convenient, because Taiga gets so mad she kicks over an entire picnic table and umbrella, and I imagine that would have potentially caused problems for any number of visiting families. Ryuji comments that even if Ami wins and he has to go stay at her beach house (again, still deigning not to mention how creepy it is that he’ll be effectively forced to) he’ll make sure she doesn’t bring Kitamura, so Taiga can spend some time with him over the summer.

Taiga goes pink at this, presumably because she’s flattered/flustered that Ryuji is still keeping up his matchmaker quest, then decides to get stupid angry instead. She accuses Ryuji of wanting to go stay with Ami all along, and how dare he presume that she’d be okay with just hanging out with Kitamura for the summer—how dare he presume he knows what she wants, knows how she feels? For someone else to presume they’ve gotten inside her head is an insult to Taiga, since she admits to not even understanding her own feelings.

And lo, what has been sung throughout both the opening and ending themes finally comes out of our heroine’s mouth, in a display of raw emotion that would be even more poignant if it weren’t preceded by the cartoonish flinging of the beach umbrella: Taiga does not understand her own feelings. Anyone understanding them more than her—i.e. at all—is a huge one-up and a huge loss of power and autonomy for her. And so she pushes Ryuji, who might just be getting close to understanding said feelings, away, tells him he should go to his precious Ami, that she doesn’t care what he does. With these lies hanging in the stormy air, she stalks off and leaves Ryuji equally muddled and frustrated, reduced to doing dishes in the middle of the night out of stress alone.

Ya-chan comes home from work and drops some rare wisdom in her son’s time of distress and need by basically assuring him that Taiga’s lying through her teeth. The girl always says the opposite of what she means, and he should look instead to how Taiga acts. And so it’s quite affirming when, at the last minute like a true star, Taiga arrives to compete in her race against Ami. She’s covered in about a million flotation devices, which somewhat softens the epic entrance, but the gesture is still powerful. And Taiga is definitely here to win, since she throws the classic “your pubes are showing” psyche-out at Ami right before the starting horn goes off.

That would have been enough, but Taiga never does anything by halves, so she also takes the time to undo Ami’s bikini top and leave her half-nude in the pool. Time bought and nemesis thwarted, Taiga shoots off down the pool, leaving Ryuji looking genuinely delighted. She hurts her ankle when she rounds the lap, though, giving Ami time to catch up and Ryuji cause to jump into the pool and help her… which in turn gives Ryuji the opportunity to get knocked on the head when a pair of spectating students who clearly did not learn their lesson from that time a girl nearly drowned throw themselves into the water.

He wakes up flat on his back, presumably brought back to consciousness by a combination of CPR and Taiga shouting to high heavens. Her frustrations have bubbled over again, though this time they’re not at Ryuji but about him—she’s taking everyone in her class to task for being too distracted by Ami’s bikini to notice and help Ryuji, for putting bets on them, for the whole stupid business… and it culminates with her shouting RYUJI IS MINE for the school, the town, and God to hear. Ryuji, as blasé as he has been all episode, simply smiles at this and closes his eyes.

Having got something out of her system with all this, Taiga addresses Ami in an utterly polite and demure manner and invites herself to the beach house. Ami is aghast at this idea, but concedes (with Kitamura’s encouragement) that while Taiga lost the race she lost it because of dire circumstances, so perhaps some allowances can be made. Taiga also takes the time to clarify that when she said “Ryuji is mine” she meant it in the sense of a master talking about their dog, and Ryuji just lets this continued objectification of his existence wash over him as he resignedly sips on a cold drink. Maybe he’ll stand up for himself on the beach trip? One can only hope…

In any case, with the kerfuffle of the Swimsuit Showdown behind us, we’re heading into the summer holiday arc, which I remember really enjoying but don’t remember why, so I’m excited. Stay tuned!