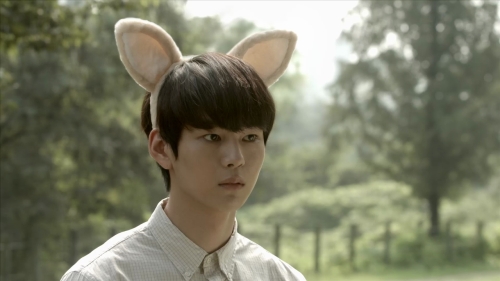 Here is a concept: in every human body there is a Love Cell that enables us to experience romance. Like a muscle that isn’t exercised, if you don’t use your Love Cell it will waste away… and with it, your ability to love, which will inevitably leave you single forever. If this wasn’t a dire enough suggestion, Love Cells are also apparently sentient, and after years of date-less existence Ma Dae Choong’s Love Cell becomes aware of its impending demise and decides to jump ship before it shrivels. This Love Cell makes the mistake of manifesting as a bright pink bubble, attracting the attention of a nearby cat who chases and eats it, leading to a weird magical fusion of feline and fantastical love-causing bio-organism that ends up shaped like a cute girl. Who is not ready to wither, damn it, and so she uses her newfound form to become Dae Choong’s life coach and matchmaker.

I… am a sucker for matchmaker plots. I have no idea why, since they can be downright silly, kind of objectifying (in that the love interest becomes a ‘prize’ to win over), and often reek of Compulsory Heterosexuality. Perhaps they have the guilty pleasure quality of a block of chocolate you eat all on your own, or perhaps ToraDora! made such a lasting impression on my heart when I watched it circa eight years ago, because there’s something that draws me to these often ridiculous plotlines, especially if there’s a supernatural element as there is here.

The Love Cell, now calling herself Nebi, is determined to hook Dae Choong up with the girl of his dreams, undeterred by the fact that Dae Choong is a penniless apartment-dweller and the girl of his dreams is one of Korea’s favourite pop idols. Will she succeed in getting them together? Or will Dae Choong learn something about himself along the way that makes him reassess his priorities? Will there be zany shenanigans?? Like any good chocolate block, these questions hook me every time. 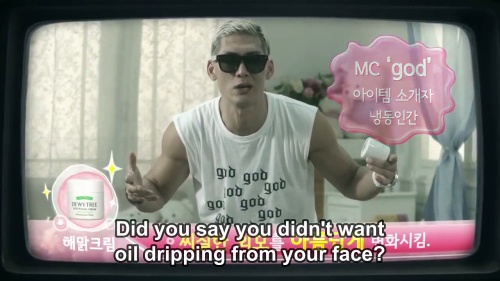 Perhaps I enjoyed this because the girl of Dae Choong’s dreams, Seo Rin, is immediately endearing beyond the fact that she’s the girl of the protagonist’s dreams. The audience first meets her when we cut from a billboard starring her beautiful face to a scene of her messily eating fried chicken in the back of her limo. She was a really fun character, and I liked that even as Dae Choong learnt that she wasn’t perfect he didn’t recoil and stop liking her, in fact he seemed to like her more. There was actually some believable chemistry between those two, which helped balance out the wholly contrived, ridiculous notion that a magical cat girl was trying to get a loser and an idol to fall in love so she wouldn’t die.

This is most definitely a ridiculous show, and it knows it. Nebi helps Dae Choong along in his quest with magical objects, and the show makes the interesting choice of handing the exposition for how they work to inserted TV commercials starring someone named MC God. Who is a buff, sunglasses-wearing blonde man with a soulful voice and incredible screen presence. As well as MC God (I’m not even going to say any more on that, I’m just going to leave you to dwell on the fact that it happened) there’s an awful lot of slapstick humour, complete with zany sound and text effects, which the glamorous Seo Rin is allowed to get involved in as opposed to being sidelined as the straight man while the boys get bopped into ridiculous situations. Combine this with the whole magical-cat-girl-on-a-quest-to-hook-loser-up-with-pop-idol and you have one of the most capital A Anime things I’ve ever seen that isn’t actually animated.

It also falls into the category of easily-digestible, fun shows that get sort of dark when you think about them too much. Obviously it’s a Korean TV show so I can’t cast my own cultural values and assumptions over the top of it, but to me there seems something inherently frightening—to the point where the idea of dying Love Cells may be a scare tactic—about the idea that if you don’t date someone for a certain amount of time you will lose the ability to love forever. Nebi takes Dae Choong to a support group for people whose Love Cells have withered and they are all sad, lonely and bordering on hysterical. There’s a very real sense of ‘you must find a lasting relationship or you’ll shrivel into a husk of a person’ going on here, possibly tied into the Christmas Cake idea (though from a male perspective) that if you’re not married at a certain age you may as well resign yourself to a life of lonesome singularity.

The second season (which shifts away to focus on different characters) brings up the interesting idea that you can store your Love Cell in a bank for a time, so you can get through life without the distraction of romantic feelings, which is quite an interesting twist on the original idea though it’s no doubt proven to be a heartless choice in the end. As well as this, the season one finale throws in the utterly bizarre idea of a Love Cell hunter, who straight up kidnaps and damn near assassinates Nebi. Like, there’s a guy out there who goes around shooting cat girls to turn people into aromantic loners while wearing a slick suit? I have to give the show credit for providing me with a concept I had never before encountered or even thought could exist, even if its worldbuilding gets more baffling the longer you look into it.

Though, to its credit, I really don’t think you’re meant to think too hard about Love Cells. Generally, nothing that stars cat girls (whether they’re sporting ears and tails or not) really asks you to. It was a fun, silly little series with surprisingly endearing characters that somehow moved beyond their archetypes of Dateless Loser, Dream Girl, Magical Love Coach and Romantic Rival—everyone got the chance to be both meaningful and comedic, and Seo Rin and her forbidden but passionate love affair with fried chicken (perhaps a very low-key critique of idol culture, but the show never delves deeper than that) actually remains my favourite aspect of the show. She managed to stay her own person with fleshed-out conflicts and motivations and was never demoted to a prize for Dae Choong to win, and, as these things often delightfully do, the matchmaker quest gained an extra dimension that made it entirely more interesting than just Boy Wants Girl, Magic Cat Will Help Boy.

As long as you don’t think too much about the logistics or deeper implications of Love Cells themselves, you’ll enjoy yourself. MC God guarantees it.