Ghosts with Many Faces: The Intrigue of Pre-Dead Characters 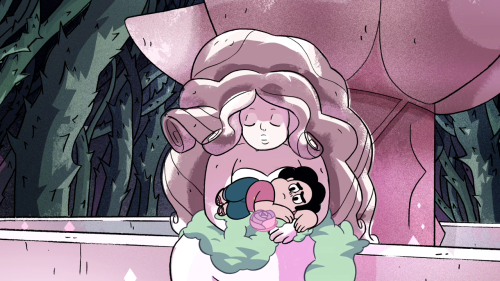 What do Rose Quartz and Rachel Amber have in common? Well, funnily enough, the first part of their names both start with R and the second part shares a name with a natural substance that can end up in pretty and inexpensive jewellery. But first and foremost, of course, they’re both dead before their respective stories begin. Does this mean they aren’t featured or aren’t hugely important? Certainly not—in fact characters that are D.O.A. serve a unique sort of purpose in the worlds of their narrative.

The fanmade visual novel/dating sim Love Is Strange has recently been completed and released (oh, isn’t it amazing what fans can achieve if they’re dedicated to and grumpy with the source material in equal measure?) and I’ve been interested in checking it out for a while, not just because it places the power to cuddle Kate Marsh in my hands, but because one of the love interests is Rachel—someone we never got to ‘meet’ in the canon game because she was missing (and later proved to be dead) before the story began. I’m very interested in how Love Is Strange’s writers will characterise her, given that there are so many conflicting versions of her.

Working out who Rachel is turns out to be as big a mystery as working out what happened to her—to Chloe, she was an angel; to fellow students she was either the coolest of the cool or the biggest and sluttiest burn-out to ever blast comet-like across the campus; to Jefferson she was a desperate plaything; to Frank she was a confident, wonderful partner. It all paints a very conflicting and confused picture.

But this is, of course, the point—one of the big things the heroine of Life Is Strange learns along her time-travelling Coming of Age story is that there are many facets to people, and the version of them you first perceive is most likely not the same as the person they are deep down. See the above examples of Jefferson (cute hipster on the outside, with a warm toasty serial-killer centre) and Frank (scary drug dealer at first glance, but also kind of a softy. These things are not mutually exclusive, as shocking as it may be to Max and to the player). It goes on to prove that you can never really know a person, even if you claim to be the authority on the matter, as Chloe does, who then finds herself shocked and angry to discover Rachel had things going on she didn’t know about.

The fact that Chloe feels so betrayed by this tells you not only something about Rachel but, more importantly in that particular case, something about Chloe—through her relationship with Rachel more and more of her character is revealed, whether it’s her deeply caring side or her deep-seated fear of abandonment. The same goes for Frank as well: if it wasn’t for his reactions to Rachel, even when Rachel is offscreen, we’d never have uncovered that other side of him.

The same is very true for Rose Quartz, who is, if not dead, definitely out of the picture in a permanent sort of way given that she and Steven “can’t exist at the same time”—whatever technicalities, her absence serves not only to gently drive home the message that people are always not what they first appear, but to characterise the other Gems and bring out hidden facets of them. The viewer’s first glimpse of Rose is as a beautiful, elegant and flawless figure, looking regal and serene in her portrait and bathed in praise by the Gems, mostly Pearl.

But as we get more and more flashback episodes and more and more titbits of knowledge about her, it becomes clear that this isn’t the case—we learn she was a warrior who led armies into battle, hardly the epitome of the peaceful mother depicted in the painting, and we also learn that she was hardly serene and perfect—in fact, she was a giant goofball, with obvious flaws in her personality and holes in her logic. These are both as important as each other, even though the fact she was a ruthless fighter probably seems like a bigger deal: it tells the audience that no one is perfect, and how ordinary people can be glorified beyond recognition in death. Rose was not a saint, no matter what Pearl might want to believe. Though the fact she thinks that, and is proven wrong, is just as important to Rose’s posthumous characterisation as it is to Pearl’s.

Because oh boy, does Rose bring out a different side to the Gems—or more specifically, grief for Rose, which is a really important thing for a kids’ show especially to be dealing with. Their grief makes them imperfect too, makes them angry and spiteful and rash, whether it’s Amethyst lashing out in “Maximum Capacity”, breaking through her usual goofy bravado to show that she’s secretly really damn bitter, and will demonstrate it in a mean way, about Rose leaving her to spend time with Greg; or Pearl getting frustrated, desperate, then utterly miserable by turns in “Rose’s Scabbard”, breaking her role as The Sensible One to not only be irrational and emotional but a total asshole to Steven.

Because everyone is capable of being an asshole as much as an angel, and no one has just one side to them—demonstrating this through the conflicting memories and created personas of a dead character is an excellent way to prove this. The tragedy at hand will bring out different, possibly otherwise completely hidden, aspects of living characters that are important for the narrative to explore. Steven Universe is often less about defeating monsters so much as healing them (or at least, that’s Steven’s goal, the dear little dear that he is), and so it’s important to show the protagonists in a healing process as well, which is not always easy or neat. Likewise, Life Is Strange is about coming to terms with consequences and adulthood, and realising that Rachel is dead and not just missing—as well as seeing the different effects she had on everyone—is a very dark and Adult moment that forms a big part of Max’s coming of age.

Not to say that every series should knock off a main character before its story begins (that would get tired as hell), but having someone important that’s dead on arrival can open up unique channels for character exploration, both in the dead character themselves and in what the ripples of their death and the memories they’ve left make of characters that remain. If nothing else, it shows that no one is immortal, but those left behind can, in fact, carry on, no matter what sci-fi or magical strangeness is going on outside of that human heart.

One response to “Ghosts with Many Faces: The Intrigue of Pre-Dead Characters”