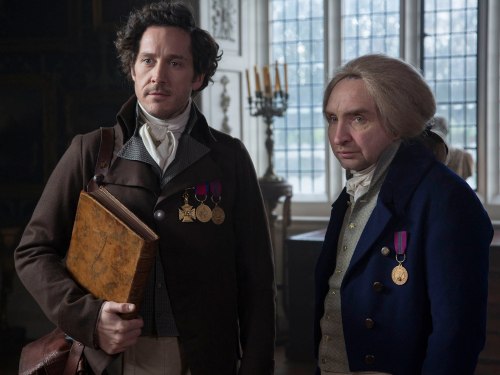 “Can a magician kill someone with magic?”
“A magician might,” he had replied. “But a gentleman never could.”

[Spoilers ahead for the novel Jonathan Strange & Mr Norrell]

I’m packing in my writing degree and starting a study of Theoretical Magic. I can’t say imaginary academia has ever captured my interest as much as the detailed footnotes and references to books and accounts on magic that help build the world of Jonathan Strange & Mr Norrell. Susanna Clarke’s vividly woven alternate history is a fascinating study in slow-burn but effective worldbuilding, but I can gush about that another day—magic has come back to England, and just as it’s blurred the boundaries between wholesome human Earth and the bizarre, terrible nooks and crannies of Faerie, it’s made the nation’s morality a little grey. Or has it?

To backpedal: it’s 1806, and despite once being full of magic-practicing folks—largely due to the country being ruled by a magician king and his fairy army for three centuries—England is now dry of spells and enchantments. Studying the history and theory of magic in England is, however, as much a gentlemanly pursuit as the study of Classical Greece and ballroom dancing. No practical magicians remain… except for Gilbert Norrell, who appears out of the woodwork, slam dunks an entire Society of Learned Magicians into the trash, and makes his way to London to Begin a New Era in English Magic.

He’s a finicky, nervous, haughty and vindictive little bugger, and is keen that he should be the only magician around, and that everyone who wishes to continue studying magic should do it as he directs. When a talented novice named Jonathan Strange approaches, however, Norrell is delighted to have a pupil… though due to Strange being blasé, brave, and equally arrogant and spiteful as his tutor, and with a thirst for a different kind of magic to the one he’s teaching to boot, naturally the two butt heads and end up in a catfight, as well as at opposite ends of a spectrum of magic attitude.

“But have you considered THIS?” [sends a dove fluttering from his sleeve]

The two are very different in their approach to magic: Norrell, as I said before, is stuffy and book-obsessed, and wants to design his own set curriculum of what magic he feels is appropriate to introduce to the wider populace, namely cutting out any except the vaguest, tiniest mention of fairies and the aforementioned immortal magician king. Which makes him a complete hypocrite, naturally, as one of the first things he does to boost the good opinion of magic is bring a prominent politician’s wife back from the dead… by making a contract with a fairy. His method of dealing with it is “well, I just won’t mention it, and hope that nobody asks” and, without wanting to spoil too much, it goes terribly for most people involved (except the fairy, who’s having a great time, but we’ll get to that in a moment).

Strange, on the other hand, wants to push the boundaries—get inspiration from the greats in those books, but take their knowledge and expand on it, try new things, tap into the flow of wild, ancient magic lying dormant in England’s soil, experiment, take risks, blow things up. He also believes magic should be for everyone (even women, which Norrell is opposed to), used whenever it can be, played with like putty. They’re scholar and scientist, in simple terms, and they both do some great things and some awful things.

Their story forms an allegory for the power of knowledge and information, featuring intellectual classism, historical erasure, and fuddy-duddy old men contributing to the death of knowledge and practice… though alongside that, Strange’s brash quest for knowledge also almost destroys his mind, his wife’s life and some of Venice, so it’s not advertised in a particularly glorious light either. The overall point seems to be that neither of them is right.

Magic can do a lot of messed up stuff. Simply by virtue of being a power that can alter minds, hearts, and matter with the right precision and study, it puts a great deal of pressure on one’s moral compass. Do you need to still adhere to the laws of ordinary men if you possess this greater power? Well, you might not need to, but should you? Fairies don’t. Fairies take great delight in filling both the background lore and main story with a series of terrifying tricks and traps that seem put in place deliberately to toy with humans and everything we consider important and nice, whether it’s turning the bricks in the village church to sugar or stealing people away to dance in a dreary, dead hall for hundreds of years. 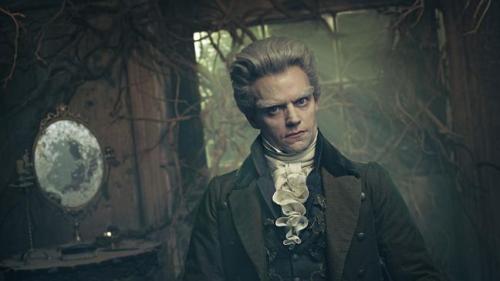 There’s just something otherworldly and wrong about those eyebrows

There’s a lot of questionable business—for example, is sending horrible nightmares to soldiers really any different to the physical torture of prisoners of war? Does it make it okay if they’re sent to Napoleon, who everyone (in England) hates?—but everyone involved seems to draw the line at magic to do with death. Strange and Norrell both bring people back from the dead on separate occasions, and we gather that this is considered Black Magic. Killing someone with magic would doubtless also be the most heinous of crimes, and though he comes close in a moment of battlefield desperation, Strange can’t bring himself to do it. Again there is the question of being presented with godlike power, but choosing, by virtue of some deep-seated feeling, that you should remain among humans and their ethics.

This is neatly contrasted to the fairy summoned by Norrell in the beginning, who only goes by “the gentleman with the thistle-down hair”, and happily partakes in casual murder throughout the book, often recounted in the most jaunty tone. So much is his positivity and playfulness that you almost get the sense he doesn’t think he’s doing anything wrong. Would that be more or less frightening than if he was aware of his evils? Or at least, “evils” by human standards. He is simply acting by his fairy principles, which, while awful to us, are simply the day-to-day for him. Keeping the trapped souls of various humans in his ruined castle, cursed to dance every night for all eternity, is simply his version of collecting trading cards. It’s so alien, but to that character is makes perfect sense. The narrative as a whole, though, moves towards pointing out that this is not really okay.

Saving lost souls is what eventually brings the two magicians’ quarrel to an end, because despite all their opposing views and all the terrible things they’ve done to each other—slander, theft, messing with geography to show off—they find some common ground as well as the remaining shreds of their gentlemanly dignity when they see some magic they agree is stone cold bad. Perhaps there’s something inherently human (and missing from the fairy psyche) that recognises the importance of consent over the soul—it shouldn’t be someone else’s decision to remove it from the body or put it back in, hence magic involving death being considered immoral by human standards.

“With our powers combined, we could have the most fabulous hair in all the kingdoms”

While yes, the gentleman with the thistle-down hair does some utterly horrible stuff, there’s no real antagonist of the novel—it’s all just about the interplay of characters, and apart from universally agreeing that murder is not cool and neither is stealing souls, it rather leaves it to the reader to figure it out for themselves. Is straight-up killing someone justified if it frees you from an enchantment that’s ruined your quality of life? What constitutes “appropriate” punishment for betrayal? Is it responsible to make great power accessible to everyone—and is censoring it and giving it to only a select group any more responsible, or is it just a dick move? Where lies the boundary between a duellist’s honour and regular old bloodlust? Is fairy logic simply a different bunch of brainwaves to ours that we ought to consider and respect, or are there some aspects that are just too Bad on some pit-of-the-stomach level? And where does that feeling come from?

The book never gets so black and white as to say humans are better than fairies—there are outliers in each race that cause equal amounts of horror and trouble. Apart from suggesting that, naturally, murder and messing about with souls is bad, it never takes a stance on which version of magical attitude is the “correct” one out of Norrell’s or Strange’s. Being poles apart, obviously they represent the extremes of each viewpoint—structure vs. wildness, strict censorship vs. complete freedom of knowledge, rigorous attention to theory vs. innovation and experimentation, cautiousness vs. arrogance.

Both magicians leave a legacy, two intellectual factions that bicker, but both are given the gift of magic, and maybe many years down the track they’ll find a happy medium… but the point is, the message the novel leaves you with is that neither school of thought is right and neither is wrong. They’re both as wonderful and dangerous as each other, and if you get completely stuck in the ways of one, you’ll end up just as worse-off as if you were lodged in the other. For a rounded, well-informed magical education you must study the methods and practices of both the founders of Modern English Magic and form your own opinion, whether Norrellite, Strangite or somewhere sensible in between.

And for the love of goodness, don’t mess with fairies unless you really have to, or unless you’re particularly keen to end up as a footnote.

One response to “Strange, Norrell, Magic and Morality”