[This is a collaboration post based on lengthy discussion with WB, who has a lot of very smart things to say. It also contains Until Dawn spoilers]

One thing that tends to pop up again and again in Until Dawn discourse is the injustice that befell Josh Washington: everyone in the group of playable characters can be saved from ruin except for him, and he deserved a better ending. Well, I’m not here to argue that point, because he did deserve a better ending, and a better beginning and middle too, because good God this man is a terribly written character.

I’m not saying there’s no merit to Josh—goodness knows some of my favourite characters are badly composed, but I admire their potential—but everything that he is poses huge problems. On a meta level, obviously he’s a really problematic, stereotypical portrayal of a mentally ill person, adding to the stigma that they’re dangerous torturing murderers who hallucinate vividly, but even just within the game his motivations and character construction are so muddled you have to step back and wonder if that interactive horror story you enjoyed so much actually did make any sense.

Josh is three stereotypes vacuum-pressed into one person, swinging from facet to facet of his patchwork being as the plot demands: first, he’s the lovable joker who just wants everyone to have a good time, then he’s the slasher genre’s classic Psycho Killer, then he’s the traumatised babbling victim of his own mental illness who needs to be pitied and saved. 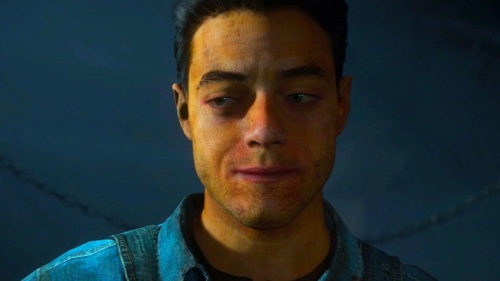 Up until the reveal that he’s the one behind the psycho’s mask, there’s absolutely no indication or foreshadowing that he’s even a bit mentally unhinged, even when there logically should be—for example, if he was having hallucinations that induce the amount of horror and reaction we see later in the game, why didn’t he freak out at least a little when Chris chased him and Sam around in the monk costume? He just laughs it off as if it’s nothing. You could say Chris in a mask foreshadows the fact that the Psycho is one of the group, but otherwise there’s no prior hints before the Big Reveal that Josh is at all psychologically affected, or would do anything so dangerous to his friends.

And why, indeed, did he prey on Chris, Sam and Ashley for his terrifying prank? Sam was the one voice of reason in the case of the prank against Hannah that went so wrong, which Josh is supposedly avenging. Sam was Hannah’s best friend, as the player is constantly reminded, and was the one that pointed out what a mean-spirited thing the prank was. Chris was passed out drunk with Josh, and Ashley, while being involved, seems genuinely remorseful. The ones he should logically have gone after for Mega Revenge would be Mike, Emily and Jess, Mike especially being the kingpin of the whole “you wanna start with a little making out?” operation. Yet he sends Mike and Jess off to a secluded log cabin, very far from the action.

Obviously they end up having an awful time of their own, but that wasn’t part of Josh’s plan, that was the monster subplot. He seems genuinely horrified that Jess has been hurt. He also couldn’t have planned for Emily to set off back down the mountain to search for her bag, also out of his reach, but there’s never any indication that his plot was foiled by her doing so. It entirely seems as though he’s punishing the wrong people and letting go the ones he rightly should feel vengeful against. Unless his whole plan was to make Mike and Jess feel even more guilty when they came back from their night of lovemaking to discover their friends traumatised, resembling that part in Community where Troy comes back with pizza to discover the apartment on fire.

Of course, the immediate answer to inconsistencies in anything Josh does is that he’s crazy. That he genuinely was so unhinged and sadistic he believed that Chris and Ashley “needed a traumatic experience to bond them together”, that he would steal Sam’s clothes and chase her, terrified and near-naked, through the house even though she was supposedly the one he had the most connection with. Look, stop overthinking it, guys. Crazy people hurt and scare their friends! It’s just in their nature, because they’re crazy!

And this is perhaps the most glaring problem with Josh’s character: it simultaneously uses his mental illness as a reason the audience should be scared of him (the Psycho phase) and a reason to pity him (the final act, where he’s been thrown down into the mines). It’s more of a plot device than a part of his character, hence it only surfacing when required, and moving from “scary and violent and craves the suffering of others” mentally ill to “sad and tormented and just needs a hug” mentally ill when Josh is no longer the main antagonist. I’d like to say one facet of his character doesn’t cancel out the other, but again, Josh rockets from one stereotype to another as is convenient to the story, so it barely even seems like Act 2 Josh and Act 3 Josh are the same person.

He’s not so much a morally ambiguous layered character as a bunch of different ideas for a character Frankenstein-stitched together. And he’s certainly not any attempt at a positive, or even philosophical or interesting, representation of a mentally ill character. He’s an ordinary lovable dude bro pal until the Big Reveal, then he babbles in slurred speech and lashes out verbally and physically against his friends, and that’s all after the mask has been taken off and we’ve discovered he quite happily and meticulously planned the mental torture of his best friends as well as physically assaulting them (not to mention sexually harassing Sam by stranding her in just a towel and filming her in the bath). 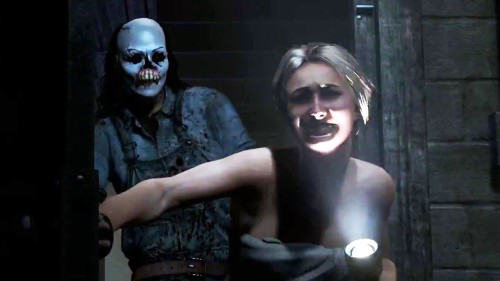 By then showing us how much he’s suffering, via his hallucinations and breakdown in the mines, it kind of feels like the game is not only using his illness as an excuse for his behaviour but is asking us to forgive him for it. Because he’s crazy, right? He’s just a mixed up kid who’s having a bad time. Having left off on this version of Josh, it’s little wonder a lot of people clamour for “a better ending” for him, often with the argument that Until Dawn is spreading the message that mentally ill people are doomed and cannot be saved.

And while that is a negative message, I feel like it’s drowned out by the even bigger, more over-arching messages beamed throughout the rest of the game, which isn’t even a message so much as a mess of bad, deeply-ingrained stigmas. I don’t believe that the writers had any malicious intent to tell mentally ill folks that they’re doomed to die or turn into a monster, because I don’t believe they even really consider mentally ill folks as ordinary people that really exist, or at least, have made absolutely no attempt to write a character that represents them in any vaguely clever or positive way.

Until Dawn is a homage to the slasher/horror genre, which is a perfect opportunity to play with its tropes and silliness, but instead—in so many ways, which I will no doubt get to in other posts—it plays into them every chance it gets, where it would have been quite interesting to explore, take apart and subvert the things that make them tick and build a more progressive story. But alas, we’re left with the wreckage of Josh Washington, funny friend, murderous villain, stammering woobie, wendigo. Josh could only have had a better ending if he had existed in a story with better writing. Rest in peace.

Tagged as character studies, Until Dawn