This episode answers a few burning questions, but ultimately leaves me asking more. Chiefly: what fresh Hell is this?

We pick up where we left off last time, in a new timeline where Chloe’s dad is alive (thanks to Max and her meddling) but Chloe is paralysed and on constant life support. Victoria is Max’s bestie (the horror), Chloe and Rachel never met but Rachel is still missing, the snowstorm and eclipse still happened which means the oncoming storm is probably still a thing regardless of the alternate universe we’re in. Chloe’s father never died, so the family probably had more money, enough to give Chloe a car for her birthday… which then got wrecked by an SUV, breaking Chloe’s back and leaving her as she is. Cause and effect. Butterflies and junk.

The first segment of the episode is incredibly sombre compared to other ones, quiet and subdued as a hospital ward as Chloe and Max talk—the most Chloe reckons she’s talked all year, having little company but her parents and nurses—and fall asleep watching Blade Runner. Max takes the time to speak with Mr and Mrs Price and set up more knowledge about their hard life in this new world. They’re struggling, emotionally and financially, but they’re together. It’s almost making Max wonder what version of events is genuinely better, but Chloe seals the deal when she asks Max to kill her.

She’s overheard doctors saying she’s not getting better, in fact her respiratory system is beginning to fail. She’s on life support but it’s barely a life. Chloe felt human for that night she spent with Max, and wants it to be her last memory. End on a good note. And she trusts Max to do what’s right for her, when her parents won’t listen to her wishes.

This game keeps pulling up these massive issues like suicide and drugs and voluntary euthanasia, and as it’s all in the player’s hands, so you can’t deal with them passively. I’m still reeling from having to talk Kate out of killing herself—and failing—and then suddenly we have to make this choice. Which, again, is something people out there have to deal with every day, and I myself have been fortunate enough not to, so I can’t fully judge how well it was done. I feel like the weight of the matter—choosing whether you let your loved one live on in pain just so they can live, or letting them be at peace—is still present even without the time travel element, so that has pulling power at least. I think the entire sequence with Chloe was heartbreaking, from a cinematic point of view. And it shows Max what she has to do.

She picks up the photo she used to time travel and jumps back to that moment for the second time—there are no options for this, unlike answering Chloe. We refused to overdose her, but in the end the outcome is the same: Max sees that this is not the happy world she wanted to create, the happy, safe life for Chloe, and so begrudgingly she goes back and lets Mr. Price walk out the door to his death, resetting the current timeline. It’s not perfect, but at least Chloe has a better quality of life. God, what a choice to make. Max declares she can never tell Chloe about it, and soldiers on with a whole new barrel of trauma and heartbreak to do some mystery-solving.

At this point I have to stop and say I felt an ache in my chest through all of this, because I am hugely invested in Max as a character. She’s our eyes and ears in this world, but is by no means a player avatar or a blank slate, and it’s been lovely to see her develop and strengthen as a person through all her experiences. She’s already been through enough to fill several coming-of-age novels, and I have no doubt there’s a world more of trouble and awfulness and learning about the world to go, and I’m really excited to follow her and see how she continues to grow.

We sneak into Nathan’s dorm and Max steals his phone, we talk to Frank and extract his drug deal log book managing to only stab him in the leg in the process (I say “only” because apparently you can mess up real bad and kill him), and scrapbook together some info David has already gathered. The further along we go, the more it looks like David is not actually such a bad guy, or at least, was never intended to be an antagonist—he’s just a bit of a surveillance nut because he wants everyone to be safe, and gets a tad carried away playing cop. This proves useful though, as Max finds significant clues (among them are photos of Nathan driving an SUV… didn’t Chloe get hit by an SUV in the other timeline? I wonder if that’s connected… ), to piece together a rendezvous address which is, of course, a creepy, creepy barn. 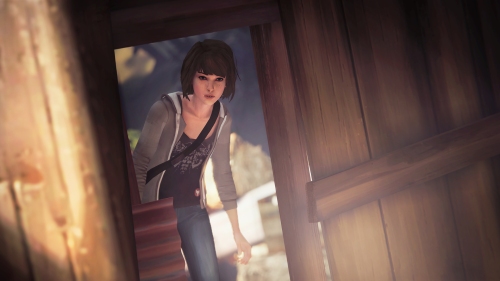 A creepy barn that the Prescott family owns, though, so as they rifle around (silent backstory and clues! You have to examine everything!) Max and Chloe learn a little of the history of Arcadia Bay’s richest and nastiest entrepreneurial clan. Put together with angry emails from Nathan’s father, and concerned ones from his psychiatrist, it begins to transpire that Nathan is perhaps not as in control of his perfect life as it may seem. Just as you begin to feel sympathetic for him, though, Max and Chloe find their way into an underground bunker that seems stocked for the apocalypse… as well as doubling as a photo studio. Stacked full of folders of pictures of drugged teenaged girls.

Including ones of Rachel and Kate, arms duct-taped and expressions groggy, among countless others… and an empty folder with ‘Victoria’ written on it. So we have found our serial doser and kidnapper, and apparently identified his next victim. Somehow, this was not what I was expecting, but I’m grossed out to say the least. And suitably chilled as Chloe finds a photo of Rachel being lowered into the ground. They race to the junkyard to that spot, which Chloe recognises because it was her and Rachel’s sanctuary and secret hideout, to find her buried there. Oh God.

Something makes me want to call this a conspiracy bigger than just Nathan being a creep, but maybe that’s just my pet theory that the kidnappings and folder keepings were part of a search for a girl with time travel powers, and/or keep tabs on the Blackwell girls to wait for one to appear. There’s only one way to find out, says Chloe: bust the case wide open, with her fist, in Nathan’s face. Good plan kiddo. Dangerous, reckless plan that involves us bursting into a Vortex Club party (maybe I’ll understand what those actually are now) with all the grace of a machine gun, sure, but there’s no stopping Chloe when she’s emotionally volatile like this. Her best friend (and possible lover? Unrequited crush?) has been buried anonymously in a dump. No wonder she gets tetchy when Warren wants to take a selfie with Max.

Warren remains invisible unless the plot physically requires him, by the way. He beat up Nathan a bit to protect Max and Chloe but then got immediately sidelined. I’m still laughing, albeit in a slightly annoyed fashion. What’s the point of his character at all, again? Is he really no more than a meat shield and proof Max has more than one friend?

Anyway, the Time Team head into the party, which is being held in the pool. Literally who thought gathering large groups of intoxicated teenagers and electronic equipment around a large body of water was a good idea? They should be fired instantly. And I have to assume there’s some sort of faculty involvement because Jefferson is there, using this booze-up as a platform to announce the winner of that photography contest I completely forgot about. Nope, sorry, I still don’t understand what the Vortex Club is. Except that there’s a VIP area Max needs to sneak into to find Nathan, which she does not, but gets snubbed by Victoria instead.

She takes the opportunity to have a heart to heart and warn Victoria about Nathan and drugs and ominous folders with her name on it, and because we were nice to her in episode one Victoria believes us and promises to be careful. Hooray! We bonded with the Queen Bee and she developed a bit! Not as much as I was hoping, but we get a tiny glimpse into Victoria’s inner workings. Again, though, I have to wonder if she’s got her own investigative angle, or if she’s legitimately just schmoozing up to Jefferson because she wants to win the competition and get famous. She does win, anyway, but Chloe drags Max away before they can join the celebrations (why are these kids celebrating a photo contest at a pool party anyway??) because Nathan has sent her a text saying there won’t be any evidence of Rachel left soon.

Naturally, they run back to the junkyard, where mercifully (given the circumstances, anyway) Rachel’s body is still in the ground. Max is just breathing a sigh of relief when a needle comes out of the darkness and stabs her in the neck. She topples in shock. Chloe gets up to cry out and is cut off by someone shooting her in the head.

Blearily, through a drugged haze that definitely makes time rewinding impossible, Max stares in horror at her fallen body… and up, as their attacker stands over them looking sinister. It’s Jefferson.

I knew it. I knew there was something I didn’t like about him. I thought it was just his pretentious attitude and the fact every single character admired and adored him, but no, he’s a murderer. And fade to black and credits.

What fresh Hell is this?

2 responses to “Life Is Strange #4: Paying the (Chloe) Price”