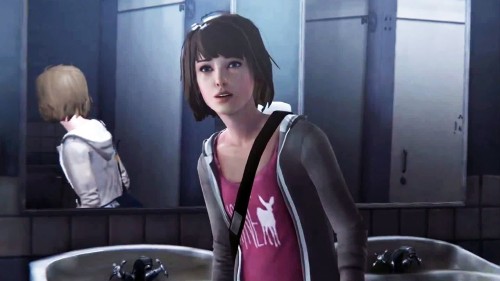 You wake, disorientated. Around you, a storm rages. If you can only get to the lighthouse, some whisper of groggy logic tells you, you’ll be safe. But once you reach the seaside tower you come across nothing other than a hurricane ripping across the ocean towards you, hurling a boat that near cleaves the lighthouse, your sanctuary, in half—

Psyche! You’re actually in an incredibly uppity photography class. Sure hope that was a daydream and not foreshadowing!

Righto, cards on the table: I know Life Is Strange is a game and not a show, as this review category usually denotes, but it’s set out so cinematically—and arranged into “episodes” to boot—that I feel it can very well be reviewed as you would any visual story, the twist being that this one is a tad more interactive than your average movie. Since I’m not familiar with video games as a medium I’ll be reviewing elements I’m familiar with like story, character, scripting, and the hilarity that in-class selfies are a legitimate plot point.

Really though. One of the options Our Heroine Max is faced with when she returns to what is assumed to be the real world—among helpful backstory-building tasks like flipping through her journal or text messages—is pick up her Polaroid camera and take a picture of herself. Given how many attempts it usually takes to get a satisfactory selfie, I’d say using film is not very cost-effective, but it seems Max attends a school entirely for artsy types so maybe it’s acceptable.

It draws the class’ attention to her, though, and Max is put through ridicule by both her teacher Mr. Jefferson (who is hilarious to me, mostly because I wrote all my teacher characters’ dialogue like “Ah Miss Caulfield I see you have decided to rejoin the world of the living, snort” when I was a teenager, despite having never met one that spoke like that. I still haven’t. Maybe they do in America though? Anything’s possible in America, or at least I’m sure that’s what the fifteen-year-old writer thought) and his star pupil Victoria, who is, according to Max’s thoughts and the gossip of other students should you choose to engage in it, tooootally flirting with him. Scandal (no, really. This is wrong and creepy).

It transpires that there are several wrong and creepy things going on around the place, and not just Max’s out-of-body experience in the middle of class. The school halls are plastered with Missing Persons posters for a girl named Rachel Amber (who was probably shipped off for the crime of having two first names), Max’s friend Kate is being harassed and bullied for undisclosed reasons that have something to do with teen abstinence, and when Max holes up in the bathroom to try and regain her cool, somebody gets shot.

A beautiful and no doubt symbolic butterfly flits through the window, and when Max ducks behind the stalls to try and capture it on camera, two students burst in: a boy who I know I’m supposed to dislike because he’s dressed like a preppy jock, and a girl who I know I’m meant to think is edgy because she has bright blue hair and says “hella” a lot. She’s demanding he pay her, he’s freaking out, and suddenly the jock pulls a gun. After a scuffle, the girl ends up shot in the gut, the boy flees, and Max freaks out so much she… hurls backwards through time and finds herself in photography class again.

That’s right! This is a story about time travel and I am so here!

Max uses her newfound powers for reasonable and relatable things: deciding she must go back and save that girl from getting shot, and telling Mr. Jefferson exactly the answers he wants to hear so he thinks she’s cool and smart. Having escaped from class with her dignity intact (it can take a few time rewinds) Max rushes to the bathroom and voila, the same events play out: butterfly, jock, punk, gun, except this time Max sets off the fire alarm before he can shoot. Everyone evacuates, including the two tussling students. Day saved! Except that Max has opened several cans of worms, both by witnessing what she did and also, you know, time travel powers.

The jock, Nathan, is from a “family who owns half of the bay” (of course they do), so when the principal catches Max loitering after the other students have fled, she wonders if it’s really the smart thing to do to report him. In our game she did, because telling the truth and seeking help from authority figures is always good. Well. We hope so.

With the principal and security guard alike eyeing her retreating back, Max is unleashed onto the school grounds, where she can mingle with students as she pleases and gather intel about Rachel Amber, something called The Vortex Club which is, I gather, where all the Cool Kids hang out, and Jefferson, who is allegedly a famous art photographer from back-in-the-day that Max really admires. We also run into Victoria and her posse (they come in threes, a la Mean Girls) and can use time travel shenanigans to dump paint on her, explore Max’s dorm for more silent backstory (what I shall call anything discovered via objects you can examine, as opposed to things said out loud), and eventually meet her best bud Warren, who is every Nice Funny Geeky Guy Friend ever and I just know is going to turn out to have a crush on Max because that is the way this game is using stereotypes so far: reliably.

Max is about to unload her big stressful news—that, you know, she can now rewind time at will—when Jock Boy rears his greasy head and starts hounding Max for telling the principal about his gun-wielding activities. Warren does his best to stand up for her, but the real hero of the moment is the blue-haired punk, who screeches across the car-park in a pickup truck. She and Max know each other, they realise now that they’re meeting face to face, and boy do they have some baggage, but there’s no time to talk—get in the car if you want to live!!

Blue-punk is Chloe, who you will recognise from Max’s journal and an old “BFF” photo if you’d been hunting through the silent backstory. She’s gone a bit off the rails since Max and her family moved away, and is living with her “step-douche”—the gruff security guard from school!—and smoking a whole lot of weed. She was also the one who printed all the posters trying to find Rachel Amber, as they became very close after Max moved and Chloe’s family life spiralled downwards. And she says “hella” an unreasonable amount. Like, I’m sure people say it, but as I understand it’s originally a California thing and these guys are in Oregon or somesuch. In general a lot of the dialogue can lean towards the awkward side, whether from strange syntax or the obvious intention of adults to sound like teenagers.

In any case, things are tense between Max and Chloe, and it plays off pretty convincingly as the strain between two people who loved each other when they were young and have been pried apart by age and time and circumstance. I’m really interested in their history, but unfortunately you don’t learn much about it from Chloe’s room, which naturally you rifle through. Silent backstory, guys! You have to pick up every item! If you break anything you can just rewind time… 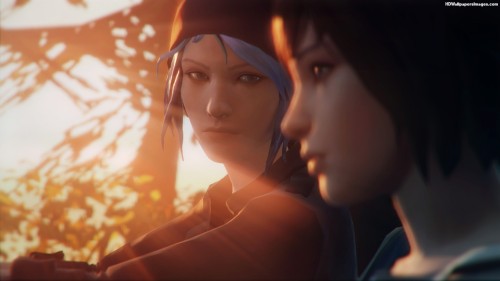 And it’s Chloe Max ends up telling about this, after they ditch Chloe’s place (and the security-dad… who Max discovers has CCTV cameras all over the house. Oh) and have a heart-to-heart by the lighthouse. Chloe confides that Nathan was after her because she essentially blackmailed him, after he drugged her drink at a party and was next seen crawling towards her with a camera. There’s no discussion or implication that he did anything more than that but it’s still shiver-worthy, and I’m glad it’s not just passed off… though it tells you something about Chloe’s attitude to law and self-preservation, respectively, that her first instinct after escaping is to threaten to tell everyone unless her assaulter coughs up cash.

As if this wasn’t all awful news enough, Max then lurches back to the storm-world the episode began in. And there, picks up a newspaper with… that Friday’s date on it! Has she travelled to the future? Is this a sign of events to come? Chloe naturally is like “dude what the hell you totally blacked out!” and Max tells her the truth about butterflies and time reversal and storm visions in a panic, at which Chloe asks if she’s high, until snowflakes begin to fall. Unseasonably, I am assured by the characters. Something is not right. Hell, there’s enough messed up crap going on without the supposed pending end of the world…

Given all those messages of “this action will have consequences” that have fluttered in the corner of the screen (a butterfly’s wing can cause a hurricane, after all), I’ll be interested to know if the bay-destroying storm is something Max has created by messing with time, or an inevitable doomsday, or something she can maybe work to prevent. Either way I’m always up for stories that play with time travel and time travel that plays with people and their relationships, so having mostly avoided spoilers I’m going to surge ahead. So far it’s an interesting story that’s built a lot of intrigue so I’m quite excited to see what happens, both on the supernatural and ordinary fronts, because woo-wee there’s a lot going on here.

And maybe there’ll be more lines like “go fuck your selfie”, which is simultaneously the best and worst piece of dialogue ever written.

7 responses to “Life Is Strange #1: Selfies and Chaos Theory”