My Way or the Hemingway: A Clash with Classics Part 2

There are possibly no two “classic” novels more different than Jane Eyre and The Sun Also Rises, and reading them one after the other gave me what I can only describe as literary whiplash. One is a Romantic, emotional and wordy “history of a woman’s heart” with good spiritual Victorian values, the other is a modernist, minimalist, hyper-masculine grit-fest about how everyone’s constantly drunk and sleeping with each other in a godless world.

Hailed by some as the greatest novel of the 20th century (whether or not I feel like it deserves that metaphysical medal, we shall get to in a moment), Ernest Hemingway’s first book drops the reader with no hand-holding, help or description beyond utter scene-setting basics in 1920s Paris. Our narrator is Jake Barnes, a World War One veteran who suffered an injury in combat that (though again, never actually described) seems to have damaged his genitalia. In the midst of a new, modern culture where everyone’s throwing off the values of the past generation and having affairs in all directions, it’s just one of the reasons he feels a little disillusioned and fed up with the state of things.

Again, not that you’d know. Hemingway’s major claim to fame is his ‘cut back to the bone’ writing style that wastes not a single word, and leaves an awful lot unsaid. The reader is left to gauge the hidden depths from observing the action and dialogue, which on one hand is quite clever, but on the other can be infuriating to read. This is a personal beef of mine, I must admit, because I’m not at all fond of minimalism, but there were some scenes where the short, punchy ‘this happened. Then we did this. Then there was dialogue for eight lines with no tags so you didn’t know how anything was being said’ sentence layout was nothing short of grating. I’m all for cutting out unneeded wordy words and streamlining prose, but in many cases the resulting hidden depths were too hidden and I couldn’t see them at all, leaving the characters seeming bland and basic.

Plus, he contradicts his own ‘waste no words and keep it short and meaningful’ rule with this gem:

That’s a 50 word sentence, and about half of those words are “ferns”. I feel like if I handed this into a publisher now it would have the living daylights edited out of it, if not be cut completely. Though perhaps I’m missing the hidden significance of preserving trout and it’s actually a really important symbolic part of the novel and Jake’s progression as a character. We’ll never know. Iceberg Theory.

Of course, the minimalist style (with weird attention to detail in certain seemingly random moments, like said mess of fish and ferns) makes perfect sense if you consider that it’s a roman a clef, fact thinly veiled as fiction—if we read it as Hemingway’s own recollections jotted down as a memoir with the names changed, and not as a novel, the voice rings truer. Your memories don’t generally come packaged in prose, unless the scenery was particularly lovely, which is why the closest The Sun Also Rises gets to lush and descriptive is when it’s detailing the landscape of Spain.

If we read it as Hemingway’s fictionalised account of real events, it also reads as notably more spiteful, particularly in the case of Robert Cohn, reportedly based on a real friend of the author’s who got with the woman Hemingway wanted to get with. Robert Cohn, for reference, is the punching bag of the entire novel, described as an idiot by the narrator and complained about and picked on by virtually every main character. 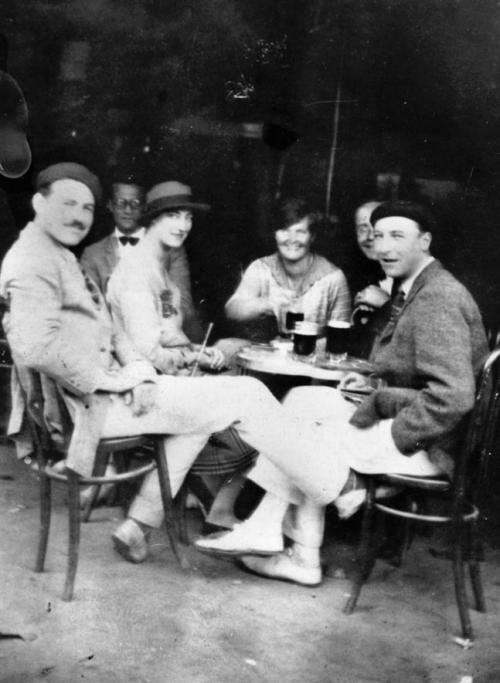 Hemingway, and the group who inspired the characters in the novel. His wife (centre, without the hat) funnily enough does not make the slightest appearance

And then there’s Lady Brett Ashley, almost a caricature of the modern woman, a flapper with a bob, a taste for alcohol and partying, and an apparently insatiable thirst for unattached sex. She and Jake are in love, apparently, but she laments that they can’t be together because his ambiguous groin injury means they can’t do the horizontal mambo. And this, of course, is everything that makes a relationship meaningful.

To fill this void (euphemism not intended) Brett gallivants about in all the joys and woes of promiscuity, which is her version of everyone else’s haphazard attempts at hedonism to compensate for how awful they feel. I think. That’s what I got from peering beyond the tip of the iceberg, but I never have been very good at seeing underwater, and the chill of this particular sea gave me a headache worse than the hangovers every single character must have been experiencing, all the time. I don’t know how much alcohol is consumed in this novel, but it’s an absolutely terrifying volume no matter how you measure it.

Which, of course, is quite an accurate picture of the era, which is possibly why this book has stuck so hard and fast in the collective hearts and minds of those who point to things and declare them “classics”. The world was a damned mess post-WWI, as were the people, leading to this “Lost Generation” who realised that life as they knew it was never going to be the same, but weren’t quite sure what to do about it. As a peek into the 1920s (and we know it’s accurate, given its autobiographical nature) it was fascinating to me. As a novel, though, I found the entire thing vaguely obnoxious.

I did mention before that I have precious little respect for Hemingway, and that opinion unfortunately has not changed. I believe in separating the author from their work (I mean, F. Scott Fitzgerald was also a pretentious, sexist Jazz Age twit, but I can appreciate his prose as a separate entity), but you just can’t extract Hemingway himself from this book. This aura of snobbish, self-congratulatory phallic ridiculousness permeates all of his work, combined of course with ingrained racism and misogyny.

If Brett Ashley is based on the woman Hemingway fancied, I’m frankly a little worried, because she’s hardly a tribute. In fact she’s one of the most nasty and flighty characters in the book, arguably the one that embodies this new jazzy era (being the quintessential flapper, and all that) and the poster girl for everything that’s wrong with it. Oh, she’s an interesting character, but I’d want to explore her in a novel that doesn’t portray her as a shameless tart who uses people, ruins holidays, and ends up simperingly calling for the protagonist to rescue her and declaring herself a bitch (which he does not correct).

Maybe, though, I’m missing the greater point of this all, because it’s veiled in the magic of minimalism. And hey, that’s fine, and many people may love it, but it’s a style that just doesn’t gel with me, especially when combined with the bluntness that is often Hemingway’s subject matter. “For sale: baby shoes, never worn.” That’s because you told the mother to “let the air in”, you sack of crap!

Even if I haul myself away from my intense personal annoyance at all the sexism, racism, and even, for bingo, homophobia, in this book, and my subjective dislike of the style… I could not like this novel if I tried. I found myself morbidly curious by the escapades in Paris, but that’s mostly because of The Sun Also Rises’ credit as a historical document. As a story, it’s incredibly self-indulgent and at times genuinely badly written (that goddamned ferns sentence will haunt me) and full of characters who are either so aloof (see: Jake, our first person narrator, who barely lets us into his head) or so awful (Brett, Michael, basically the whole squad) that the reader has trouble connecting with them. I’d say the appeal was the schadenfreude of watching them all descend into a bickering cloud of broken hearts, a symbol of the ruin that this new era has brought, but half the book seems to be Jake telling us what fun he’s having on holiday.

So, I’m not well-read enough to tell you what the greatest novel of the 20th century is, but a chorus of literary angels did not rain their golden light on me while I was reading this one. Fair enough, you know, because it’s a first novel. They’re not always your best, and are often (statistically) in some way autobiographical. Yet here we are, with The Sun Also Rises in the spotlight of classical acclaim, and no matter how hard I try I can’t quite figure out why. Surely Hemingway has better books? Please, for the love of everything, tell me he does, otherwise why the hell are we talking about him at all?

4 responses to “My Way or the Hemingway: A Clash with Classics Part 2”