So, remember how last time I speculated that the War would change with the loss of a common universally evil enemy? The morally grey in-fighting wastes no time kicking off as Kayneth uses his first outing from his sickbed to murder the judge. I guess being on the receiving end of a gun made him appreciate their power more…

Before he offs Father Risei, however, he takes special, smarmy care to get the extra Command Spell that was promised to the team who took down Caster, because, like, Saber did the actual cool work, but Diarmuid helped. Prize gained and smoking gun in tow, Kayneth drops his mask of diplomacy like a hot potato and wheels away to get back to being an absolutely awful person. He has every reason to be cranky, though: he returns to the base to discover that Sola is missing.

His wayward fiancée was last seen, by the audience at least, standing on a rooftop gushing to no one in particular about how happy she is that she’s going to get that extra Command Spell. Because then she’ll have full control over a powerful magical spirit and have the agency and situational control that’s been denied her for so long in her hands, and will finally have a leg-up in the classist and misogynistic world of mages? Well… if that is on her mind, we don’t see it, because her first concern is apparently that she and Diarmuid will be “wholly connected”. Oo-er.

Her flush-faced pining for her hunky Servant is cut off, though… when Maiya appears out of nowhere and does the very same thing to her arm. Again, of all the things to be immediately horrified about given the impromptu amputation of a vital limb, Sola’s first reaction is to shriek that she needs that arm to command Diarmuid! Obviously, it’s her one connection to power in her blackmail game with Kayneth, and also, her arm, which she uses all the time, but the focus is her cursed crush once more. If it’s not obvious, I’ll get to why this sucks in a moment. This is an episode where a lot sucks for a lot of characters, so we have quite a bit to cover.

It seems everyone’s true colours are coming out in this time of stress, because Kayneth turns his horror at his fiancée’s kidnapping into an excuse to snap and snort at Diarmuid about seducing her. Kayneth accuses him of enticing her into the contract and repeating the very notorious, life-ruining, loyalty-destroying womanising ways of his legend, which he had been trying so very hard to move past. Diarmuid looks nothing less than heartbroken as his Master tears him down and insults him in every possible way. When he senses and enemy Servant, he springs up to try and scrape his dignity back together, but it’s clear Kayneth’s wouldn’t be impressed if he brought him back the moon.

Diarmuid gets the first pleasant surprise all episode when he discovers that the approaching opponent is Saber, who has quite rightly guessed that everything’s going to go to Hell via express post now that Caster’s gone. This is a chance to finish their duel, on their own terms. When he asks, she and Iri don’t know anything about Sola’s whereabouts, and he knows Saber can do no wrong of course, so they square off and begin another beautifully choreographed fight.

He notices that despite her injury being healed, Saber’s only using one arm. She declares that he’s only got one spear, so it wouldn’t be fair to come at him with full strength when he’s handicapped, and Diarmuid looks like his soul is about to ascend from his beefy body with pure happiness. Again, I have to notice how the way he’s drawn has changed: he’s softer round the edges, smiles far less cockily, and looks practically angelic when he tells her he’s glad that they met. And this line is dropped as the music swells and before he sweeps back in, ramped up on chivalry and honour and friendship, practically grinning, to battle with the epic score blasting. And it’s a truly incredible shining moment, so naturally everything is ruined a second later.

Who should materialise out of the shadows but Kiritsugu, with a semi-conscious and one-armed Sola at gunpoint? The last of Kayneth’s snobby bravado evaporates, and when Kiritsugu slips him a contract on paper (Kiritsugu has already signed his half of the bargain, in strangely adorable curly print) he’s horrified, but clearly feels he has no choice but to agree to the terms… which turn out to be interrupting Saber and Diarmuid’s happy duel. Lucky he got that extra Command Spell…

This franchise does mood whiplash more than is sensible, but in this case the tonal shift from the golden bravado of the fight, to the suspenseful hollow of wondering what’s gone wrong, to the chilling reveal that Diarmuid has speared himself through the chest, is masterfully done. The world stops. The air chills. Through the silence, Kiritsugu’s voice announces the until-now mysterious terms of the contract: Kayneth and Sola will live, but only if they forfeit the War and order their Servant to kill himself. And then there’s this skin-crawling, guttural noise of pain and despair from the previously delightful Diarmuid, as he falls to his knees, impaled and spitting blood (and bleeding from the eyes, and whether or not that’s medically accurate it certainly serves for effect) and disgust. 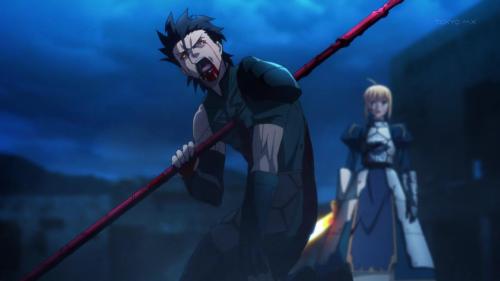 Kayneth, Saber and Iri can only stare as Diarmuid shouts rage and vengeance and how they’re all awful, terrible, honour-void people who would dare take away the last shred of hope he had for their own selfish gains. And howling like a demon, he disintegrates into thin air, leaving blood and doom behind.

It’s not the last of it at all, though—bullets rain sideways and blow Kayneth and the comatose Sola to the ground, and Kiritsugu stands there smoking and calmly explaining that the contract only said he couldn’t kill them. Though it’s really a loophole one ought to consider, nobody counted on Maiya, his faithful, blank-faced assistant. Kiritsugu can’t even kill Kayneth when he’s literally begging for death, and leaves the task to Saber, who puts the formerly haughty mage out of his misery.

Well. That was emotionally exhausting. Time for ten minutes of philosophical dialogue.

Saber, quite rightly, demands to know what the hell her Master thinks he just pulled, and Iri is quite shocked with her loving husband as well, as you would be having just seen him aid the ruthless murder of three people in the space of a minute. Kiritsugu is a stone wall to their worries, turning his back and simply stating, a touch bitterly, that Saber’s a tiny armour-clad hypocrite for telling him he’s being unchivalrous. Chivalry is made up, he argues, as a false golden sheen to distract people from the horror of war. Because of the gleaming, pure image of knights and their glorious ilk, billions of people have gone to their deaths blindly believing that war is something other than humanity at its worst.

It brings all the thematic banter about knights and assassins, and the conflict between Saber and Kiritsugu, to a head, and frankly it’s one of the sharpest and most poignant bits of dialogue in the series (and is that one that everybody quotes, because it encapsulates the series’ themes wonderfully, as well as being suitably gritty and evocative as a soliloquy), but it has to be noted that the way it’s presented is a little awkward. Basically, nobody moves for the rest of the episode. I guess they used up all their budget on animating the fight, because the remaining characters may as well be sock puppets.

The most movement we get is Kiritsugu turning around shooting a genuine glare at Saber when she accuses him of losing faith, suggesting that he must have believed in this once, must once have wanted to be a hero too. Touched a nerve, did she? He’s human for a tantalising second, another bright flash of unrestrained emotion showing through and getting past his stoic exterior. He’s back to being blank-faced and gritty in a matter of seconds, though, and rolls out with his partner in violent crime to an undisclosed location, probably to cause more calculated chaos. As if we needed something else to emotionally uproot us this episode, it ends with Iri fainting to the ground, and Saber shouting her name in fear.

This is simultaneously my most and least favourite episode. On one hand, I get all weepy because one of my faves was killed in the most gutting and tragic way possible, but I got that out of my system a while ago, so let’s talk about the myriad of other things that are going on. This is the episode where the bass drops and things take a dive from fun epic adventure of wizards and mythological figures bantering and dueling into a battle of life and death. The Grail War is not a happy place, and there can only be one winner, and with the common enemy removed it’s dog eat dog. And the atmospheric shift—which you can feel like a physical thing in the scene of Diarmuid’s death—is handled well, and the philosophical dialogue brings up some excellent points that are consistent with the themes of the show, and the audience is left to ponder as we move head-first into what we can expect to be an intense second season.

However, we also get the utter bullshit that is the end of Sola’s arc, which was not even an arc so much as the vague potential for one that sputtered and fell face-first into lazy tropes. She was a threat and an interesting insight into mage politics for about five seconds, but in the end was simply Grainné 2.0 for the purposes of legendary parallels (not that they weren’t clever, they just could have done so much more) and someone for Kayneth to crush on so he’d have some humanising qualities. I don’t want to be that person who reads into moral messages that might not be there, but the fact that she gets horribly wounded and then killed while displaying Squishy Girly Feelings could be an exercise in damning womanly lust. It’s like in horror movies: don’t be a slut, or you’ll be one of the first to die.

And all this demoralising death and pain (did we really need Kayneth to be so broken that he begged for the end?) and waste of character makes a tremendously downbeat ending, obviously—“there is no hope on the battlefield”. Should we, the audience, who require a bit of hope and faith to enjoy watching television, lose our hope and expect to be in for nothing short of heartbreak in the future? That, again, we will discuss later. Somewhere I’ll also find space to discuss the weirdly specific prevailing trend of enforced Lander suicides. Is Kirei copying Kiritsugu? Is Urobochi copying Nasu? Either way, someone thinks they’re very clever, and that class is doomed for death by nudge-wink parallel.

Basically, nothing is okay, and ever will be ever again, whether we’re talking about the situation in the show or my emotional situation having re-watched the traumatic death of one of my first loves of the series. Hold onto your hearts.