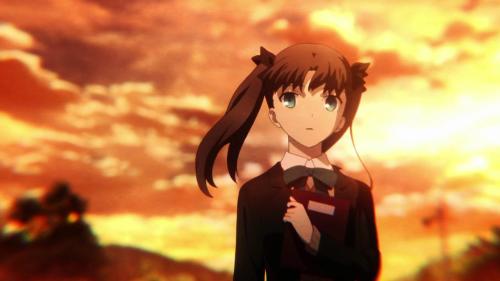 Dealing surprisingly well with the fact that they’ve all been nearly murdered and had their ideals, goals and everything that gave them drive and purpose in life thrown in their faces in last 24 hours, Shirou, Rin and Saber settle down to dinner to decide what to do about the impending end of the world.

Rin declares that she wants to avenge Archer—even if he was a dick to her, he was her partner (fair enough, I guess…). Shirou agrees that Archer would never let him live it down if he let Gilgamesh get away with his plot for the purge of sin and life from the earth as we know it. Saber is the voice of reason and points out that Archer feelings or otherwise, they should probably aim to stop the Grail forming because everything we’ve learnt about it so far does not add up to anything good. Which, again, throws both Saber’s goal and the generations-long initiative of Rin’s family into the waste basket, but both ladies are taking it in stride.

Rin’s halfway through pacing around considering this when she balks, freezes, and goes into a red-faced sulk that she retains for the rest of the episode. She lets it drop when she’s having a secret discussion with Saber, but when Shirou knocks on her guest room door to enquire what on earth is going on he gets nothing but the evil eye from the girl who’s supposedly his love interest and battle partner. For all Rin’s good graces, I felt like grabbing her (or the writers, at least) by the shoulders and shouting “There is no time to be tsun-tsun! The apocalypse is nigh!” 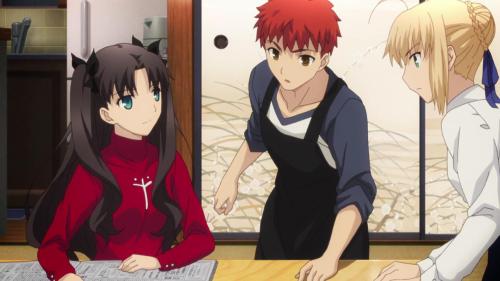 Now don’t get me wrong, there’s nothing wrong with the sugar and ice personality, and in Rin, who’s been forced to grow up very fast and simultaneously been stunted emotionally at about age eight, the occasional tantrum makes sense. She’s been raised by Kirei, for heaven’s sake, an unfortunately undeveloped relationship and backstory apart from a few mentions here and there, but it’s plain that she despises him. Combine that with his smugness and evil tendencies, and frankly I’d fling up a defensive, aggressive shield to stop him from seeing and lording over my weaknesses too. She’s grown up wearing a constant set of shields and masks and clearly has little to no idea how to deal with people once she gets within five feet of them.

The transition from this fire-spitting mess of defence mechanisms to a girl who’s more honest and in touch with her emotions could have been lovely to watch, but somehow I feel like we haven’t seen it. She’s had her tender moments, but effectively she always reverts to the status quo, and the Rin we see now feels like the same one we met in the prologue, which was twenty-one episodes and a hell of a lot of life-altering experiences ago. She’s been betrayed, nearly killed several times, been forced to reconcile with the fact that everything she’s been striving for is a lie, and has formed a close partnership and dare I say it romance with Shirou. Even Saber’s developed and subtly changed, and it’s not “her route”.

Alas, the peak of this romantic subplot is not, as yet, Rin opening up about her feelings on the eve of a battle, but an excruciating tirade of blushing and snapping and getting half-naked. Her plan, which Shirou also thought of and actually decided to communicate with her, is of course to send the next best thing to Archer in as Gilgamesh’s worst enemy. The problem is, though, Shirou is still far from levelling up enough to evolve into Heroic Spirit Emiya and has nowhere near the amount of mana it would take to summon and stabilise the Bladeworks. Rin does though, and can lend him some of it. What do we have to do, Shirou innocently asks? Rin hides in her hair and goes beetroot-coloured, as if she’s about to reveal something explicit. 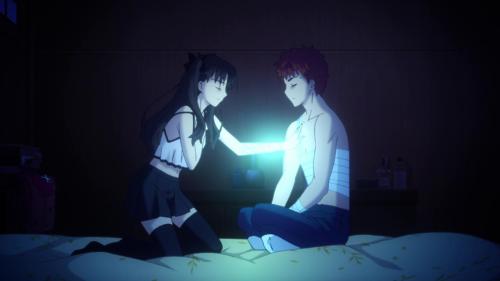 And, well… if you were unaware, I hate to be the one to inform you, but in the original visual novel, this is where a sex scene was shoehorned in. Mana can be transferred from person to person via bodily fluids, which provides a handy-dandy excuse to tear the clothes off the romantic lead in question at least once in every route. Years later with the Realta Nua re-release, as well as some touched up graphics and new music, the smut scenes that had been jammed in to increase the rating and (supposedly) sales were omitted and censored. This is the version of events that this adaptation has stuck to, though it creates its own set of problems.

Naturally, if the original writers created a convoluted reason for coitus to ensue, you have to come up with an even more convoluted reason for it to not, while keeping the mechanics the same. In this case, the mana originally gained from viewing a finely-drawn anime boob instead comes from a transplant of Rin’s Magic Crest… which actually contradicts the worldbuilding seeing as they’re supposed to only be able to be passed from heir to heir in the same bloodline, the entire point of them being that they’re the amalgamation of the family’s learning. Much as that bugs me, it’s a nitpick compared to the utter weirdness of the rest of the scene.

On one level, sure, I’m willing to believe that a transfer of magic is a very intimate thing. After all, there’s nothing more intimate than getting inside someone else’s head, and Rin’s certainly not happy that Shirou ended up waltzing through her memories—as well as an undersea psychic realm full of mutant marine life. But the way it’s all portrayed—right down to Our Heroes being shirtless, because obviously mana and body heat transfer more easily that way! Yeah, whatever—feels inescapably sexual. 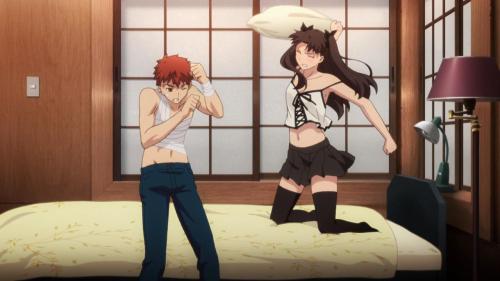 I understand that it’s a deep connection and a profoundly personal thing, but there could have been so many ways to play it off that focussed on emotional intimacy rather than physical, thereby detracting from the weirdness that Rin’s acting like they’re about to/have just slept together when in reality they barely touched. Fair enough, of course, because as mentioned before Rin is not used to sharing with people or letting down her guard, but to some extent it just felt ridiculous and overdone. The cherry on this ludicrous blushy cake is that, of all the mysterious snippets we saw in her flashbacks, the one we focussed on was when she first (presumably) met or saw Shirou. It drove home to me—and I was quite surprised to realise this—that as well as Rin having not really developed as a character, we haven’t actually learned that much more about her over the course of the series.

In many ways, she’s still a frustrating and frustrated enigma, and all Shirou can do is brace against it and the pillows she flings at him in her vicious embarrassment. It was a relief, frankly, to go visit Saber in the cool blue of the night outside, where she thanks Shirou for what he’s shown her, and promises to fight well so that they can end this and return home safe.

It was… less of a relief to visit Gilgamesh and the titanic gruesome mess that has become of Shinji, but certainly an ominous and delightful way to set up for the next climactic battle. Here’s hoping there is less blushing and more fighting.