Fate/Stay Night #18: Rather a Lot of Swords

As the old saying goes, you either die a hero or live long enough to see yourself become a villain. And then die, and then become a magical undead warrior, then come back to life as a Heroic Spirit and try to beat up your past self.

Once, it seems, there was a boy who longed to be a hero. He grew up with that in mind, chasing the ideal, trying to make everybody around him happy, but in the end his selflessness only led him to bitterness and misery, especially since his spirit was lifted after he died and he became something called a Guardian, supposedly a being that goes around sorting out the messes humanity wrangles itself into with all those human things like greed and wrath and stepping on each other’s toes. Somewhere along the way, said boy also grew about two feet, got a wicked tan and bleached hair, and his voice dropped so far he required a new actor. Don’t do magic, kids.

I enjoy that this series has enough respect for its audience that the words “Archer is Shirou from the future” are never actually uttered. There’s not even one definite reveal, not even in the flashback that Rin narrates near the end of the episode; you can just watch the characters put it together and force themselves to accept it, if they hadn’t already over the course of the series. The two gems, the projection magic, the Shirou-centric spite, and now “Trace On”—Shirou is literally at war with himself. Having been summoned back to the past (all the Servants are mythical or historic, but it doesn’t say anywhere that you can’t summon them from the future too…) Archer is on a mission for murder. Though not without dishing out some seriously demoralising berating first, about how stupid Shirou is for striving towards an impossible ideal, beating him down with swords. Is it technically masochism if you’re emotionally destroying an alternate version of yourself? 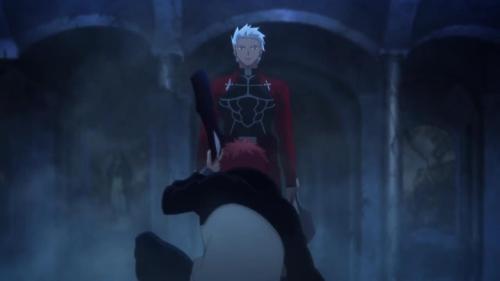 Saber, still trapped in her fashionably humiliating and torturous dress, pledges to protect the younger, more ginger version of Shirou despite no longer officially having a contract and despite how weak she is. Unexpectedly (but understandably, since Archer knew who all the other Servants were, and Saber would supposedly have worked with him), we also get a glimpse of Saber’s backstory. Only a glimpse, mind you, but it’s more than we’ve gotten before (it’s not her route, after all, but still, the lack of background to her is a little odd given that she’s our main character’s partner in magical warring…)—she had a dream, too, a set of ideals that she fought for tirelessly but in the end led her to a broken end, clutching a sword on a rainy battlefield covered in carnage. It seems eerily familiar to the peek we get into Archer’s history.

Perhaps she and Archer aren’t that different, and realising this Saber seems to feel pity for him, or at least a deeper understanding. But they can never get along, not when they’ve got Shirou between them. Archer also calls her “King of Knights” which is interesting in and of itself, and if you aren’t soul-bound to the franchise and in constant awe and worship of Saber as it seems to expect you to be, this sequence is going to leave you with far more questions than answers, and I’m afraid from what little I know of the ending of this route that you’ll be left scratching your heads. There’s no time for our little Saber; this is all about Archer, and the giant mess he’s trying to make.

Saber is effectively powerless to stop him, to her dismay, since she has no Master and no supply of mana. While the boys are battling it out, Rin sees a perfectly logical solution to this: Saber has no Master, Rin has no Servant, their respective versions of Shirou are being asses? Time to band together. Rin shouts out a summoning pact, Saber heeds the call and sprints across the room, and in a beautiful slow-mo sequence they unite, touch hands, and send the magic of Girl Power rippling through the room. Saber emerges from the mist back in her armour (thank God), imbued with mana thanks to Rin’s superior skills, and looking ready to break a man in half. 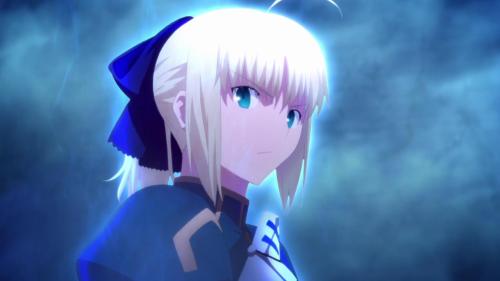 Archer twigs after a few sword-clashes that this is not good for him, and decides to break out the gratuitous English in full and summon his true Noble Phantasm. Is it his bow? That shield? Those black and white swords? Nope, it’s… well, it’s all of them, and many, many more. The world warps, and our heroes find themselves inside the titular Unlimited Blade Works.

And there we are in that foreshadowed, ominous wasteland of swords and gears, the sky burning and the entire place feeling barren and industrial. It’s Archer’s Reality Marble, a pocket of conceptual space that represents his inner world. That his inner world is full of sharp objects and on fire should tell you he’s not in the best of places emotionally, but if we’re getting into psychoanalysis of Archer now is not quite the time, since he’s flinging swords at Rin, Shirou and Saber. It’s eerily reminiscent of Gilgamesh’s attacks, except where Gilgamesh’s armoury is made of the original versions of every mythic weapon, Archer’s is filled with copies. Still, a copy is as good as the real thing when it comes to stabbing people. Shirou is having none of this, though, and launches out to deflect the rain of swords with his own projections, able to recreate the weapons just by looking at them.

That is, as superpowers go, quite spectacular, but he’s got a way to go yet. The next thing Shirou knows he’s face down on the church floor, probably a goddamn mess inside if we consider what happened last time he overused that kind of magic with little practice. Archer’s not looking too great either after that reality-bending exertion, so naturally he grabs a human shield. With Saber freed and properly clothed again, the role of damsel in distress apparently needs to be filled, which leaves Rin slumped in Archer’s arms as a bargaining chip after he gives her what appears to be the Vulcan Death Grip. He hops away promising she’ll be safe for 24 hours, but after that he can’t promise anything, partly because he’s being a terrible person, partly because even with the Archer class’ independence trait, he won’t survive without a Master for more than two days.

Shirou straight up challenges him to a fight at this point, all but smacking the man with a glove. Is it for Rin? For Saber? For the Grail? Is it to rid the world of this prideless, soulless traitor or die trying? It’s not immediately evident, but somehow, it feels like the most personal motivation Shirou has had yet. I guess you can’t get more personal than fighting yourself. Cu, still hanging out outside, agrees to help, though what his motivations are, aside from his little crush on Rin, remain unclear. Saber, I feel, is wise to distrust him, though I’m inclined to like the guy, and at least they have their beef with Archer as common ground.

Rin, meanwhile, ends up reliving the memories of and then facing off against the man himself. Archer lived, it turns out, exactly the unhappy, self-destructive martyr’s existence she’s been warning Shirou off this entire time, giving up his life and his afterlife and only getting an endless trail of death and despair as reward. It’s implied that, whatever ‘heroic’ act he committed (it most likely involved killing a hell of a lot of people), he was executed for it in the end, and even in death patrolled the earth as a Guardian, a mere shade and a tool of some sort of cosmic justice that isn’t explained but doesn’t look too crash-hot either. And here he is again, creating a cycle of despair, forced to look at himself before he stepped out on that path, and look at everything he ended up losing and destroying.

It brings a lot of questions into play: does Archer want to kill Shirou so he doesn’t have to suffer like he did? Will killing Shirou erase Archer from existence? Is he from a different timeline or a linear future, meaning he remembers and thus knows everything that’s going to happen? It probably shouldn’t be, but the biggest question that raises for me is what happened to Rin? She and Shirou are an item now, but what became of her as he turned into Archer? He obviously harbours some connection to her, since he’s carried that pendant around all this time, and it was intrinsic enough to his life that it was the catalyst that summoned him.

If that’s the case, Archer renders himself even more of an asshole for the way he’s treating her. It’s bad enough he reduced her to a meat shield, now he’s apparently selling her off to Gilgamesh and Shinji, for purposes unknown but unnerving. Only in the morning, though—the 24 hours of safety is the first promise he actually seems intent on keeping. Shinji is disgustingly delighted with the idea, and Gilgamesh is suspiciously quiet. He calls Archer a “faker”, in English again, as he leaves. All Rin can do is stare at her shoes, and Archer drifts off looking broody and purposeful.

Gilgamesh is also, apparently, up to something at the Ryudo Temple, as a little after-credits scene shows all the monks including Issei get hauled out by ambulances. Reportedly they’re in the same state as the other coma victims have been, which means they’re sapped of life energy. It also means the Temple, a known magical hotspot, is empty, and Gilgamesh looks too happy about that for it to mean anything good.

4 responses to “Fate/Stay Night #18: Rather a Lot of Swords”