This episode features two parallel bonding sessions and philosophical discussions between two Master and Servant pairs—one about achieving your dreams, one about the sadism inherent in art. Things are getting deep. Yes, even with said characters being the rambunctious spirit of an ancient Greek video game aficionado and a virgin-obsessed murderous fish man, respectively.

Waver awakes from a strange dream, tingling with uneasiness that he’s just seen something incredibly plot relevant. Masters, as we may remember from watching Kayneth squirm his way through reliving Diarmuid’s legendary love affair and sticky end, can experience their Servant’s memories in their dreams, which serves as a nice little tool for connecting them up and hinting at backstory while not having to have it occur in dialogue. It’s a flashback that serves a double purpose since it educates not only the audience but other characters, and strengthens (or withers) the bond between the owner and the viewer of those memories.

Whatever Waver saw has piqued his curiosity into the big lug snoozing on his bedroom floor, so he heads to the local shopping centre (“No pillaging” he orders the shocked Iskander, in a fun little extended Blu-Ray scene) to do some research. There’s probably nothing more awkward than your roommate walking in on you researching them in a bookstore, the same way there’s probably nothing sillier than picking up research from a book when the historical figure in question is your roommate. 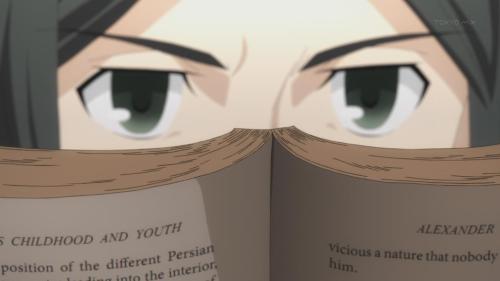 The book isn’t even accurate, it turns out—Waver disgruntledly demands to know why History says Iskander was short when he’s clearly the human equivalent of a monster truck, but Iskander just laughs it off and guesses that they got it wrong. As long as people remember him, the details probably aren’t important.

An interesting thing to bring up, since Waver started on this whole magical journey chasing a rise in reputation, joining the Grail War for some recognition. To shake the foundations of the mage hierarchy by proving someone from a lower-tier family could do it, sure, but the main thing on his mind was that that someone would be Waver. What has it brought him so far? Death threats, horrific sights, constantly being flung left right and centre across the sky in a flying chariot.

When Iskander first asked about it, he passed Waver’s motivations off as ridiculous. Iskander’s ambition to become human again and try to re-conquer East Asia and beyond seems pretty crazy too, but the point arises that it’s a dream of Iskander’s, something he held close to his heart, symbolised in the memory—which turned out to only be a daydream—Waver saw in his dream. Iskander was pursuing the horizon until he reached the ocean, and even if he never got there, every step in that direction was propelled by Iskander’s personal desire and ambition. He was fighting for the glory of his people, yeah, but first of all he was doing it because he wanted to. 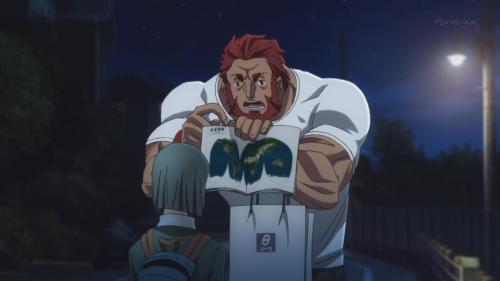 He points out, gruffly and almost protectively, that Waver risking his life just to impress other people is a dangerous, destructive and wasteful attitude. Is it the attitude ingrained in a mage’s upbringing? There seems to be a lot of “glory to the family and the ultimate goal, never mind the individuals” going on in the Tohsaka and Matou families, so it makes sense that that kind of ultimately self-destructive thinking could have latched onto Waver like developmental moss. And Iskander gives it the finger. You should pursue your own dreams, whatever they may be, and to hell with whatever your contemporaries and history may think of you.

It’s all very well that he can say that, Waver grumbles, because history thinks highly of him. Iskander responds by pulling out his faithful map book and telling him to point the two of them out on it. Compared to the world, they’re both insignificant specs you can’t even see. So chill out, dude, and have a little faith in yourself. Iskander clearly does, and it’s really quite heartwarming to watch. Has anyone ever given Waver a motivational speech before? Has anyone ever validated his existence simply because Waver is Waver, and not because of what he has or hasn’t achieved and what effect it will have on the world?

I repeat: mage society is a screwball that clearly begins damaging people the instant they’re slotted into a role within it. And I also repeat, Iskander is wonderful. Their little moment of almost brotherly bonding is interrupted by a pulse of mana, though—and they rush to discover that Gilles and Ryuunosuke are up to no good (to everyone’s disgust, but no one’s real surprise).

The two of them have spent the day moping in their now burnt out murder dungeon, and waxing philosophical about religion. Ryuunosuke laments that this is God punishing them for doing bad deeds, to which Gilles points out that back in his day, he did all sorts of terrible stuff, and God didn’t do jack about it. It was people who murdered him for his depravity (had him executed, rather), thus he concluded with his fish-eyed logic that God doesn’t care about evil because He sees it in motion all the time and doesn’t do anything about it. He probably doesn’t care about humans at all, since he lets them destroy each other.

Ryuunosuke counter-argues that God lets bad things happen because He loves humans—the entire world is an eternal screenplay He’s working on, invested in every single character and motion, for the entirety of human history. And how could He keep his focus and dedication if He didn’t love us, blood and guts and all? The blood and guts make for good drama and pitting humans against one another keeps the story interesting, and the blood and guts can’t be disgusting or depraved because all that destruction and awfulness is a creation of God too.

This is (while also being ridiculously meta. Yes Urobochi, we see what you’re doing there. Writers are gods and assholes) a strangely compelling theory of religious philosophy. I’d be more interested in the teachings if they weren’t coming from two psychopathic mass murderers, though, who then decide with aforementioned fish logic that the greatest thing they can do to worship The Almighty Creator is to make the most disgusting, blood-splattered display of chaos ever seen.

And so, whooping with joy, they head to the river, where Gilles promises to give Ryuunosuke “the greatest COOL he’s ever seen” (“cool” in English for effect and, in Gilles’ case, an extra ounce of unnerving surrealism) and promptly summons a gigantic octopus demon that engulfs his body and takes up the entire river.

So, we’ve witnessed two Master-Servant pairs growing closer together. It’s really nice to see them bonding and working out the differences between them wrought by time and personality. It’s less nice to see one of those friendships resulting in a ravenous Lovecraftain monster, but that’s just my narrow worldview talking.

Either way, the appearance of said Cthulhu-cousin is what marks the end of the first season. Yep, we had an episode full of dialogue, and a cliffhanger smacked upon us in the last five minutes. It’s not the most delicate way to do a season finale, but considering the show was only split in half so they could dedicate more energy and budget and make it as good as it could be, I will forgive them. I will also pity the people watching this when it originally aired who had to gnash their teeth, agonised as only TV can inflict, and wait three months to find out what happened next.

Speaking of which, Fate/Stay Night returns this week, so what has become Fate Mondays will swing their focus back to the episodes of that! Time to check on the kids.