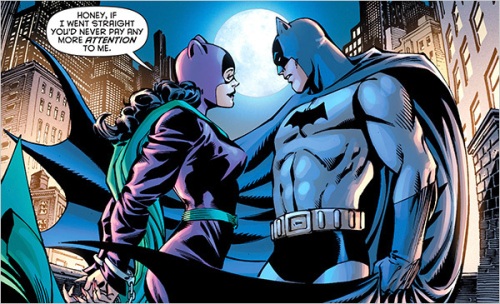 What is this feeling, so sudden and new?
I felt the moment I laid eyes on you?
My pulse is rushing… my head is reeling…
My face is flushing–what is this feeling?
Fervent as a flame
Does it have a name?
Yes… loathing!

Many would say, from both a point of view of literary interest and from one of “ooh, that’s fun”, that the only thing more exciting than hero-villain parallels is hero-villain sexual tension. It’s certainly all over the place, both beamed there by the minds of the audience and planted deliberately by writers and company. Now, as the mantra has become on my little corner of the internet, sometimes this is an interesting thing to play with and sometimes it leads us all into iffy territory. What could possibly be wrong about the idea that two characters who hate or oppose each other secretly (or not so secretly) wanting to make out?

Well, on one side of the coin, nothing—sometimes it makes for a fascinating dynamic between antagonist and protagonist, especially if what they’ve got between them is a previously-established relationship. Maybe they were married before things went awry, like Mal and Dom in Inception, and now with the hero’s connection to the Big Bad of the psychological dreamscape, everything is just a little more interesting. The hardest demons to face would be the ones you once, or still do, loved, after all. Dreamworld Mal is a warped shadow of her former self, but it doesn’t change the fact that Dom’s story and action is intrinsically tied to her. With his subconscious drawing her out to mess with the adventure, it not only raises the stakes but creates a character-based chain reaction plot, which are oft more engaging than ones driven by outside forces.

So Inception has its bigger mission, but even if you can’t wrap your brain around all the layers and are addled by the intensity of the soundtrack, you do understand the human element that is Dom’s conflict over having to fight against his wife. It’s awkward when you have to face off against a saboteur when you can’t help remembering smooching them, you know! It goes deeper than that, but often that’s the basis for these love-hate-hero-villain dynamics. Sherlock and Jamie Moriarty in Elementary encounter the same problem, with the added bonus that their relationship was all part of a villainous ploy in the first place. Aside from Joan Watson stomping between them with all her cleverness and “You stop that”, they have a genuinely twisty-turny dynamic where their past draw to each other is always kind of buzzing in the air.

As opposed to, if you’ll forgive me comparing them again, BBC Sherlock’s version, which teases some sort of attraction between Holmes and Moriarty, only to have it never be fulfilled nor relevant to the plot (and they even make fun of the fans that pick up on it and do enjoy pairing them up, but I’m going to hyperlink instead of making you all listen to be moaning about that again). Writers have picked up on this thing, yes? Protagonists, antagonists, underlying sexual tension that can never be realised because they’re on different sides? It’s beautiful drama. Though the case is rarely a Romeo and Juliet saga and more of a power play, with plenty of puns about flirting with danger. Especially if you’ve got one character who’s happy to exploit it and one who is grumpily standing by while it happens. Often your Catwoman to your Batman—and yes, it is delicious fun having them banter, dance, and then rob each other.

On the other hand, though, this trend can wander easily into nasty implications. Like I said before, writers often prod at the idea as a ship tease with no intent of actually exploring it, mostly as a titillation tool or something to make the playoff more interesting. Or even make the villain seem more villainous, especially if it’s two characters of the same gender facing off—the villain is often the one who flirts or acts openly sexual around the hero, whether in a predatory or playful way.

It makes things more tense and is often uncomfortable, mostly because the hero’s made uncomfortable by this, and thus once again being perverse is equated with evil. Now that on its own is not a bad thing, as we want to enforce that invading people’s personal space and what have you is bad, but making queer hero-lust and the confidence to act on it a clichédly villainous trait kind of feeds into that whole “oh no, the evil queers!” thing, and I think we should all agree that’s not a positive thing to perpetuate. 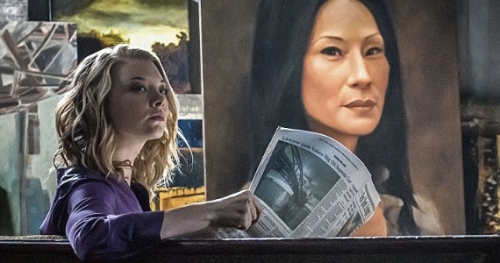 Nor should we be teasing these dynamics as sexual or romantic so often in the first place. People are going to ship what they’re going to ship, and no one can take that away from them, but jumping to the conclusion straight away in the text that obviously all hatred is a mask for underlying desire is… iffy, to say the least. Almost the same problem as the tsundere archetype brings up, kind of creating the message through media that aggressive or hurtful behaviour is just hiding someone’s true feelings, and obviously those two characters beating each other up really dig each other but don’t know how to say it. Equating violence with love is not a positive message to reinforce.

I think people are entitled to draw whatever conclusion they wish from watching characters interact, but I also think there’s something problematic lurking in our media obsession with this idea of violent sexual tension. Yes, it’s fun to watch two characters who you want to smooch spar with each other. It’s fun to watch them play off each other with their secret or past affection in the mix. It’s fun to tease the fans by making your nemeses play footsies in promotional art. But it can definitely go too far.

I think if you’re going to fuel a dynamic of love or lust between opposing characters you want to flesh it out fully and make sure you establish, at some point, that what you’re doing is not a model for a celebrated romance (Dom acknowledges that his relationship with Mal is unhealthy and that he has to let her go, Bruce Wayne and Selina Kyle stop stabbing each other in the back and actually end up working together [in some instances of the comic and movie continuity, of course]). And you want to give it more depth than just something titillating or a device to prove that the villain is villainous by making them act creepy towards the pure good hero. It’s all about the handling. If you want the dynamic to be interesting, you need to make your audience believe in it and do so in a way that explores all the intriguing facets this trope opens up.

Or, you know, you could just be content having characters hate each other. That’s also lots of fun.