Fate/Stay Night #6: And Then There’s This Asshole 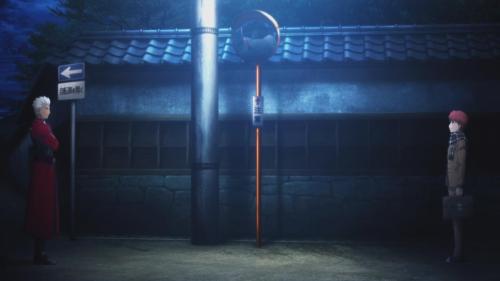 This episode is all about bonding and relationship growth: Shirou goes on a magical treasure hunt around the school with Rin, shares expertise with Saber, challenges Archer to an impromptu pit fight and learns a little bit about what it means to be a Servant, and comes head-to-head with the third mage among the student body and somehow resists the urge to kick him into the nearest garbage receptacle.

This instalment was somewhat of a mosaic, made up of short sharp scenes that were all important in different ways, but whether or not they flowed nicely into one another is a matter up for debate. Again, it could seem like a “weh nothing happened” episode but really, an awful lot did, it just didn’t get climactic until the end where Caster and Assassin pop the hell out of nowhere and start messing with everybody’s business. Again, what is flow? No matter. The jarring nature of the switch from ominous shots of wires sneaking through the night towards our slumbering protagonist to hallucinogenic images of ships and daggers to oh, hell, I’m in the Temple and there’s a pretty lady trying to steal my magic circuits did serve to emulate the shock Shirou must be feeling.

So now, we’ve got all the Servants assembled, though we don’t know exactly who’s working with whom. Though we do know that one of them is in tandem with our oily friend Shinji, who I must say the animators and co are doing an excellent job building character for. Even discounting everything I already know about him, just from his introductory scenes so far I’m entirely compelled to kick a can of Mountain Dew down his throat. Sakura’s related to this guy? No wonder she spends so much time at Shirou’s place. At last something about her makes sense. 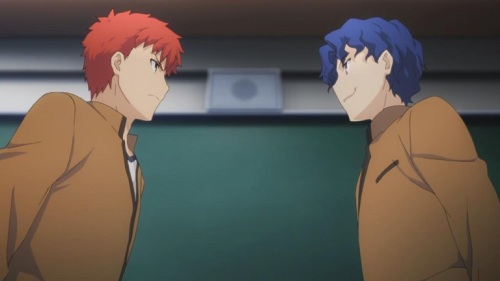 Actually, a lot more things are coming together now, which is why I’m glad, disconnected or otherwise, that this episode took the time to dedicate some focus to detail and actually flesh out some characters and things. Shirou’s strengthening magic, for instance—we now understand that he analyses the inner components of an object and can make them greater, be it brighter, harder, better, faster, stronger, or what have you. He does mention that it works better with bladed objects like knives, which is rather interesting. A complete infodump is averted by his flusteredness at having Saber right there in his face, so they achieve a balance of bonding and exposition.

The same goes for his conversation with Archer, though you couldn’t call it ‘bonding’ so much as them actually interacting solo for the first time and establishing fairly comfortably that they aren’t fond of each other. As well as making way for some discussion about Servants: according to Archer, they aren’t summoned into the War with their consent, except in Saber’s case (and he knows this how? Hmm), they’re simply people whose acclaim promoted them to Heroic Spirits in death, and thus the Grail can pluck them forth any time it or the Masters see fit.

It doesn’t sound like a very fair package, and Shirou’s quite distressed by this as he doesn’t want Saber doing anything against her will. His care for her is quite sweet, and all their communication is refreshing if you know anything about Fate/Zero, and even if you don’t, it’s just nice to see them cooperating and respecting each other despite them being thrown together into such a horrifying situation. Even if he does have his blushy-blushy-cute-girl-oh-no moment in the shed, you get the sense they’ve got a pretty solid platonic relationship going on without much tension. As opposed to Rin, who’s having her own blushy-blushy-cute-boy-oh-no moments, but that’s another story. 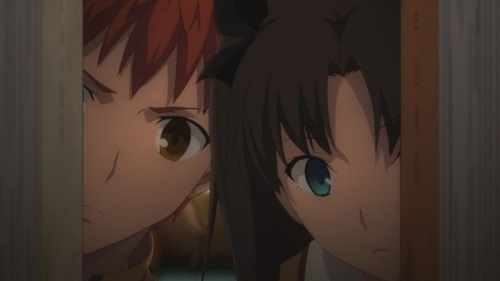 So far all that’s been scattered liberally enough that it doesn’t feel grating. All the Masters we know so far are teenagers, but it’s not as if the show is becoming a high school drama. It’s certainly a different dynamic throwing a cocky seventeen-year-old boy into the mix, though. When Shinji crows about his family history, you get the sense that there’s something he’s not telling us, a lovely hint of retch-worthy bitterness in his gaze and body language under all that beloved-sleazebag-across-the-classroom bravado. Again, we haven’t seen much of him yet, but it’s already painfully evident that he’s self-entitled and enjoys riling people up, and him discussing Ayako being found with torn clothing in a back alley with a smile should have set off douchebag radars everywhere.

He’s a skeezy schoolboy. He’s someone to avoid on the playground as you traipse towards graduation. Is he someone you want to see given large amounts of power, and indeed, the opportunity to win unlimited power? Perish the thought. The fact that he’s also got history with Shirou (and is Sakura’s brother, who Shirou is clearly very protective and fond of) throws an extra intriguing spanner in the works. Frankly, I’m surprised Shinji didn’t throw something at the back of Shirou’s head as he walked away, but I suppose we’ll have to wait to see what the greasy little fellow has up his uniform sleeve.

Caster’s certainly adding a sudden adult element, bringing us back out of our hallway headbutting and friendly magic practice into the icy waters of reminder that this is a deadly magical war. Who’s her Master? Another mystery arises, and it doesn’t seem it will be answered any time soon, seeing as she seems perfectly capable of working on her own, or at least, perfectly comfortable with kidnapping young men via hypnosis and happily threatening to rip out their life force. The ensuing battle should certainly be fun, now that we’ve got four Servants on the board at once… and Shirou caught in the middle, like the plucky damsel in distress he is.

One response to “Fate/Stay Night #6: And Then There’s This Asshole”