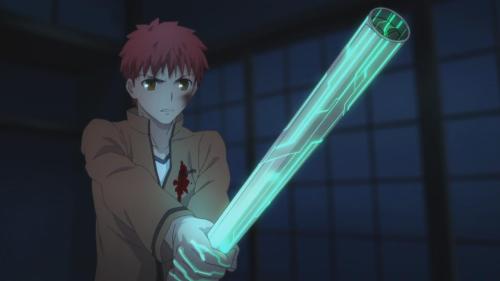 This week, that mysterious redhead gets an identity, a tragic backstory, some friends, heroic ideals, and a spear through the chest. Fun stuff, right?

Episode One literally runs parallel to the prologue—we see the same three days and sequence of events, but focussing this time on the character Emiya Shirou rather than red-clad Rin. It becomes apparent fairly quickly that these two have more in common than sharing a high school year group and a story world—we meet them as they wake up from a memory woven into a dream, shadowy and with heavy implications of sadness, then follow them as they embark on their daily routine through a double life of ordinary existence and magic practice.

This post makes a very interesting point about how Rin’s house acts as character-building for her; prim, proper and almost impersonal as a museum, giving the audience a sense that where she truly lets her personality out is the cluttered cellar where she does her magecraft. It’s the same with Shirou: like her, he’s been left in a huge house all on his own (though he has a close friend, that ever mysterious and adorable Sakura, and the eccentric landlady’s daughter, Taiga, to keep him company and eat all his food) which, though well-kept, has a sense of being an empty shell. Shirou retreats into the mismatching shed to hone the one bit of magecraft he knows, looking into and strengthening the mechanical components of objects. Sometimes useful for being the school’s repairman, sometimes good for defending yourself when superpowered men in blue come after you with long sharp sticks (and is visualised in a way that’s really cool). 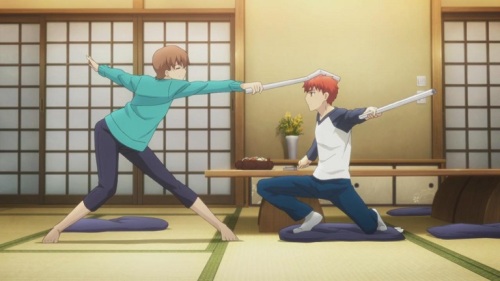 Both Rin and Shirou are chasing after the dream that their respective late fathers left behind, which, in Shirou’s case, involves becoming a Hero of Justice and saving people, just like his adoptive dad Kiritsugu saved him from the mysterious and deadly city fire that hasn’t exactly been explained beyond being an orphan-maker. His motivation is told somewhat more than shown, but that’s due as much to Shirou’s dramatic internal monologue as it is to him actually having some semblance of family friend around to tell it to us (no wonder these kids have grown up so quickly. They need an adult leagues more functional than Taiga).

The influential Kiritsugu himself is no longer around, though we do get some succinct little flashbacks to when he first takes Shirou home. Whether or not you’ve come here from Fate/Zero, you immediately understand that this is somewhat of a broken man, gaunt and faceless until later in the scene, characterised only by his droopy, then hopefully smiling, mouth, and depressed stubble to rival Bucky Barnes. Much like Rin’s father, all we have to go off is their rose-lit memories and current idolisation of these men, and some shots of characteristic facial hair (the chin-shots are kind of cute, really, as they put us in the child’s perspective: i.e. literally looking up to this guy, because they’re itty bitty at the time).

It’s an immediate parallel between the two of them, though the sides of the mage world they come from are very different. Definitely something we can expect to collide later on, now that the two prologues have intersected. We’d have to wonder what Kiritsugu and Mister Goatee would think of this rendezvous so far, given that they were out to murder each other in the previous War. Buuuut we don’t know that yet, do we? 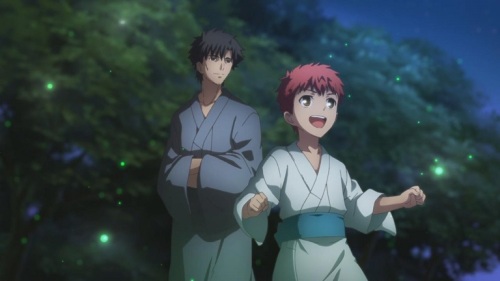 It’s always interesting seeing Shirou… well, it’s always interesting seeing Shirou. In the prologue he was faceless, in the visual novels he barely appears since it’s all shown from his perspective. Animated, you get a better sense of his character through expression and body language, which applies to other characters as well. Shirou’s friend Issei is rigid and composed as a statue, in comparison to his somewhat complicated frenemy Shinji, who moves fluidly enough to remind you of some sort of oily liquid. Through Shirou’s eyes we get a closer look at characters we glimpsed in Rin’s prologue, including an unfamiliar and rather ominous young lady who informs him he’s going to die if he doesn’t summon someone soon.

This is clear as mud to Shirou, and I’m pretty sure it’s even murkier after he crashes, wounded and pursued (but holding his own! With a magically enhanced poster!! Go for it, lad!) into his shed and, with a perfectly justified rant that he won’t die twice in one night, least of all when he’s got so much he still owes the world for being saved that first time as a kid, activates the magic circle there. Pop, suddenly there’s a cold and professional armoured blonde standing above him, throwing around terminology like Master and Servant and Command Seals and, probably most importantly and to the most of Shirou’s shock, expertly flipping the attacking Lancer across the lawn.

Saber, it seems, has had enough of Irish spear-wielders, and has no time for their cursed weaponry even if it does reverse cause and effect (which I really hope will be explained more, because while it looked awesome it would be good to nut out some of the actual lore attached). 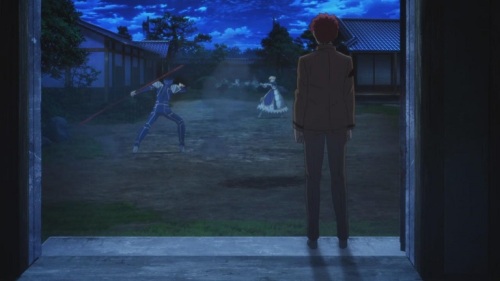 However, with the ominous and velvety voice of Kirei calling to us in the preview, I’m fairly sure we can expect a bit of exposition in the next instalment, which will be nice for those that are engaged in the story but at this point becoming quite befuddled. Tune in next week for more heroism!