Marvels of Marvel: Guardians of the Galaxy

{‘Hooked on a Feeling’ playing in the distance}

I usually review TV series for my ‘Alex Watches’ category, but I thought I’d branch out into something that’s effectively the same thing, but each episode is a multi-million dollar action movie. Welcome to my fond scrutinising of the Marvel Cinematic Universe! I’ll be working my way through the franchise backwards, poster character by poster character, starting at the top, in space.

First of all, let me say I had no idea what to expect from this movie except for everyone who’d already seen it whooping into the internet about how much fun it was, and the knowledge that this is the one where Marvel genuinely stopped giving a crap. Obscure comic series set in colourful outer space, starring a green lady, a gun-wielding racoon and a talking tree? Hell yeah. We’re making enough money we can do whatever we want, inherent silliness and marketing issues be damned.

Looking at The Winter Soldier, the movie that came out before it, I really can’t think of two parts of the same series that manage to be more different. The Winter Soldier is overtly grounded, cinematography, colouring and setting all building up a recognisable and sober atmosphere, as well as a (comparatively) character-central plot. It feels localised and steady, in grey tones and with subdued character designs and a believable world. Guardians of the Galaxy is set over a huge stretch of rainbow-hued space, where wacky hairdos and painted skin are enough to classify you as alien and the bad guys are dramatically intent on world destruction. It’s saturated and bright and full of 1970s and 80s dance music, and generally has an air that’s nothing short of playful. And did I mention the smart-talking, angry raccoon?

That’s not a criticism, to clarify. If every movie was The Winter Soldier, The Winter Soldier wouldn’t stand out as the piece of beauty that it is. One of the wonderful things about Guardians is how unashamedly wacky it is. It knows it’s a crazy, fun space adventure comic about the power of friendship and pop music, and it doesn’t try to be anything else, and because of that ends up feeling significantly less silly than a million and one other action movies that try hard to be serious.

Let’s get to the crux of this though: the guardians themselves. The old “ragtag bunch of criminal misfits that start off hating each other but cooperate begrudgingly and eventually become super best friends and fight for the greater good rather than their initial selfish desires” shtick. Which, again, is not necessarily a criticism because Guardians feels very self-aware, and Rocket even points out the stupidity and sappiness of them all standing together promising out loud to fight for what’s right. It’s always refreshing to have the voice of reason come from the talking raccoon. But hey, as Rocket points out (drunkenly), he didn’t ask to be made. If I was a disgruntled illegal cybernetic experiment, pretty sure I’d be making snarky comments too.

This kind of becomes a theme of the movie—family, and what it means, and how it’s screwed each character over (except for Groot, who is a tree, but maybe he has interstellar daddy issues of some nature too). Gamora has beef with her adoptive ‘father’, who’s turned her into a human weapon and used and abused her and her sisters her whole life; Peter Quill not only has his lingering heartbreak over his dead mother to mull over but his conflict with the scavengers that took him in and are “the only family he’s got” despite being total assholes; Drax is on a mission of vengeance after his wife and child were murdered. They’re all tied to their familial connections in some negative way.

Of course, by the end of it they all come out and kind of make their own family, which I admit was a little cheesy (that being said, the whole “We are Groot” part killed me) but I do admire those narratives—the ones that don’t place all weight on biological relations, or the family that raised you, and give the characters the power to fight back and escape to a place where they’re happier and build a sense of family based on love and trust rather than the people they grew up with being the be all and end all. It also addresses the issue of grief and the weight of it, while also pointing out that it’s no excuse to do awful things. Overall, despite how much Nebula and her potential sister-vs-sister plotline got shafted, it came up pretty positive and well-handled on that front.

Nebula does get shafted something spectacular though, doesn’t she? There was such bountiful potential for her as a foil to Gamora, and I’ll have you know I go weak at the knees for a well-executed hero-villain parallel, especially when there’s family rivalry or pre-established relationships involved. But alas, she and Ronan were doomed to be flat, blue villains. Thought-provoking to note that the antagonists in the MCU can either be the most or least interesting thing about the movies. 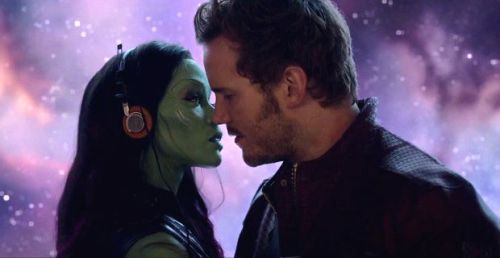 Gamora is certainly an interesting character, if slightly harder to immediately relate to as the white earthling man. Whether or not it would have fit neatly into this movie, I think the series (because hell yeah it’s getting a sequel) would benefit from treating her as more of a protagonist, perhaps in duology with Peter Quill. There are a series of clean-cut parallels between them, after all—both lost their home planets as children (Gamora’s was destroyed, Peter’s was removed from underneath him when he got beamed up) and were taken in by alien adults who used them and trained them into one of them (Gamora a space assassin, Peter a treasure hunter). They both have an abrasive relationship with these pseudo adoptive families, Gamora more than Peter, but nonetheless. They’re both kind of on the run from their feelings and trying to make their way in a selfish existence besides kind of being nice people on the inside.

And I mean, if they end up together (and it’s looking inevitable. Can’t resist that pelvic sorcery for too long, after all), I’d prefer they be on equal grounds, as opposed to wrangling a character as potentially fascinating as Gamora into a love interest role. And especially if it fits the “cold woman shocks playboy hero by taking none of his crap and forces him to reform” trope, because lord. If Peter Quill’s going to break out of his weird spiritual-love-child-of-Han-Solo-and-Tony-Stark womanising rogue streak, I’d like there to be a little more to it than simply diverting his attentions to the singular cause of Gamora, who is eventually worn down so they both realise they’re not as dickish as they initially believe they were.

Verdict: totally excited by how the MCU has branched out into deep, colourful, silly space, and taken their crazy-good continuity with it. Where we go from now, well, I can’t even say the sky’s the limit, because we’re already blasting off through the atmosphere. Next time though, give me more Gamora.

Also, if you can regrow Groot from a few stems, does that mean you can have multiple Groots from the same original? Can we please have a whole greenhouse of tiny dancing Groots?

Tagged as Guardians of the Galaxy, Marvel, MCU

3 responses to “Marvels of Marvel: Guardians of the Galaxy”