I’m really bad at reading subtext, okay. If two characters have got the gay for each other, you have to tell me outright, otherwise I’m going to fall into the complacent mistiness of believing they really are Just Friends. I have no problem believing, for example, that someone would damn themselves to an eternity fighting in a time loop to save someone’s life out of platonic love. Friendship is magic, alright, and we need more narratives that show the power of non-romantic relationships. That being said, we also need more queer representation, and the two can often get tangled up in a weird sort of meta limbo.

On the one hand, I’d love to see a canon queer relationship on TV, on the other, I’d love to not have any fictional relationship in my face without proper build-up—it’s the old conundrum: people adore love stories but aren’t comfortable with couples, and thus writing them goes in all sorts of strange and dramatic directions. It’s better, then, to draw out the possibility of a romance for as long as possible, making the audience believe in the pairing and support it, so that when they do get their happily ever after it’s much more satisfying. There’s an art to teasing something like that out, but, unfortunately, it runs into and can cross over with a nasty little practice called queerbaiting, dangling the possibility of a non-traditional-heterosexual-straight-as-white-bread romance in front of the audience without there ever being a chance of it actually happening.

Sometimes, it’s difficult to tell where one begins and the other ends. There’s also an important distinction to make between authorial intent and audience interpretation—the audience is quite within their rights to take the relationship between two friends (or enemies, for that matter) and interpret it as something romantic or sexual, and do with it what they will in their own hearts, minds and internet dealings. That’s what fandom is about; taking the source material and playing with it like putty, stretching and squishing it to explore it from every angle, especially ones the writer didn’t or wouldn’t themselves. However, there’s a gulf between the audience reading into things their way and the writers deliberately putting something there to be read. Which they do not always do with the best intentions.

In this Communication Age, creative professionals can be much more in touch with their audience, through Twitter conversations or blogging or, shock and horror, carousing through fan blogs and sites to see what exactly tickles the pickle of the vocal majority. Naturally, people have picked up on the slash pairing Thing. In a perfect world, someone might say “Hmm. All these people are digging to find gay subtext in these shows… perhaps they’d like some legitimate queer representation in their media”. However, what we often get is “Hmm, they like attractive characters of the same sex gazing at each other” and endless, slightly tongue-in-cheek ship teases emerge between popular pairings. Now, the trouble is, we must not be too quick to damn this practice as a whole, because as previously mentioned, ship teasing is the business of TV writers. What leads this horse into iffy territory is when the ship being teased is simply being teased as a hook and line for audience intrigue (specifically, fan reactions) and there isn’t any chance of the characters actually getting together.

It’s really rather convenient—the longing, homoeroticism-soaked gazes please the fans who are into that, and those who aren’t don’t have the portrayal of an actual gay relationship to complain about. If any moral guardians come banging on the writers’ doors, they can simply wave them away saying there’s nothing actually going on there, because there isn’t. “If anyone cares,” says Sherlock’s John Watson. “I’m not actually gay.” Perish the thought, because that would be far too much for prime-time BBC to handle (which is a stupid argument, because Captain Jack Harkness exists), but the writing team are certainly having a good giggle about it. Well, that I can’t vouch for seeing as I’ve never been to one of the Sherlock writing rooms, but you have to admit, there’s an awful lot of “no homo” “yes homo” going on in their product.

Maybe it’s all going to come to a head and John’s sexuality will bloom to the surface to be explored and he, Sherlock and Mary will skip off into the sunset in a polyamorous crime-fighting marriage. But that does not seem overly likely—Sherlock simply isn’t that type of show, and to keep its sense of drama and place in the mystery genre, it couldn’t retract too much into the romantic identities of its characters. And also, I have a sneaking suspicion that Moffat and co. are cackling about the entire John/Sherlock business. Cancel the ‘sneaking’ actually—I mean for crying out loud, they had an entire segment devoted to mocking the ideas of a fangirl who thought Sherlock and Moriarty might have eloped in the first episode of season three. 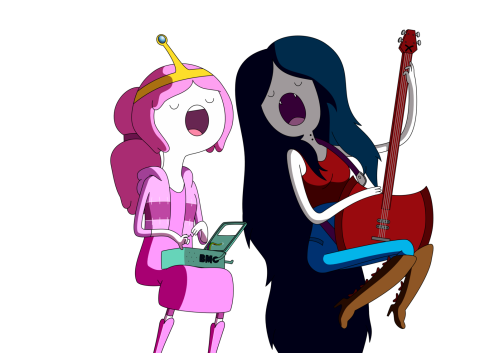 Of course, there’s a difference again between planting sexual tension between two characters and not pursuing it because ha, oh those fangirls, and not shining a beacon on the gayness due to censors or plot irrelevance. Reportedly, the latter is what’s going on in Adventure Time of all places and Princess Bubblegum and Marceline are basically as dating as they can be without the network expressing it outright (because heaven forbid we have magical lesbians on our children’s TV). Does it fall into the irritating category of “It’s gay but we’re not gonna say it” narratives even if the original authors have the best intentions?

At what point does making something ‘subtext’ become an attempt to bury it, fending off potential accusers and planting those that do notice and speculate safely in the ‘fans reading too much into things’ box? Anybody who isn’t looking for it probably won’t pick up on the girlfriend element, leaving you with a deep friendship if you see it that way and a cute girl-girl relationship if you notice it’s there. Does everybody win, or lose?

Anyway, that’s exactly what happened with me and Madoka Magica—hence the title of this post. I was willing to accept that, when Madoka proclaims Homura was her very best friend through countless universes, they were just Very Best Friends. Even if this proclamation was made in the middle of a nude hug surrounded by cosmic rainbow glitter, which I recall someone saying is “the gayest heterosexual thing” they’d ever seen. Subtext is tricky with cute teenaged anime girls, okay? They hug and blush and sparkle and warp the universe for each other all the time, how am I meant to know if you’re giving me a heartwarming story about the power of friendship or a powerful tale of magical lesbians dying for each other? Or just fan service?? 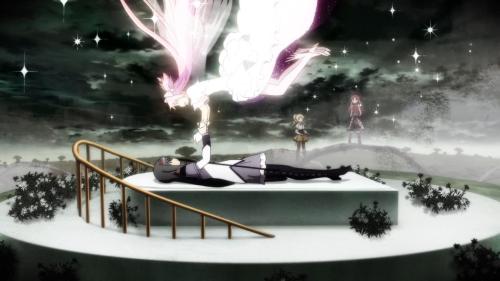 The question was answered in The Rebellion Story movie with a pretty forthright declaration of love (and desire) from Homura… right as she turns into this universe’s version of the Devil incarnate. So, oops. That confirmation of queer representation aside, I’d really rather have kept the original ending and ambiguity of their relationship status (which, in Facebook terms, is definitely ‘It’s Complicated’ right now) and not had anyone become an evil satanic lesbian. Which is also a problem canon queer characters run into… sooner or later, clichés prevailing, they’re going to end up dead, evil, or heartbroken, or all one after another. In the current mainstream media climate, we kind of have to choose the lesser of two evils: deliberately ambiguous and teasing, or out of the closet and slammed into Hell?

Another thing to note with Rebellion Story is that it is a sequel movie to the series, and only confirms the romantic (at least on one side) nature of the relationship then… indicating that the original show was too afraid to press the Actual Queer Love Story button, for fear of the reaction and a possible bad, gay mark against their name. Now that they’re writing to a pre-established fanbase, they know what to lean on. Does that make it fan service, then? Is it still representation if it’s just to please the viewers? Was it really worth all that emotional build-up and teasing if you were just going to make their canon relationship a cosmically abusive one?! Is that in itself spitting in the fans’ faces for wanting it?

Sherlock and John (Dean and Castiel, Stiles and Derek etc.) will still be gazing at each other through a haze of testosterone and cute animated girls everywhere will be complimenting each other’s boobs and declaring their undying devotion, and I will still be sitting here sighing quietly, lying in wait for a legitimate—and healthy, please—queer pairing to come out of all the silliness. Not saying that they don’t exist (it always comes back to Cecil and Carlos as an example of teasing and build-up that managed to a) not be obnoxious and invasive to the story and b) actually lead to a relationship) but they’re certainly rare, and overshadowed by the more popular/mainstream or at least louder series that play the game of teasing and baiting. Unfortunately, I think for the most part we’re still going to see a lot of platonic naked space hugs for a good while.

22 responses to “Subtext and Space Hugs”